“When formulating an idea for a painting, my memory plays a vital role as I bounce the idea around looking for connections and echoes. Often an Old master painting will emerge in the equation as an indicator of the direction to be taken.

I was reminded of this intrinsic quality of memory and contemplation in painting when completing a series of pictures called Odalisque I & II. These paintings were inspired by specific paintings by Matisse and Picasso who were themselves returning to a classic theme immortalised by old masters such as Ingres and Delacroix; namely pictures of idealised women in eastern dress couched in lavish surroundings.

But what was of interest to Matisse, and also myself, was not the exoticism of the subject matter, but the expression of a feeling of leisurely contemplation, of allowing the mind to expand, of time compelled to stand still. The extravagance illustrated in these paintings; the marble, the gilded drapery, the lush silks, represent the richness of the imagination when explored at a measured pace.”

Odalisque I (left) and Odalisque II (right), by Peter Nixon

ABOUT THE ARTIST
Born in Lytham St. Annes Lancashire in 1956, Peter Nixon’s direction in a career of art was first realized as early as the age of four. At nine years old Peter visited his first museum, the Royal Academy of Art, London England. Here he would see Da Vinci’s Virgin and Child which would have a profound effect on young Peters Artistic development.

At seventeen, Peter was accepted into Blackpool’s fine art academy, where he was schooled in the study of the human form and the discipline of drawing that is the foundation of many of his creations today. Peter finished out his artistic education at Bath Academy of Art where he extended his skill in graphical art.

The main themes of Nixon’s paintings are primarily idealized and stylized figures in states of joy, exhilaration and ecstasy. They share moments of tranquil elation, feeling lighter than air, reveling in being just pure spirits – in love, dancing, listening to music in celebration of their most vivid collective memories. That time that we are truly alive, ecstatic, positive and living in the moment. 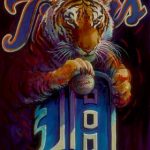 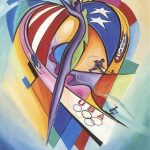