Talk to most artists and they’ll tell you they’ve learned from and been inspired by the artwork of others.

Before Marcus Glenn became a Park West artist, he would stop by the Southfield gallery regularly to check out new work and special exhibits. He says he liked to get “right up and close to the art” to study other artists’ techniques and their use of various media.

Nell Drees heard Marcus speak in 2011 about his road to becoming an artist at a Park West event and it stuck with her. “I thought his story was just awesome,” she said, recounting how he told of cutting out fabric like paper dolls to clothe the figures in his work. “I believed the children in our district could relate to that.”

When planning this year’s annual district arts festival in Edenton, N.C., Nell contacted Park West and inquired if Marcus Glenn’s story could be used as inspiration for students participating. She thought it would be meaningful for them to learn about a living and working artist.

The fact Marcus was chosen as the official artist for this year’s Grammys brought a bonus level of interest for some students. Since recognition in a high school art contest was one of the sparks that led Marcus to realize pursuing art as a career may actually be a possibility, sharing his story to inspire students is fitting.

In support of the groups efforts to advance the arts, Park West Gallery donated to the women’s club a piece of Marcus’ artwork “Blowing in the Wind Red,” which he created in 2006. Above, students pose with the painting and their own works of art.

The work was displayed at the Feb. 8 festival and will also be shown at the state competition. In April, it will be the winning prize in a raffle to benefit the Edenton Woman’s Club Arts Festival, NC Woman’s Club District #9, and the Chowan Arts Council. The daylong district arts festival – organized and sponsored by the Edenton Woman’s Club – invites students in all grades from local schools to participate in events in performing arts, visual arts, crafts, sculpture and needlework. There are small monetary prizes and scholarships involved, and winning entries went on to the state competition. For fun and community spirit, women in the club are welcome to display work at the event, too.

“The students are very talented, and it is so rewarding to see their work displayed and their pride show with the recognition they receive,” said Nell. All the first-place winners go on to compete in the State Arts Festival. “Maybe we have an upcoming Marcus Glenn in Eastern Carolina!” she said.

Students in the schools learned about Marcus through his biography and through this Park West video highlighting his studio.

“Edenton Woman’s Club thanks Park West for the inspiration and the beautiful Marcus Glenn artwork donated to inspire students and help us promote art in Eastern Carolina,” Nell said.

Park West Gallery extends congratulations to all those who participated and is happy to share stories about how its artists inspire youth. 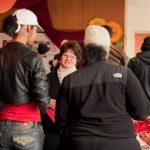 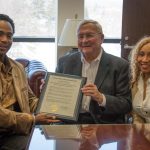