The Park West Gallery Art Auction Team recently partnered up with the entire crew of the Celebrity Solstice to raise money for the Breast Cancer Research Foundation during its October fundraising drive.

The Park West Gallery Team aboard Celebrity’s flagship conducted an auction for more than 800 members of the crew who attended the late night event.

Fine art donated by Park West Gallery was auctioned off in addition to various donations from all around the ship including; a guest cabin for a voyage, an engine room tour, a bridge tour, shore excursions in the ships ports of call and dozens more.

One of the most coveted items available for bid was dinner with a member of the Ship’s Management and Senior Staff. Crew members bid hundreds of dollars for the chance to dine with some of the “Stars” of the Solstice.

The Park West Gallery Team also auctioned off a piece of blown glass artwork from the Corning Museum of Glass to raise additional funds for the charity. The two auctions, along with various other fundraising events held for the crew, netted over $20,000 for the Breast Cancer Research Foundation.

Recently, Celebrity Cruise Lines selected two members of the Celebrity Solstice’s crew to be the Godmothers of the line’s new ship, the Celebrity Reflection. The two crewmembers are both women whose lives have been impacted by breast cancer. Both of the newly named Godmothers were present for the fundraising activities aboard the Solstice, making the event even more special.

“The compassion shown by the Solstice’s crew is truly remarkable,” said fundraiser organizer and Park West Auctioneer John Block. “It was very inspiring and of course it was an even more special event because Jo and Megan were present to witness the effort.” 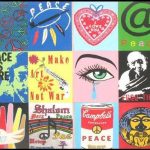