In Part 1 of Park West Gallery Director Morris Shapiro’s interview with renowned artist Leslie Lew, the artist discussed her artwork and thriving career. In Part 2 Lew discussed her background. Following is Part 3 in which she discusses the early years of her artistic career beginning with her time in Chicago where she attended the Art Institute of Chicago…

Morris Shapiro: When you were in Chicago, you became affiliated with a wonderful movement called the “Hairy Who” movement. It’s not a very well-known movement, but I think it was very influential because a lot of the imagery seemed to emerge from culture…from comic books and pulp fiction. You studied the important artists of that period, and you knew some of the important artists from that period.

Leslie Lew: Ray Yoshida was my advisor for the whole time, and Ray was one of the big names in the Hairy Who. He just passed away about six months ago.

MS: And then you moved to New York and were part of the famous East Village movement.

LL: Yes. My being influenced by the Hairy Who in Chicago was a part of that. The Hairy Who was around about the same time as the Pop Art movement…they were just a different offshoot; a little bit wilder, actually. They really would have fit right in with the East Village artists because they were really funky. I was so influenced by Roger Brown and Jim Nutt and the others, that when I went from Chicago to New York, my work fit in perfectly with the East Village movement. It was really cool.

It’s kind of an interesting story, too, the way I got to New York. I was still in graduate school at the Art Institute of Chicago, and I decided I wanted to go to New York. There were a couple of different programs. I applied to the Whitney, but that year they didn’t accept any painters…they decided that year to just accept video artists. But, it turned out there was an offshoot art program called “Semester in New York City” that was funded by the New York Arts Council and affiliated with the Whitney. So, they invited the artists that had applied to the painting program that year.

It turned out that I got the rejection letter from the Whitney saying they were doing only video, and the next day I got the letter inviting me to the “Semester in New York” program. So I went. They had the greatest studios…they had an old telephone factory right on the West Side highway and the entire building was studios. And they had major artists come every Friday and critique our work. It turned out to be a great experience.

MS: And also at this time you were a single mother with a young child?

LL: I wasn’t a mother yet. When I first got to New York and getting into East Village movement and showing, and I met another painter named Jeffery Lew and we got married. He was a popular artist in the 70s and very good friends with Rob Rauschenberg.

For a few years it was really fun, but it became difficult when I started getting some notoriety with the East Village, because his day had kind of passed. I was trying to be cool about it, but it was really hard. People would come up to him and say “how does it feel to be Mr. Leslie Lew?” By that time I had given birth to my son, and he just couldn’t handle it, so I became a single mom on my own.

Stay tuned to the Park West Gallery blog for Part 4 of this fascinating interview with Leslie Lew, and be sure to read Part 1 and Part 2 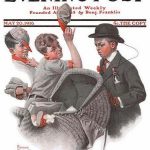 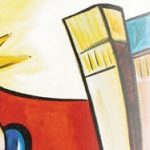