Miró in His Garden at the Maeght Foundation

SAINT-PAUL, FRANCE — Through November 8, 2009, Miró en Son Jardin (Miró in His Garden) will be on display at the Maeght Foundation in Saint-Paul-de-Vence. The exhibit — which includes 250 works by Joan Miró, ranging from major paintings and sculptures to several never-seen-by-the-public pieces — occupies the entire museum and gardens, illustrating the profound relationship between the Maeght family and this artist.

Miró, the revered giant of 20th century art, was close friends with the Maeght family, and was deeply involved in the creation of the Maeght Foundation. The space was formerly a holiday home, a haven for him to meet people and to think—and above all, his open air studio. This exhibit offers a unique opportunity to meet Miró in His Garden and to discover the secret behind his creations.

Joan Miró and Aimé Maeght met when Miró joined Braque in Varengeville. In 1948, after the war, Miró went to Paris and Maeght looked after him while he was working on a series of lithographs.

As a token of his esteem, affection, and gratitude to the Maeght family and the Foundation at St. Paul, Miró made an exceptional donation of his works, including sculptures, maquettes, ceramics, and paintings both on canvas and on paper. In 1979, an exhibition directed by Miró enabled him at last to present his works and research in the way he wished.

In the 1960’s, Joan Miró was given the opportunity to create a gigantic sculpture in the gardens of the Marguerite and Aimé Maeght Foundation. This was the Labyrinth. For the first time, Miró’s sculpture was deliberately put together with architecture and nature, ever his source of inspiration. The artist thus created a sculpture garden especially for the Maeght Foundation, consisting of enormous sculptures and ceramic works, a labyrinth inhabited by creations of the artist’s dream world, reminding us that he was far more than a painter.

In 1964, at the opening of the Maeght Foundation, the public discovered stone walls weaving amongst the ceramics and sculptures. The artist painted a white line along the walls to guide the visitor through the sculpture garden. Here, the genius from Catalonia explored difference materials: the Grand Arche is made of concrete, using a pneumatic drill. L’Oiseau lunaire and L’Oiseau solaire are made of Carrara marble. La Fourche, the symbol of a peasant’s raised fist during the Spanish Civil War, is made from iron and bronze. The ceramic Lézard climbs up the patio walls while gargoyles above the ponds spew water into the depths Miró decorated. 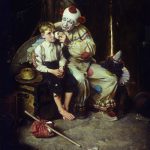 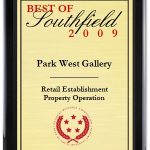