Making Tough Decisions About Where To Hang New Artwork

Do you remember the couple we featured on our Facebook page and blog recently? Jeff and Lorelei Bogle cruised with Royal Caribbean in January and despite never having bought fine art before, ended that weeklong Caribbean holiday with not one, not two, but four vibrant Itzchak Tarkay paintings! When we saw Jeff posting photos of their Tarkays arriving, reframed, and packaged perfectly, we reached out to see how and where the couple planned on displaying their new art collection in their East Village apartment. Turns out, tough choices had to be made to fit everything they bought on the walls!

Jeff notes that the conversations about where to hang these paintings began during the cruise, with the couple disagreeing about potential placement.

“Lorelei’s entire life is built around books,” Jeff said. “From escaping into books as a child to a 20-year career at Barnes & Noble, culminating with a multi-store manager role in NYC, books are quite literally the biggest part of her story.”

In the couple’s apartment hang a handful of massive canvas artworks depicting book covers — V, The Iliad, To Kill a Mockingbird, This Side of Paradise, Under the Volcano, and more, from Lorelei’s Barnes & Noble stores. While overjoyed about how their four Tarkay hand-embellished paintings will soon come to illuminate the apartment’s two bedrooms and living room, she is also clinging tightly to the book art she has cherished for many years. But something has to give when you add four new works of art to your collection!

In their second bedroom hangs a world map tapestry that Jeff’s youngest daughter loves, some of his kid’s own paintings, and on one wall, a wealth of art and soccer memorabilia from his many trips to England. Neither Lorelei nor Jeff are eager to put any of their Tarkay paintings in this spare bedroom. This back room is Jeff’s office and the designated guest room for either of his two daughters when they come to the city. It’s not the perfect place for fine art. It would be like putting a basket over a shining light!

This leaves the bedroom and the living room. Lorelei briefly suggested swapping Jeff’s framed map of football clubs in Great Britain that hangs in the kitchen directly next to the sink where Jeff spends a fair bit of time as the head cook and hand-dishwasher of the apartment. There’s simply no way he was willing to give up that precious space.

“Number one, it is kind of silly to hang fine art near a sink,” Jeff remarked, “And two, it’s my favorite thing to look at while doing dishes – scanning all the cities and football club logos, remembering my trips to see matches and the century-old stadiums.”

The decision was finally made to remove four book-art canvases—two each from the bedroom and living room. Above the dark wood headboard in the bedroom will hang Itzchak Tarkay’s “Autumn in the Country,” while the To Kill A Mocking Bird canvas—with its thematically appropriate tree image and deep red and black design—moves left to hang above Lorelei’s chest of drawers.

In the living room will go “Colorful Pose,” the bright, bold, and vibrant Tarkay hand-embellished serigraph on canvas that started the couple on this art collecting journey. It will hang beside “Cozy Bench for Two,” with its glass protection warding off curious kitty cat claws, beneath “Joanna,” the 10×10 masterpiece Jeff first fell in love with after reading this story about Itzchak Tarkay.

Always wanting his wife to be happy, Jeff suggested placing one of the book-art canvases in the guest bedroom and one in the entryway to ensure that these important pieces of Lorelei’s life stay alive in our home. In the end, the best of both worlds was achieved. Books will still play a supporting role in their decor, but the four Tarkay artworks will be front and center, capturing the couple’s attention daily and making visitors’ jaws drop upon entering their home.

What are the difficult decisions you’ve had to make to hang your Park West art? Show us on social media by sharing your photos using #parkwestgallery!

To add works of art by Itzchak Tarkay to your own collection, register for our exciting online auctions or contact our gallery consultants at (800) 521-9654 ext. 4 or sales@parkwestgallery.com 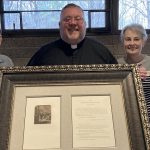 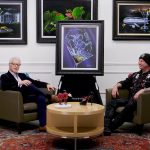