David “Lebo” Le Batard is known for including animals like cats and dogs in his works, but he is just as passionate about helping the real thing.

During Art Basel Miami, Lebo partnered with Lululemon as well as Hoffman’s Chocolates of Florida to raise funds and awareness for Paws 4 You Rescue, a non-profit, no-kill animal shelter in Miami. The shelter aims to save dogs from euthanasia at Miami-Dade Animal Services, as more than 27,000 unwanted pets end up there on an annual basis.

“I feel that dogs truly are guardian angels and know Paws 4 You does great work in helping rescue and preserve our canine friends locally,” Lebo says.

With Lululemon, Lebo was commissioned to create a design that wrapped around the store’s windows on Lincoln Road. He also featured some of his artwork in the windows, which helped bring attention to a dog adoption day. The artwork was inspired by an element from Egyptian hieroglyphics known as the Ba bird, the four elements (earth, wind, fire and water) and themes of duality. Lebo has worked with Lululemon in the past, creating shirt designs and a painting that incorporates the brand’s slogan. He says the latest collaboration was a further creative evolution of the partnership.

Lebo also partnered with Hoffman’s Chocolates for a sweet fundraiser. He designed a candy wrapper for a milk chocolate mint Oreo bar, with 50 percent of the proceeds benefiting Paws 4 You Rescue. Lebo says the partnership came about through knowing the owners of Hoffman’s Chocolates and liking how they run their business.

“It was a good fit all around, which is generally part of what I like to use to see if a collaboration makes sense,” Lebo says.

The artwork on the wrapper, called “The Bliss of Balance,” is about humans searching for truth and wisdom by investigating the natural world. A poster of the artwork is included with every bar purchased. Lebo says he enjoys working with groups such as Paws 4 You Rescue due to the writings of Plato, who lays out elements of how a good citizen should act. He says the question is “of what service am I to the community around me?”

“Working with groups that I believe in like Paws 4 You allows me to exercise that part of my moral compass,” Lebo says. 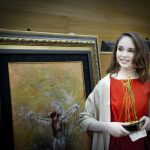 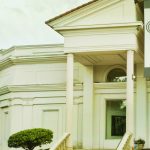