The History of Picasso Ceramics: How Picasso Changed Pottery Forever

Between the years of 1946 and 1973, Pablo Picasso created a breathtaking collection of original ceramic works.

Over the past fifty years, Park West Museum has developed one of the largest collections of Picasso ceramics in the world. Our current collection includes 98 individual works, covering a broad range of Picasso’s techniques and subjects.

But how did Picasso—best known for his paintings—first become interested in ceramics? And how does his pottery fit into his larger body of work? Join us for this brief history of Picasso ceramics, the results of a truly remarkable period in the life of one of the 20th-century’s greatest artists.

After World War II my father explored the full potential of working in pottery, including the different techniques of painting with slips and glazes. Over a period of some twenty years, he modeled, shaped, designed, decorated, engraved and carved over 3,500 fired clay objects. The great invention and originality of this large body of work has established his importance in the development of 20th-century art pottery.

—Claude Picasso, From “Picasso: Painter and Sculptor in Clay,” Royal Academy of Arts, 1998. 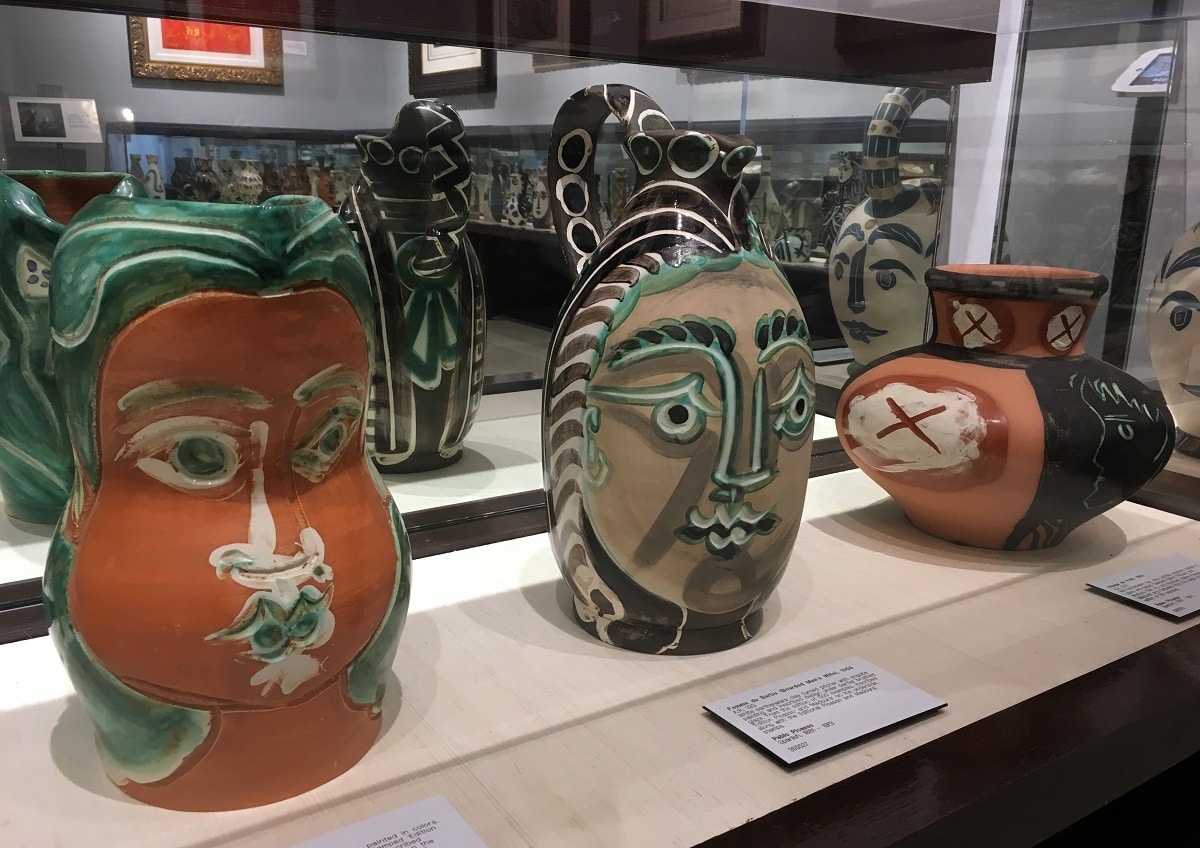 Pablo Picasso is known for many things, but perhaps his greatest contribution to modern culture was his unwavering eagerness to experiment.

Before his sixtieth birthday, Picasso had already carved out an indelible place for himself in art history. He had co-founded Cubism, evolved through his various “periods,” painted “Guernica,” engraved and etched his famous “Vollard Suite,” and been the subject of a major Museum of Modern Art retrospective, among other extraordinary and historical milestones.

Most artists over 60—with that many accomplishments behind them—would not still be searching for new artistic horizons to explore, but Picasso was no ordinary artist.

He was always searching, always experimenting with new ways to express himself artistically. Following the end of the Second World War, a fateful trip to the South of France inspired a whole new chapter in his career. 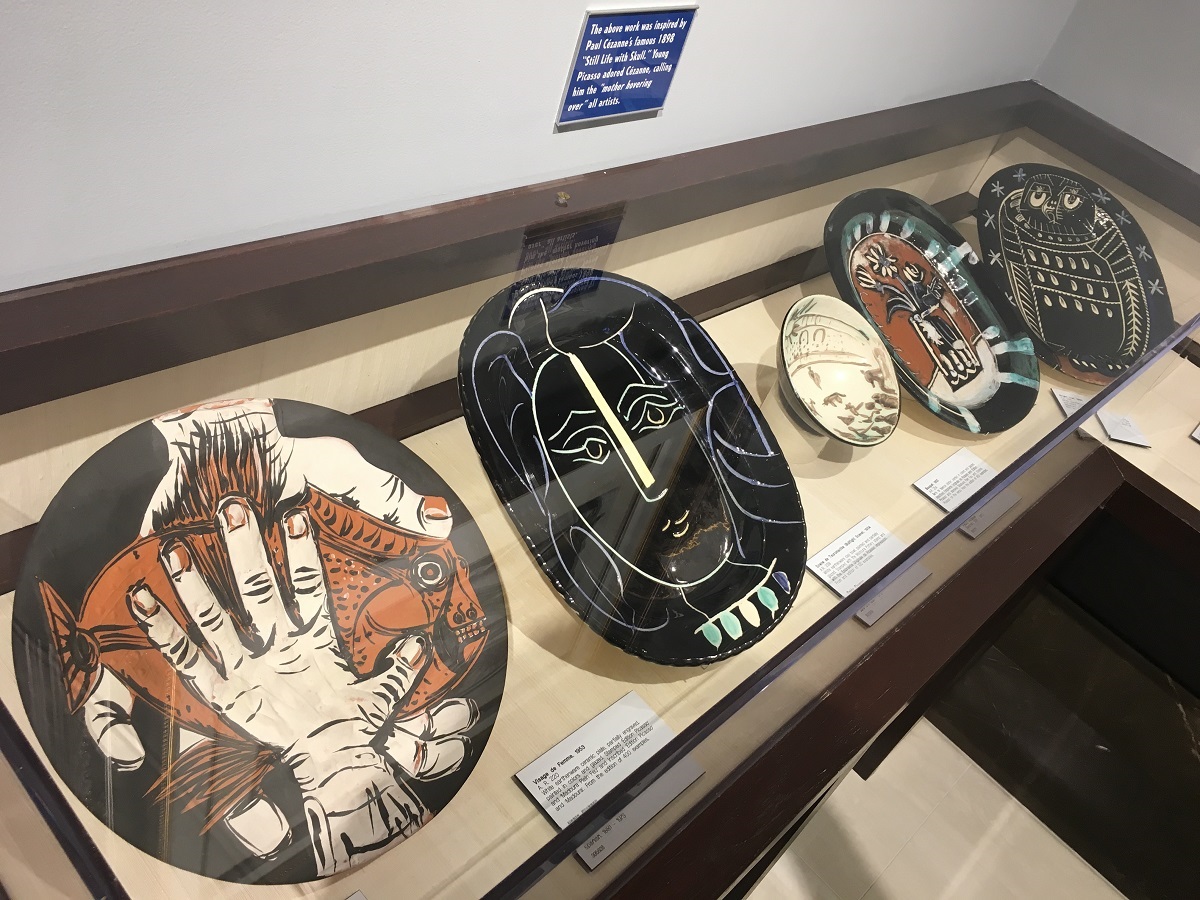 In July 1946, Picasso visited Vallauris, France for the first time in the company of Françoise Gilot (mother of Claude). The small coastal town was known for its pottery, and Picasso quickly became enamored with the ceramics being produced by the Atelier Madoura, owned by Suzanne and Georges Ramié.

Picasso had experimented with pottery in the past—firing a few vases with sculptors like Paco Durrio and Jean van Dongen—but witnessing the work at Madoura lit a fire in the artist.

He partnered with the Ramiés to begin producing his own ceramics, ushering in one of the most prolific periods of his career.

But why was Picasso, an artist who had explored other artistic mediums before, so interested in ceramics?

There were several reasons. One was that he was intrigued at how quickly and inexpensively he could create these new ceramic works. In an era when only the wealthy could afford his paintings and sculptures, Picasso welcomed the notion that his pottery and ceramics could potentially be owned by everyday people in the post-war world.

Picasso also loved the idea of his ceramic works being both aesthetically pleasing and functional—he frequently gifted his pots, plates, pitchers, and bowls to friends and family members. 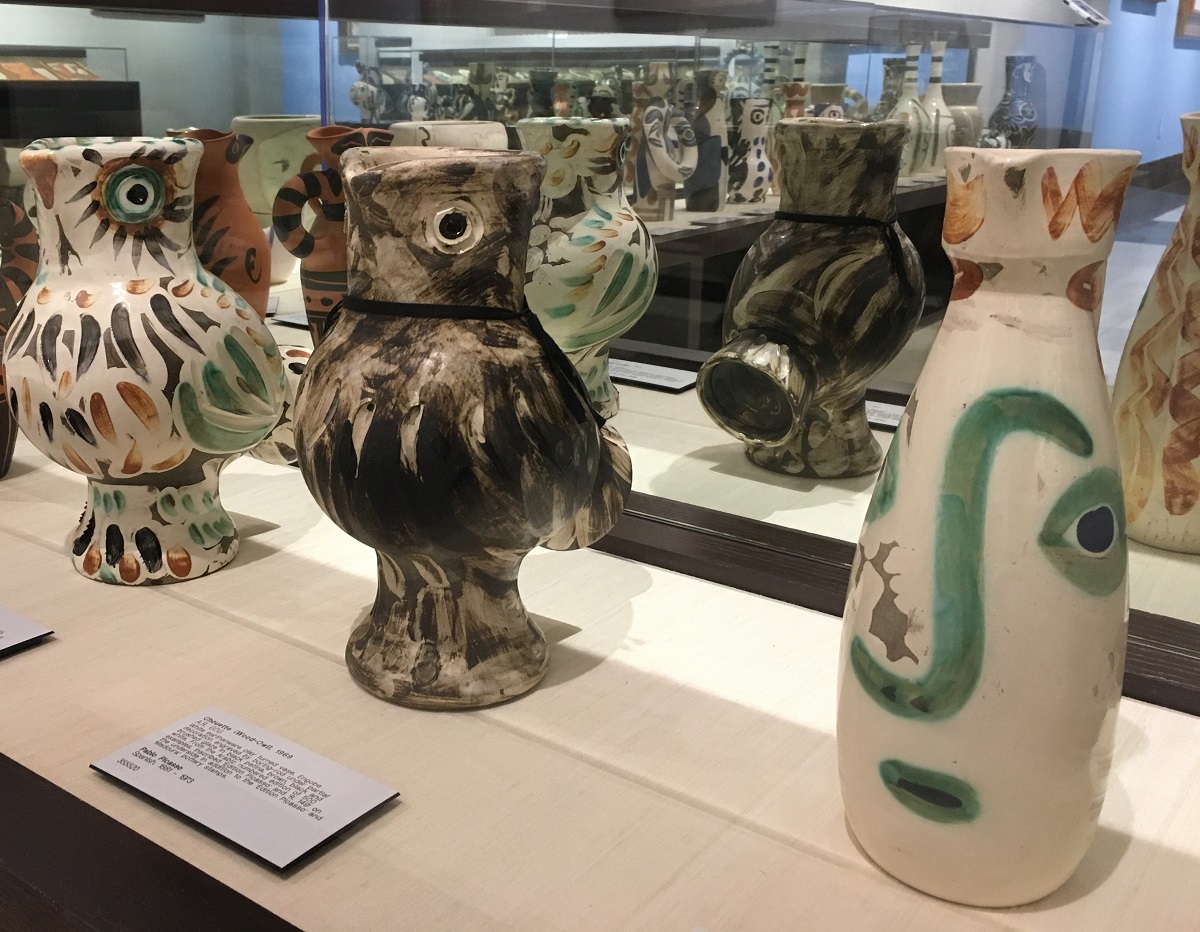 More than anything, Picasso was eager to test the creative potential of this new medium.

“My father never considered himself a potter,” said Claude Picasso. “But approached the medium of clay as he would any other in order to find out what the materials and techniques of the potter’s studio could offer him and what he could discover by probing their inherent qualities or possibilities.”

One of the owners of the Atelier Madoura, Georges Ramié, expressed similar sentiments about Picasso’s fierce curiosity.

Whenever Picasso decides to tackle new materials, in order to satisfy his insatiable desire to discover the particular features of each medium, he feels that he is liberated from any kind of gravity that might impede his flight. He seems to develop a new acuteness in his pursuit of hazardous encounters with noxious interferences that tease him in the shadows. And this immediately fills him with an incredible ingenuity of a practical order.

As Claude Picasso pointed out, his father was not a trained potter, so, more often than not, Picasso learned by doing. He threw himself into his work, learning the exacting artistry of ceramics often by trial and error.

Picasso set up a workspace for himself at an atelier down the road from Madoura, where he would sketch out his designs for new ceramic works. When he would arrive at the pottery studio, Picasso would immerse himself in the difficulties of bringing his concepts to life.

Sometimes he would encounter structural problems—such as how to best incorporate three-dimensional elements on the flat surfaces of his plates. Other times, he faced with issues regarding the decoration of his ceramics. 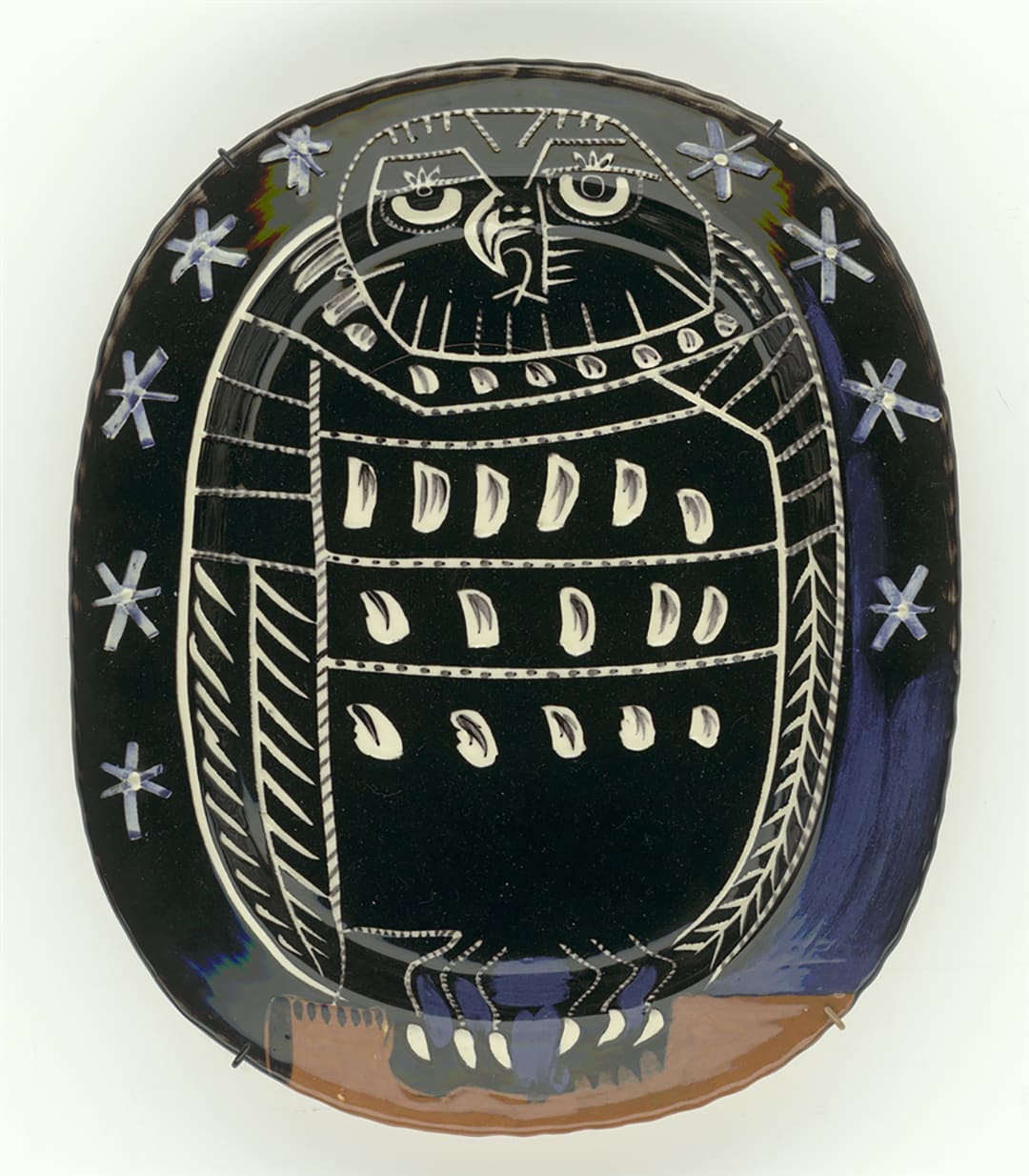 Various glazes and oxides that Picasso would use to paint the surface of his pottery would appear dull or almost transparent while being applied, only to have their colors vividly—and sometimes unpredictably—come to life during the firing process in the kiln.

Picasso could only anticipate how such colors would appear on his ceramic work through long, hard experience. 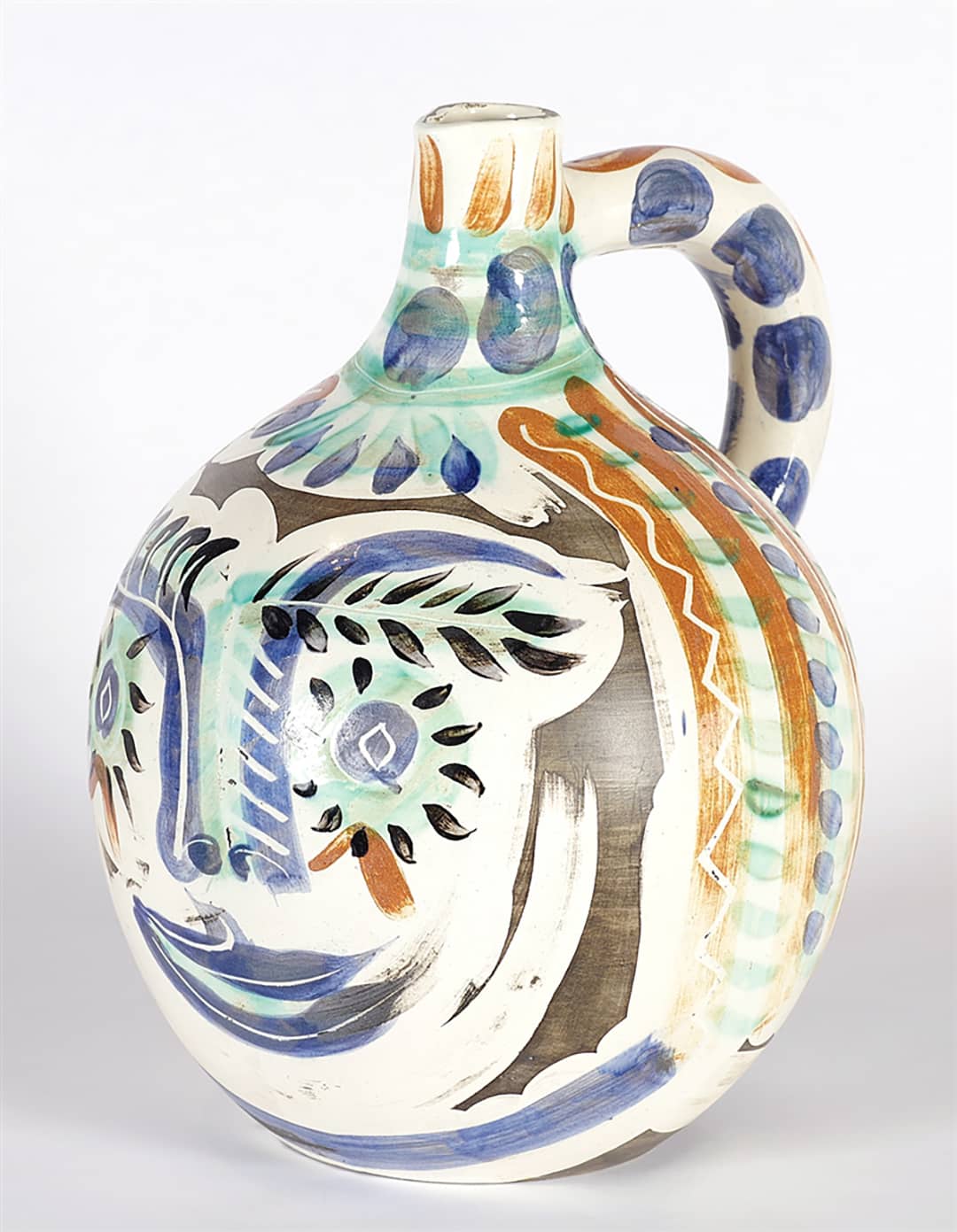 Each kind of matter influences and determines the others, either separately or together, under very specific conditions. The result of their interaction tends to be constantly altered by reactions of an elementary kind that may produce superimposed modifications, destroying each other, strengthening each other, dividing, repelling or multiplying each other, all these phenomena being determined by the temperature, the humidity and duration, and sometimes even by the influence of very old residues.

… As one can see, the field is enormous. Like every other sphere of human knowledge, it has an unlimited area for exploration. (Chartwell, 1974)

Fortunately, Picasso was up for the challenge, and you can see the evolution of his talent with ceramics throughout the Park West Museum collection. 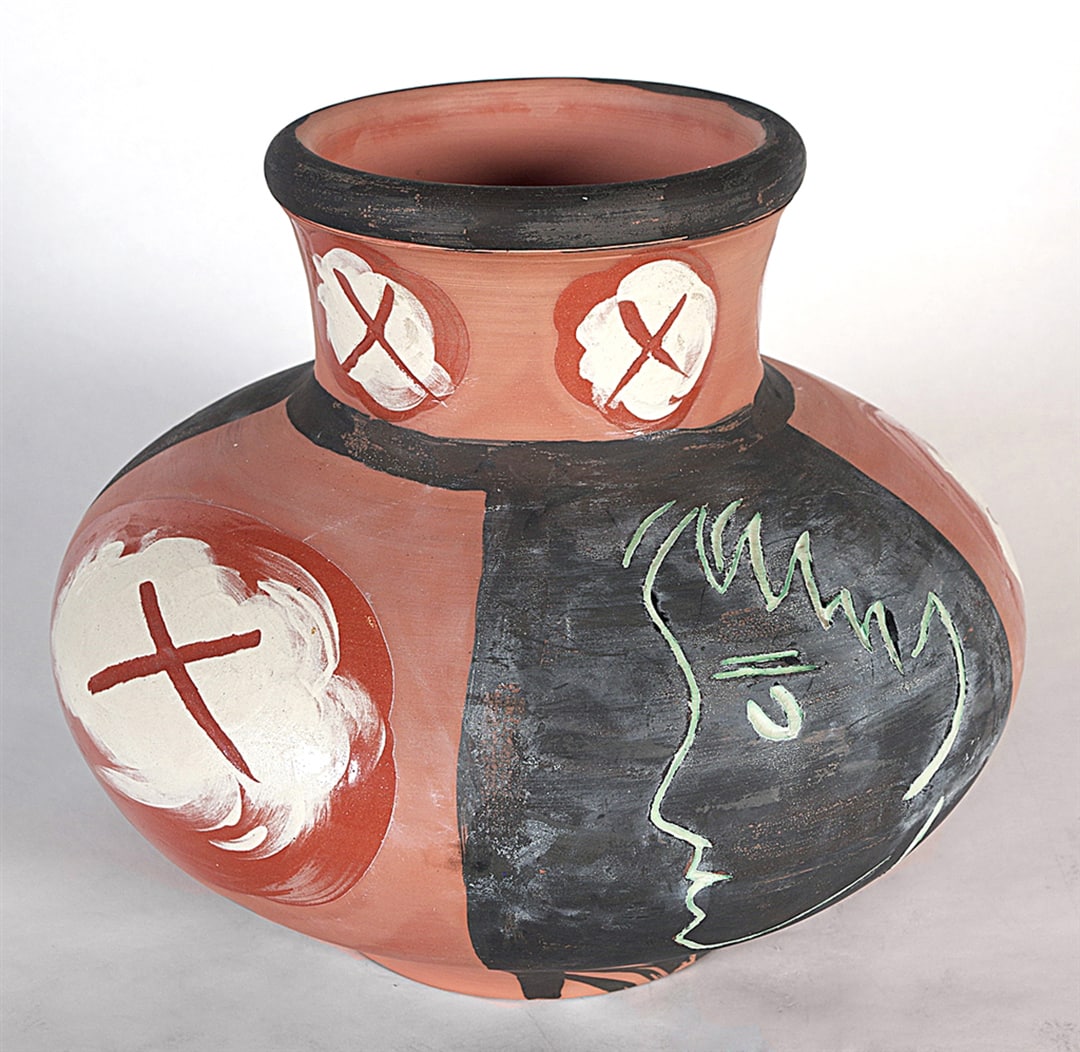 The iconography of bullfighting can be seen frequently seen across Picasso’s ceramics—bulls, matadors, banderilleros, and the bull-ring. He often evokes the shape of the bullfighting arena in his longer, elliptical plates, in which the viewer takes on the role of an overhead spectator as the bulls and matadors are centered in the middle. 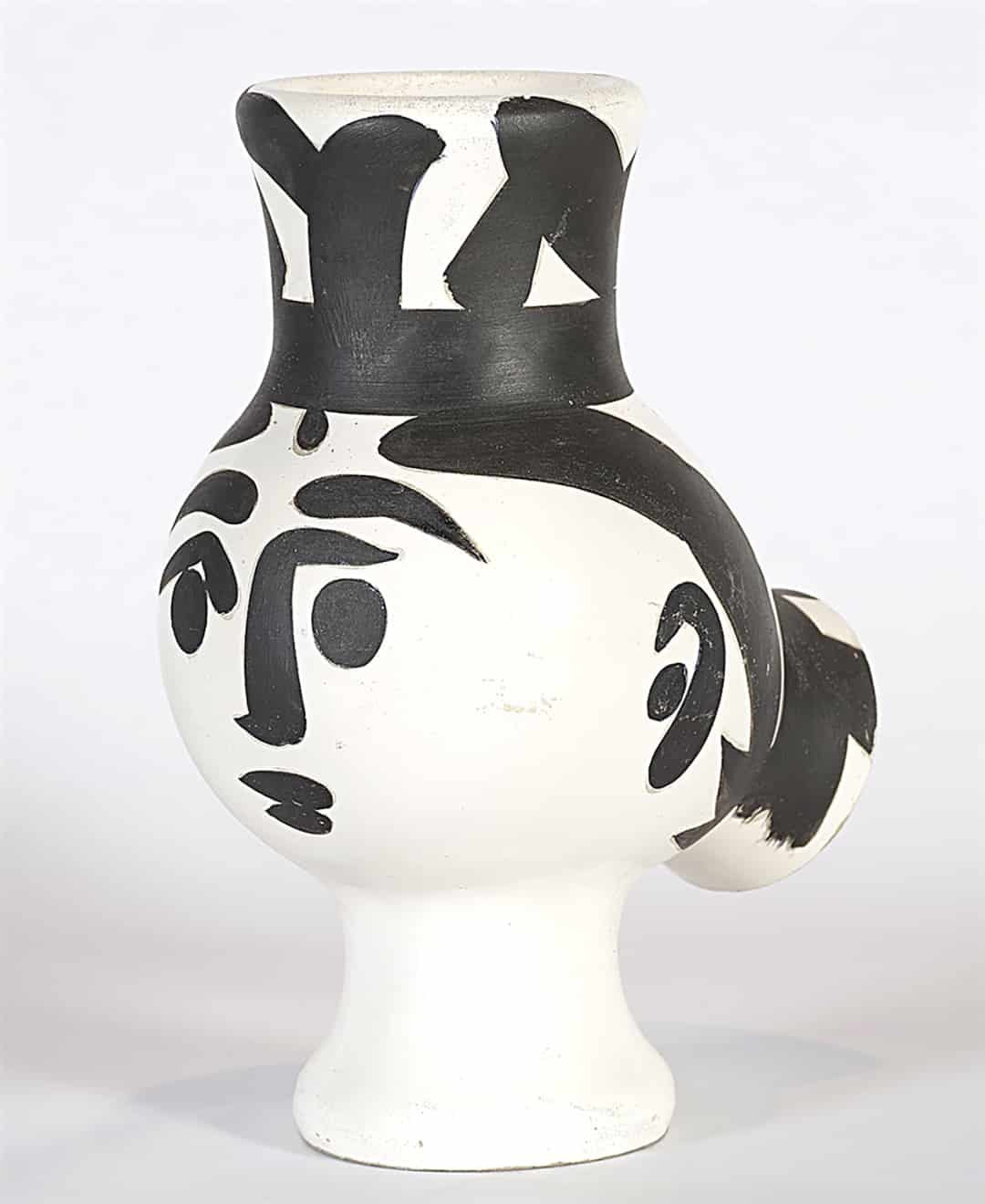 Animals like bulls are common in Picasso’s clay works. Ramié noted that Picasso excels at bringing to life “anthropomorphic or zoomorphic forms.” In addition to the powerful bulls, we see a wide selection of birds—pigeons, doves, and birds of prey. Various vases are sculpted to resemble bird faces, and pitchers are transformed into watchful owls.

Picasso’s playfulness shines through on these avian works, in particular, with his more sculpted designs bringing a wealth of personality to his pitchers and vases.

Picasso even brings to life more exaggerated, fantastical bird forms, which play into his persisting interest in mythology. His ceramics not only feature goats, but also fauns and satyrs—their figures evoking imagery of Bacchanals and mischievous tricksters. 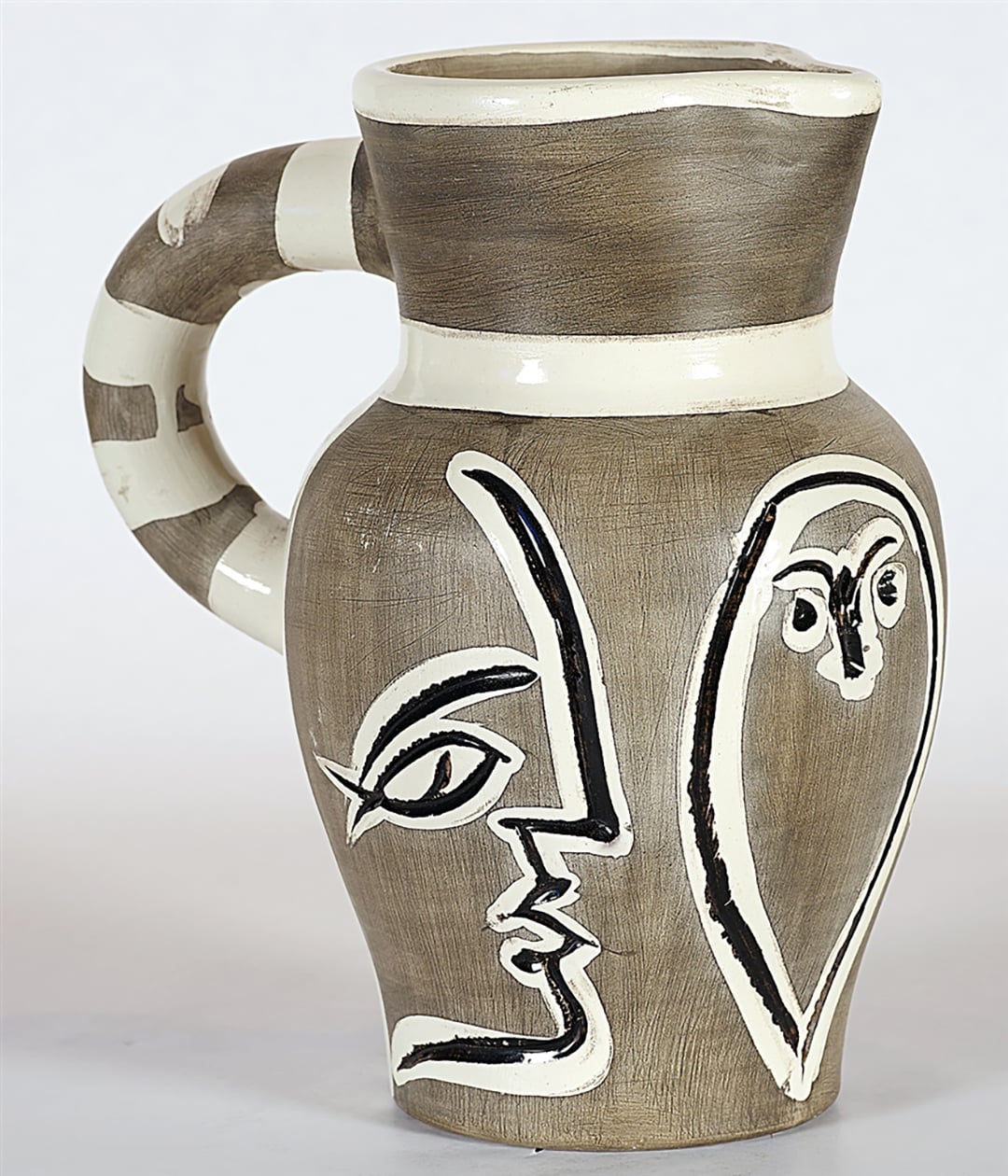 The mythical half-man, half-bull minotaur is another of the artist’s repeated motifs. Picasso once said, “If all the ways I have been along were marked on a map and joined up with a line, it might represent a minotaur.” 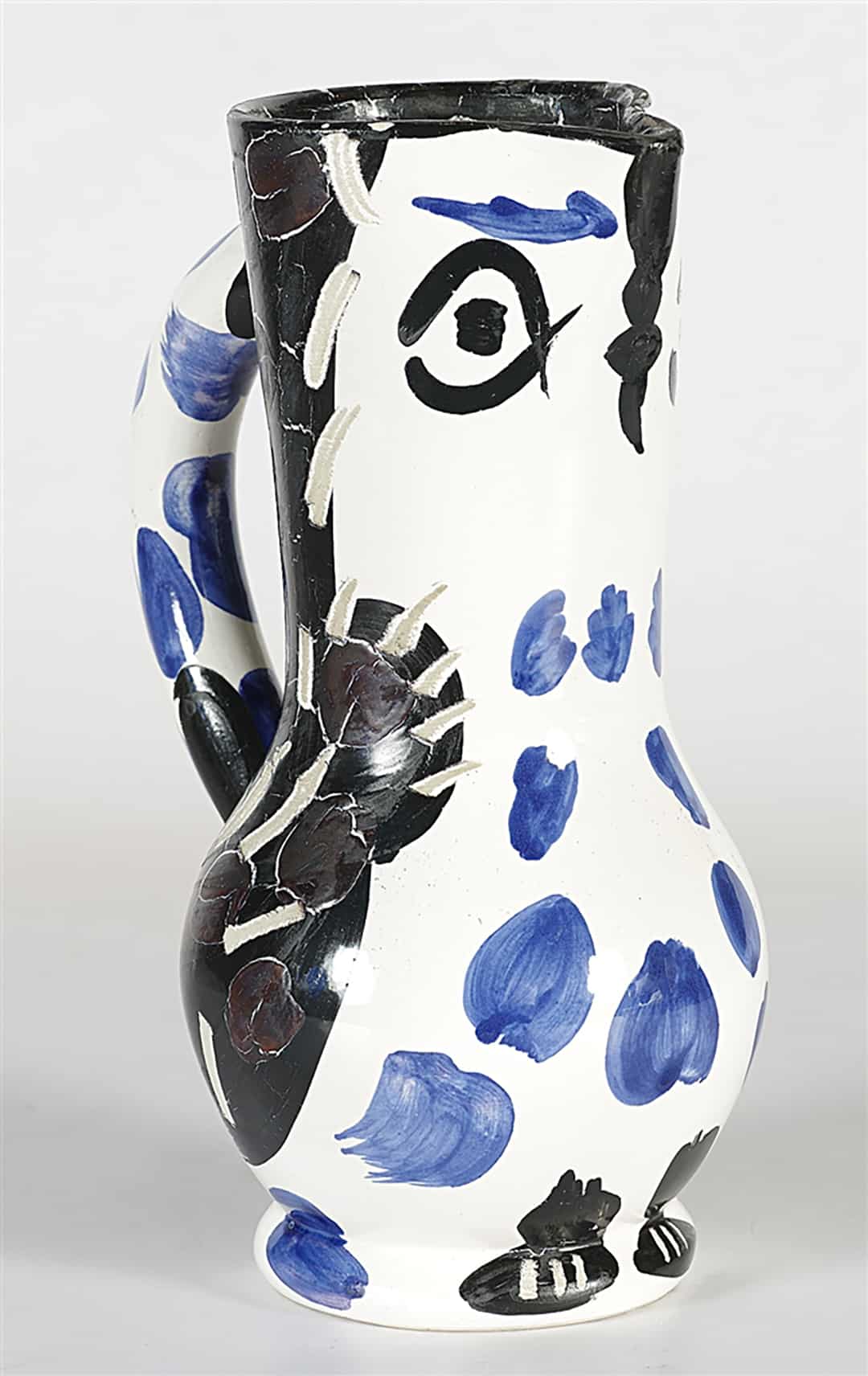 The face of a feminine muse makes multiple appearances across Picasso’s ceramics as well, sometimes carved onto a plate or surrounding a rounded vase.

This is often cited as the face of Jacqueline Roque, Picasso’s second wife, whom he met at Madoura in 1953. The couple would marry in Vallauris in 1961 and would remain together until Picasso’s death in 1973.

The designs on his plate “Jacqueline au Chevalet” (Jacqueline at the Easel; 1956) capture Roque standing in the artist’s workplace, showing how integral Picasso regarded her to his work at the time. 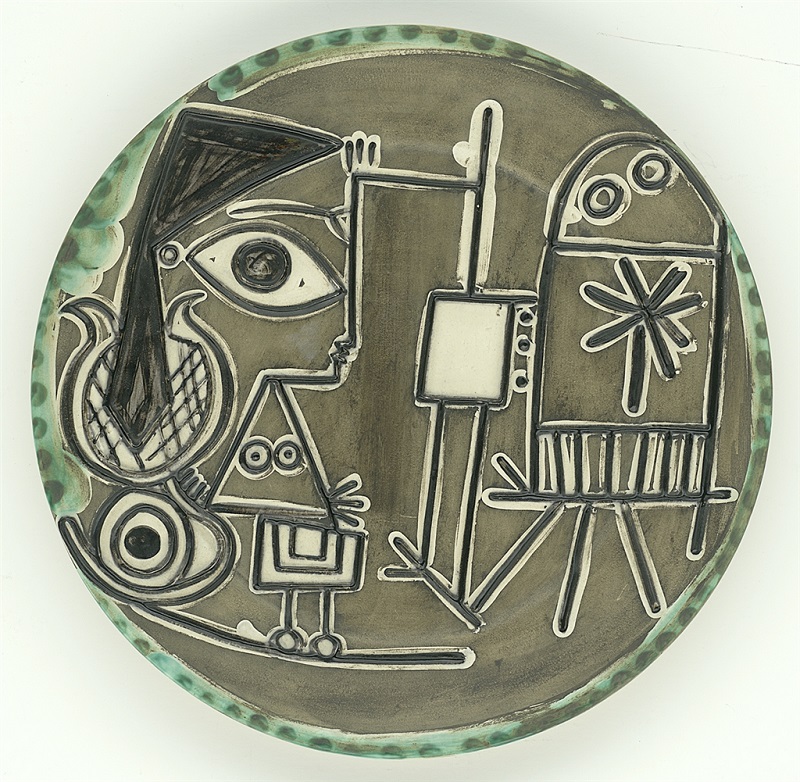 One of the things that attracted Picasso to ceramics was the medium’s ability to create multiple editions of his designs, much like an etching or a lithograph. Thus, scholars largely divide his ceramic work into two categories—original ceramic prints and the editions according to originals. 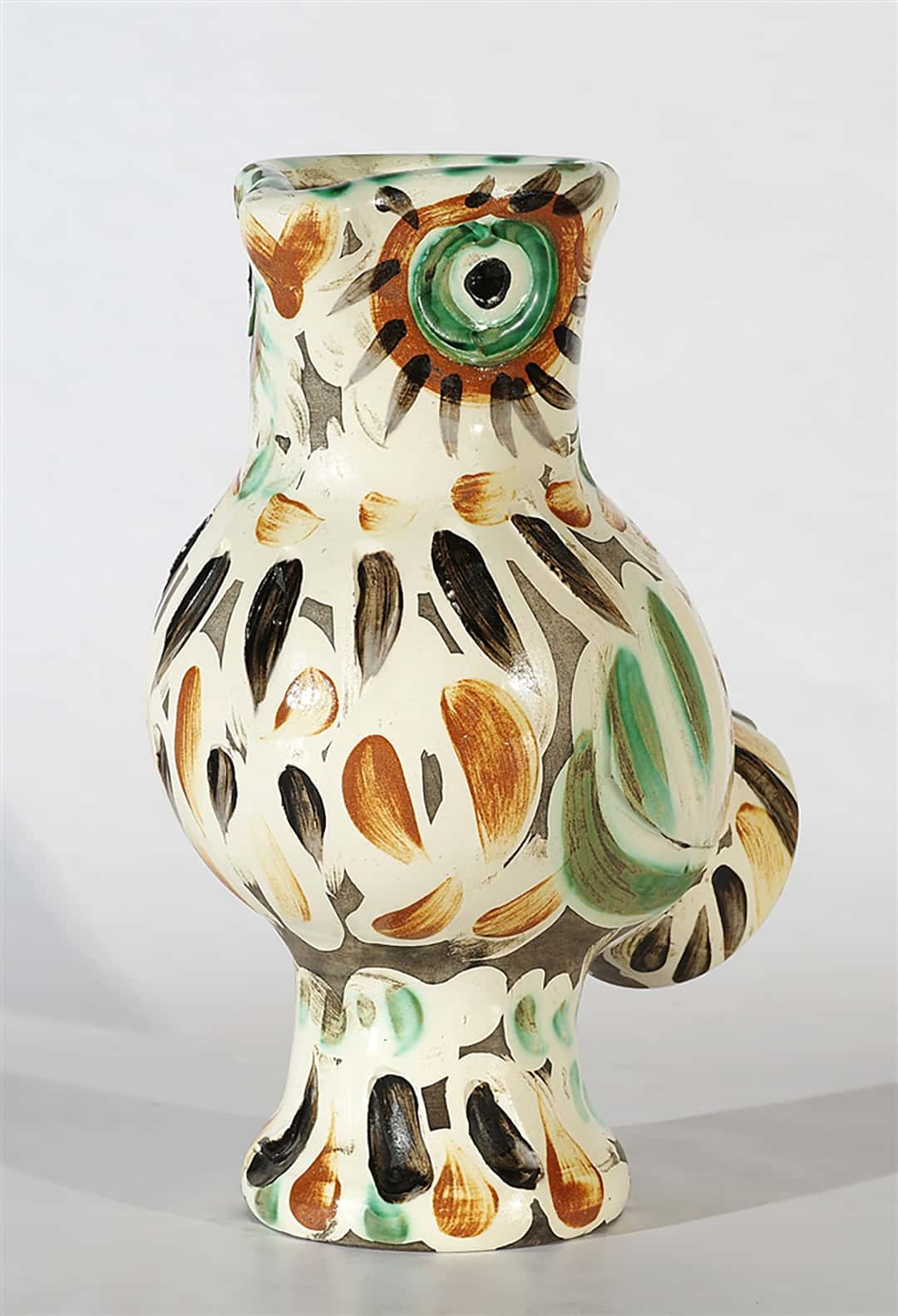 In discussing the term “original,” Georges Ramié notes that:

This publically and universally accepted term has been permitted to apply similarly to all graphic work in which the generating medium (stone, wood, copper, plaster) has indeed been delivered by the hand of the creator, but the definitive support is obtained by the intervention of a craftsman working under the artist’s personal supervision, permitting editions of a limited and numbered amount of copies and thus authenticating and warranting this original series. (Chartwell, 1974)

These ceramic editions, which vary in size from 1 to 500, offer fascinating insights into the artistic evolution of one of the 20th century’s greatest artists. 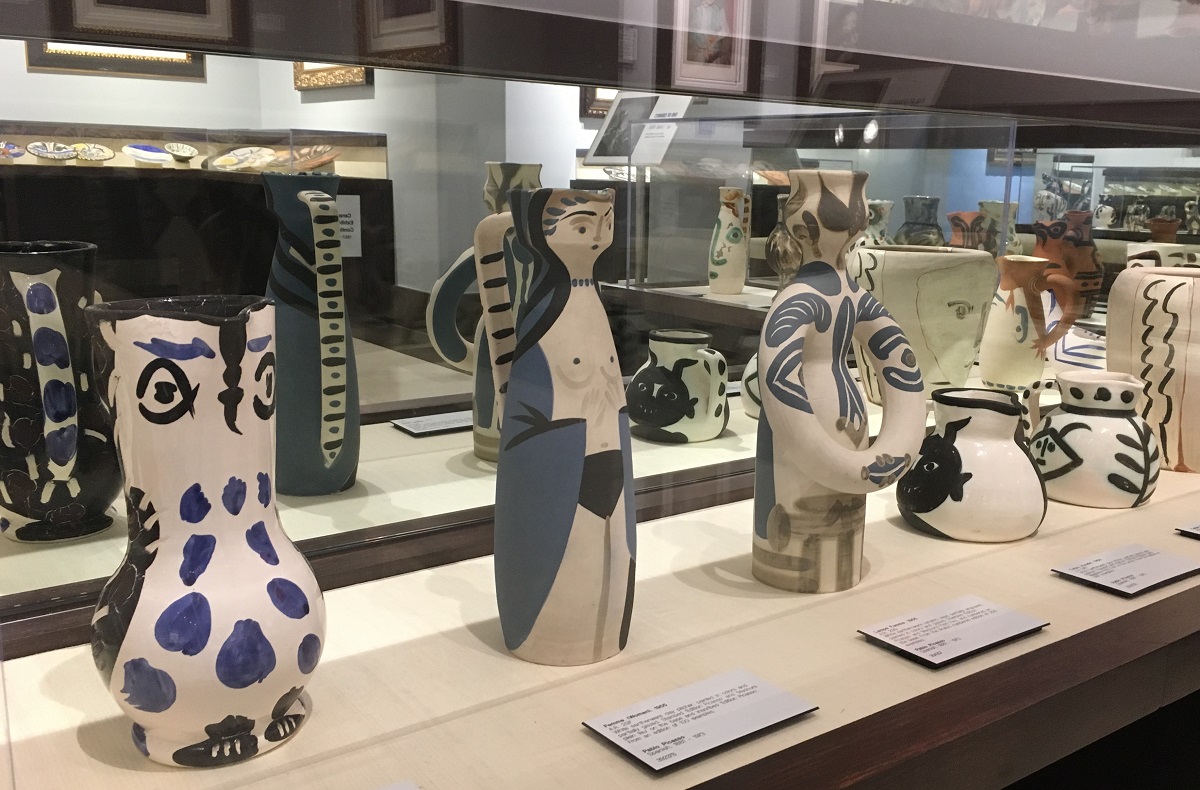 According to Claude Picasso, his father’s involvement with his ceramics was “so profound and personal… that, until recently, it went unrecognized as a significant part of his oeuvre.”

Today, art lovers truly appreciate the significance of this phase of Picasso’s career. The ceramics he produced while working at Madoura have been acquired by some of the most notable collectors of modern art and now appear in museums all over the world.

The Park West Museum, just outside of Detroit, has extensive galleries devoted to the works of Picasso, including one of the largest collections of Picasso ceramics on display anywhere in the world.

To collect the artwork of Picasso, register for our exciting online auctions or contact our gallery consultants at (800) 521-9654 ext. 4 during business hours or at sales@parkwestgallery.com. 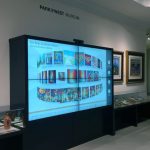 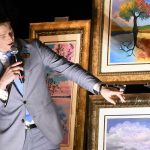