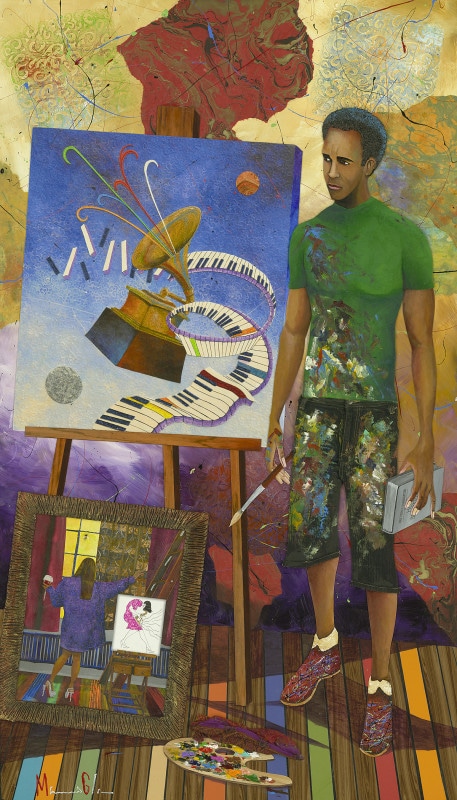 “Accurate Knowledge is Better than Imagination” (2015) by Marcus Glenn. The painting is one of Glenn’s largest yet at 7-feet by 4-feet.

To celebrate his first show in his hometown in nearly 20 years, artist Marcus Glenn challenged himself by creating one of his largest works of art to date.

In honor of Park West Gallery’s “Detroit’s Finest” three-part exhibition series featuring Detroit artists, of which Glenn is the first, Glenn has stunned collectors with a massive work that is on display and available to collect.

Glenn considers himself a figurative abstract artist, and his medium of choice is actually a mix of paints, fabrics and other materials on wood panels. He has dubbed this style “Flat Life,” as the works are two-dimensional but pop with texture and color.

Glenn utilized this colorful style to create a unique 7-foot by 4-foot work, “Accurate Knowledge is Better than Imagination,” a wondrous self-portrait that sheds light on the artist’s soul. The title is a reversal of Albert Einstein’s quote, “imagination is more important than knowledge.”

“If we gain accurate knowledge, we can open our minds to great imagination,” Glenn explains. 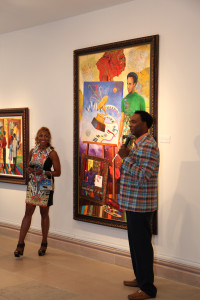 Yolanda and Marcus Glenn with his new work, “Accurate Knowledge is Better than Imagination,” at Park West Gallery.

Like the painting’s title suggests, the more knowledge one has of it, the better one can understand it. Glenn depicts himself in his studio, standing next to an easel displaying the official artwork he created for the 56th Annual Grammy Awards. He says this represents one of the biggest moments in his career.

“At the time, I was going to entitle the piece ‘A Brush with Success,’ and that’s why I put my Grammy piece [in it],” he says. “It’s sitting in the center on the easel in my studio.”

Glenn, a left-handed artist, portrays a brush in his right hand and a Bible in his left. He says by placing the holy book in his dominant hand, he shows the significance it has in his life.

“I peer into God’s word, and it’s like a formula for life,” he says. “That is the most important aspect.” 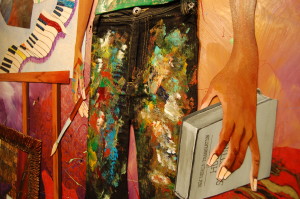 Glenn portrays himself holding a Bible and paintbrush, with the Bible in his dominant hand.

Glenn’s love for his family is apparent when examining the artwork. Propped against the easel’s legs is a framed painting of his wife, Yolanda. A cloth on the floor next to a painter’s palette comes from a dress his mother owned, alluding to her role in supporting his passion for art.

Yolanda’s mother, who passed away recently, is represented by using pants from her wardrobe used as Glenn’s pants in the painting, while Glenn’s green shirt is his son’s, who helps in the studio. One can even find little bees in the work representing Glenn’s four daughters. 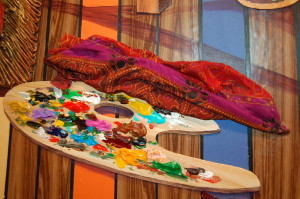 The fabric near a palette is from a dress that belonged to Glenn’s mother. It symbolizes how she encouraged Glenn to pursue art.

Like many of Glenn’s works, multi-colored floorboards provide the foundation for the characters. The various colors represent “the palette of God,” and as Glenn says, God is love.

“You begin to see these slats, which for me it’s the foundation of my heart, which is love,” he says. “Once we as the human race master love, the world will truly be a better place.”

Like most of Glenn’s “Flat Life” artwork, seeing it in person is the best way to fully appreciate the textures and materials he incorporated in the 46 new works he created. Glenn’s exhibition will be on display for a limited time from June 28 to July 12. 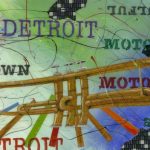 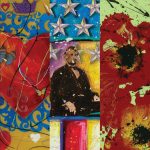