Dominic Pangborn Shows Students They Too Can Evolve Dominic Pangborn is considered an evolutionary artist, constantly reinventing himself by exploring new styles and mediums to hone his talents.

This philosophy of never giving up and working hard is what led Pangborn to succeed, and his recent visit to a Texas school district motivated students with this positive attitude.

Pangborn spoke at a college and career day held at the Round Rock Independent School District in Texas on October 19.  While Pangborn is a professional artist, he didn’t focus on art when speaking to 500-plus students at Stony Point High School in Round Rock, Texas. He instead talked about how having a positive attitude can lead to overcoming obstacles and adversity.

The Detroit-based artist told the students that they will encounter somebody, even if it’s a loved one, best friend or coach, who will tell them they can’t succeed at something.

“You have to take that moment and look at it and say ‘wow, this is an opportunity, I can do something’ instead of walking away,” he says.

As an example, Pangborn shared with students his own hardships growing up. He came to the U.S. at the age of 10 when a Michigan family adopted him from Korea. His limited English made it difficult to communicate, so he learned to be inventive and creative.

He admitted that others didn’t consider him to be “college material” during high school. Despite the odds, Pangborn persisted and attended the Chicago Academy of the Arts, where he majored in graphic design and went on to become a professional artist and designer.

“You have to follow your passion and get a good mindset and visualize what you want to do,” he told students. In addition to the college and career day presentations, Pangborn took the time to talk with visual art students.

“I want to create art for a career and I’m interested in going to school in Michigan so that I can work for the auto industry designing cars,” said Stony Point Junior Alyssa Byrd. “Mr. Pangborn said it is definitely possible. He told me to apply for scholarships and continue with my art and to believe in myself. He said he would help me when I made it to Michigan and gave me his card.”

Pangborn also presented at the Round Rock Opportunity Center on October 20. The center is a facility that works to correct student behavior for students in grades 6-12. Pangborn saw it as an opportunity to give them hope.

“I’ve been in situations they’ve been in,” he says.

In a letter, Round Rock Opportunity Center Counselor Gwen Thomas expressed her gratitude for Pangborn’s time:

“He held the high school students spellbound for nearly an hour as he shared his journey from being an outcast in 1950s Korea, to his adoption by Catholic missionaries in Michigan, to his rise to fame as one of the most celebrated visionaries of this century.”

Be sure to view the artwork from Dominic Pangborn available at Park West Gallery. 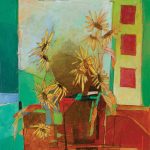 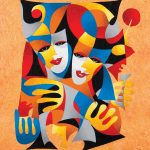