As a child from Korea brought to the U.S., Dominic Pangborn used art as a way of communicating because he lacked confidence in his speaking abilities.

In a twist of fate, Pangborn found himself on a stage in Korea telling this to an audience of several hundred dignitaries, government officials and artists from across the globe on Aug. 24.

Pangborn was the special guest at the Gwangju Biennale and Gwangju International Art Fair in Gwangju, Korea, where he spoke on the theme of “art for humanity.”

The Biennale was founded in 1995 in memory of the civil uprising of the 1980 repression of the Gwangju Democratization Movement. The event features contemporary art, special guest exhibitions and performances and is the oldest contemporary art biennale in Asia. Having been a professor at the College for Creative Studies in Detroit and speaking in front of collectors at Park West events, Pangborn is no stranger to public presentations. However, the revolutionary artist admits he had some jitters, especially when he found out he was not one of many speakers, but the only speaker.

“I was nervous how much of it was going to be lost in translation, but I went ahead and did my usual and spoke from the heart,” he says.

Pangborn shared his story of growing up as the 12th child in his adopted family, saying that by opening their doors to him, they showed him a form of art: “To love and care for another child with no strings attached – unconditional love is a masterpiece.”

He told the audience how he was drawn to art for its ability to express ideas, which led him to attend art school in Chicago to continue expressing himself:

“So I became a successful graphic designer. I created jobs, taught people how to harness their creativity. I also joined every civic organization, every charity, and just about every group that would have me. I knew if I wanted to make a difference, I’d have to do more than just express my art. I’d have to walk the path of others, from poor to rich, from young to old, from color to color.”

He concluded by telling everyone that: “True art is helping others, building a community where we all can live in peace.” He says the translation must have been excellent, as even those in attendance who didn’t speak English wanted to talk with him and let him know they appreciated his message.

“It couldn’t have gone any better, it was mind-blowing,” he says. “It was the grandest event, it was beautiful.”

Following his return home, Pangborn told Park West that the event was a major success, and he hopes to attend it again in the future. He says he expects future opportunities to speak in Korea following the event, and even anticipates it to influence in his future artwork.

“I’ll probably have a lot more of the humanity side in my art,” he says. “Even if I don’t think about it, I’m sure it’s already filtered into my brain somewhere, so when I paint it’s going to reflect in the works.” Read Pangborn’s full speech here, and be sure to check out Park West’s Pangborn art collection. 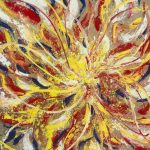 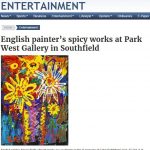