Dominic Pangborn is known for his revolutionary approach to art with bold colors and patterns; now he is using this unique style to fund mental health research.

Pangborn released a set of scarves and ties that feature human stem cell images. Each person who adds one to their wardrobe contributes to moving science and research forward.

In addition to creating art, Pangborn is known for his fashion accessories, which have become synonymous with the Detroit business scene, so it was a natural fit for Pangborn to team up with the University of Michigan for the project.

“One of my greatest joys is to ‘pay it forward’ and give back to the community,” said Pangborn.

The creations are a partnership with the Heinz C. Prechter Bipolar Research Fund, and were released in conjunction with National Mental Health Awareness Month (May). The designs are based on images of neural stem cells generated by University of Michigan scientists through Prechter-funded research. Pangborn combines these with the hopeful shapes of butterflies.

“I decided to add butterflies to the design because they signify metamorphosis,” he says. “Our society is finally at a point where mental illness is openly talked about and research is taking a turn for the better.” All net proceeds from the sales of the scarves and ties will go directly to the Prechter Fund to support bipolar research projects at the University of Michigan Depression Center.

The program includes research into the basic mechanisms of bipolar disorder. The scientists generate stem cells from skin cells donated by people with the illness and those without, then grow the kinds of neural cells found in the brain. This allows them to find differences in the cells at genetic and molecular levels, which in turn gives them the opportunity to test different medications. Along with the scarves and ties, Pangborn held a fundraising event at his Pangborn Collection store in Ann Arbor on May 5, where 20 percent of the proceeds from the evening benefited the Prechter Fund. Melvin McInnis, scientific director of the Heinz C. Pretcher Bipolar Research Fund and K. Sue O’Shea, director of the University of Michigan Center for Pluripotent Stem Cell Research, spoke at the event alongside Pangborn.

“By understanding the causes of bipolar disorder, we will be able to develop new treatments for the illness and most importantly, we’ll be able to prevent destructive mood episodes. Our ultimate goal is to allow people to live happy, normal lives,” said McInnis.

The ties and scarves are $95 each. Visit www.pangborncollection.com for more information and to purchase an accessory. View Pangborn artwork here. 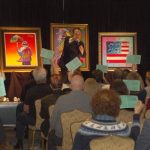 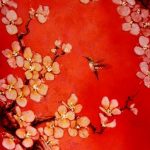