“Artist’s Mother with her Hand on her Chest” by Rembrandt.

Wingate University is celebrating a donation of Rembrandt and Peter Max art that was originally acquired through Park West Gallery.

The Charlotte Observer reports that on Jan. 22, the university revealed that Dr. Lee Bates and his wife, Dawn, donated seven Rembrandt works as well as artwork from iconic pop artist Max.

“What a marvelous contribution Dr. Bates and his wife have made,” university spokesman Jeff Atkinson said Friday (Jan. 23). “I’ve never seen a real Rembrandt, and now we’ll have seven.”

According to the article, Bates was inspired to start collecting art when he was on a cruise to Bermuda in 2005. He attended an onboard art auction where he acquired a photo of Muhammad Ali with the Beatles that was signed by Ali. From there, he “got caught up in the auction” and acquired the Rembrandts.

Many of the Millennium Impressions are sold out and can only be found in private collections or galleries.

The etchings donated to the university include: “Self Portrait at a Window,” “Bust of a Man Wearing a High Cap,” “The Golf Player,” “The Card Player,” “Artist’s Mother with Hand on Her Chest,” “Christ and the Woman of Samaria” and “Landscape with a Cow.”

The article does not specify which Max artwork was donated, but Bates did keep the Ali/Beatles photo for himself.

The artwork hung in his dentist office, located across the street from the university, until he sold his 22-year-old business in June. Bates said very few people and patients realized they were Rembrandt etchings. He decided the artwork should be donated to the museum following their daughter’s graduation from the university.

The art donation was made over the summer, but the artwork was first displayed on Jan. 27 in the Helms Gallery at the Battle Center. 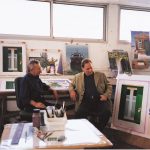 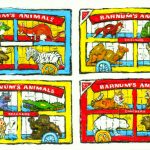