Behind the Artist: Marc Chagall

At its height, Modernism rested upon a single conviction: to illuminate humankind’s brutal truths. Unlike many of his avant-garde peers, Russian-born artist Marc Chagall showcased his creative command by envisioning optimism, empathy, and resolve in his work. 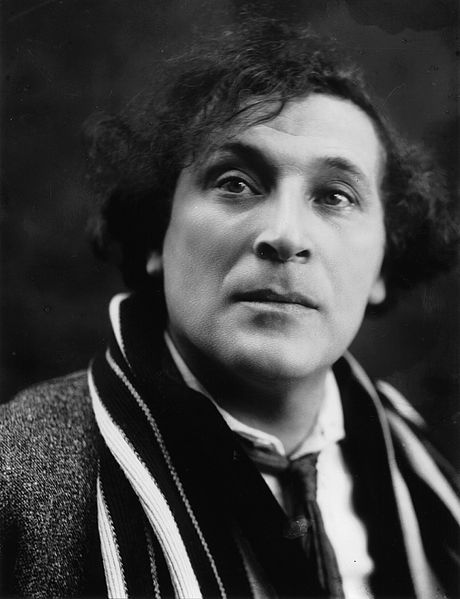 As a testament to the human spirit, Marc Chagall’s artistic talent not only rivaled the accomplishments of many great modern masters, it earned their praise.

In Françoise Gilot’s memoir “Life with Picasso,” Pablo Picasso is documented as having famously argued: “When [Henri] Matisse dies, Chagall will be the only painter left who understands what color is…some of the last things he’s done in [Saint-Paul-de] Vence convince me that there has never been anybody since [Pierre-Auguste] Renoir who has the feeling for light that Chagall has.”

Renowned for his aptitude and innovation in a variety of mediums, including painting, theatre design, tapestry, stained glass, etching, and most of all, color lithography, Marc Chagall’s influence on contemporary visual culture continues to unfold. 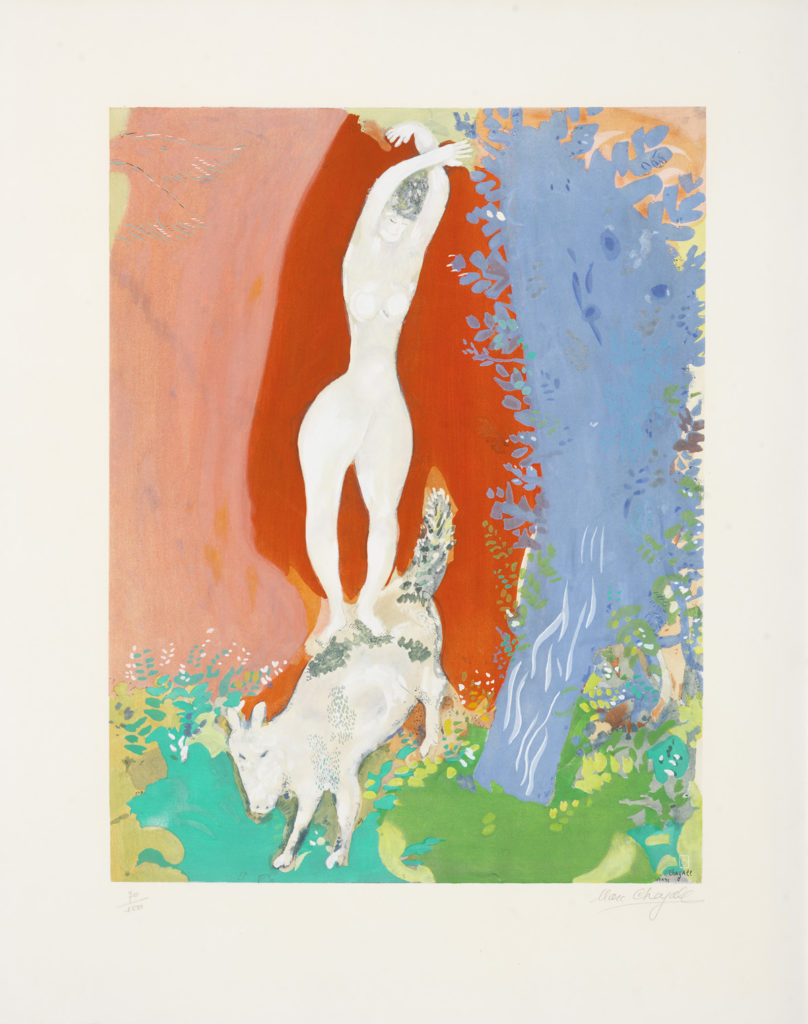 Marc Chagall was born Moishe Zakharovich Shagalov in 1887 to a devout Jewish family from Vitebsk, Russia, now modern-day Belarus. The lyrical and often allegorical compositions that define Chagall’s body of work are greatly inspired by his unwavering faith and altruistic outlook. Although Chagall is widely-considered to be the quintessential Jewish artist of the 20th century, the expressionist master asserted that his artwork does not discriminate or embrace any one system of beliefs. Often celebrated for reawakening art’s poetic capabilities, Chagall underscores humanity as a whole. 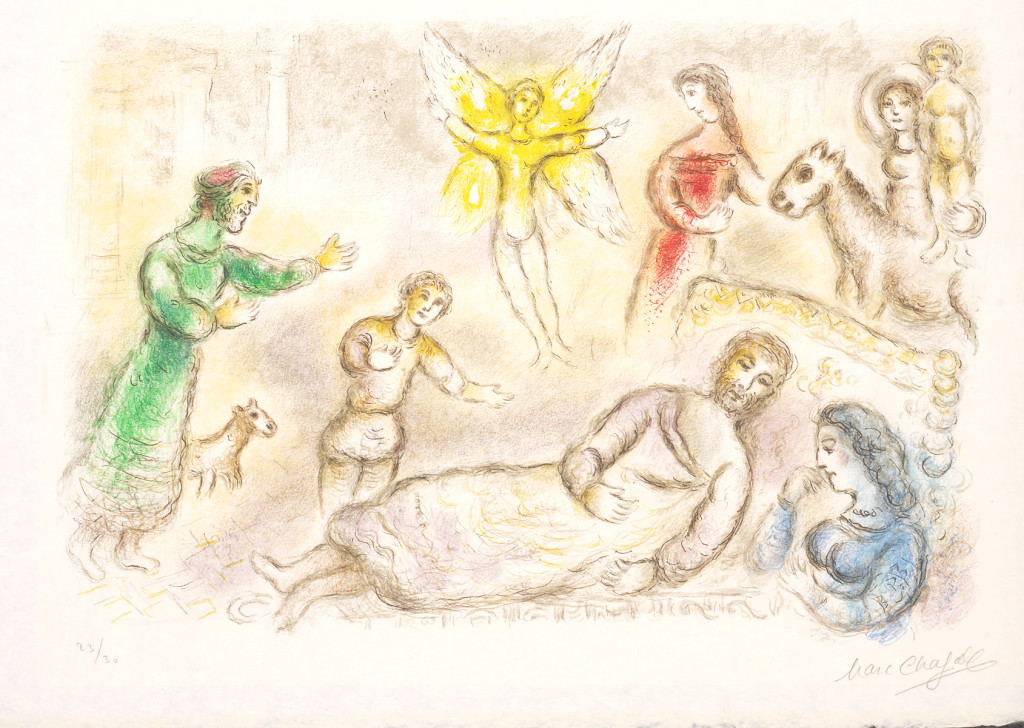 To further establish the universality of his work, Chagall did not embrace or align with any singular movement or artistic tradition. Chagall employs many techniques characterized by Cubism, Fauvism, Symbolism, and Surrealism—skewed dimension, non-representational color, transfiguration, and dreamlike imagery, respectively—yet he abided by a unique expression that eludes common classification. 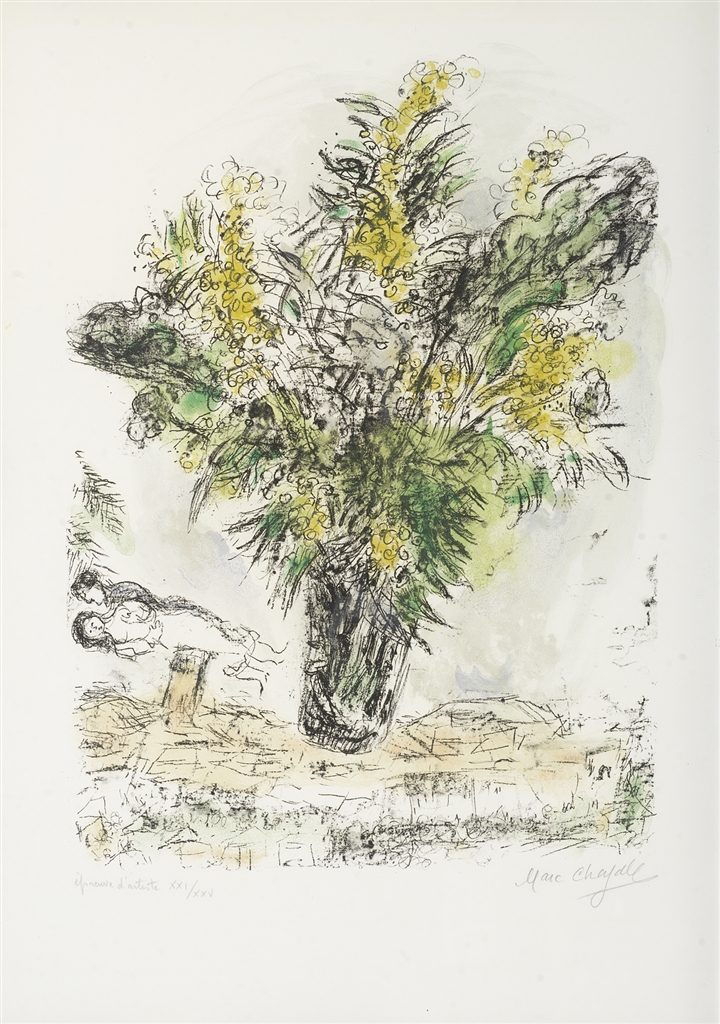 Vollard commissioned Marc Chagall to illustrate Nicolai Gogol’s “Les Ames Mortes,” and the French literary classic “Fables” written by Jean de la Fontaine, resulting in an extensive collection of some of Chagall’s most evocative works. Chagall also began creating a series of etchings and engravings that illustrated the Bible in 1931 at the behest of Vollard. Chagall created 65 etchings from 1931 to 1939, but the escalation of the Second World War and Vollard’s sudden death halted the ambitious commission until 1952. The artist finally completed the extensive undertaking four years later. 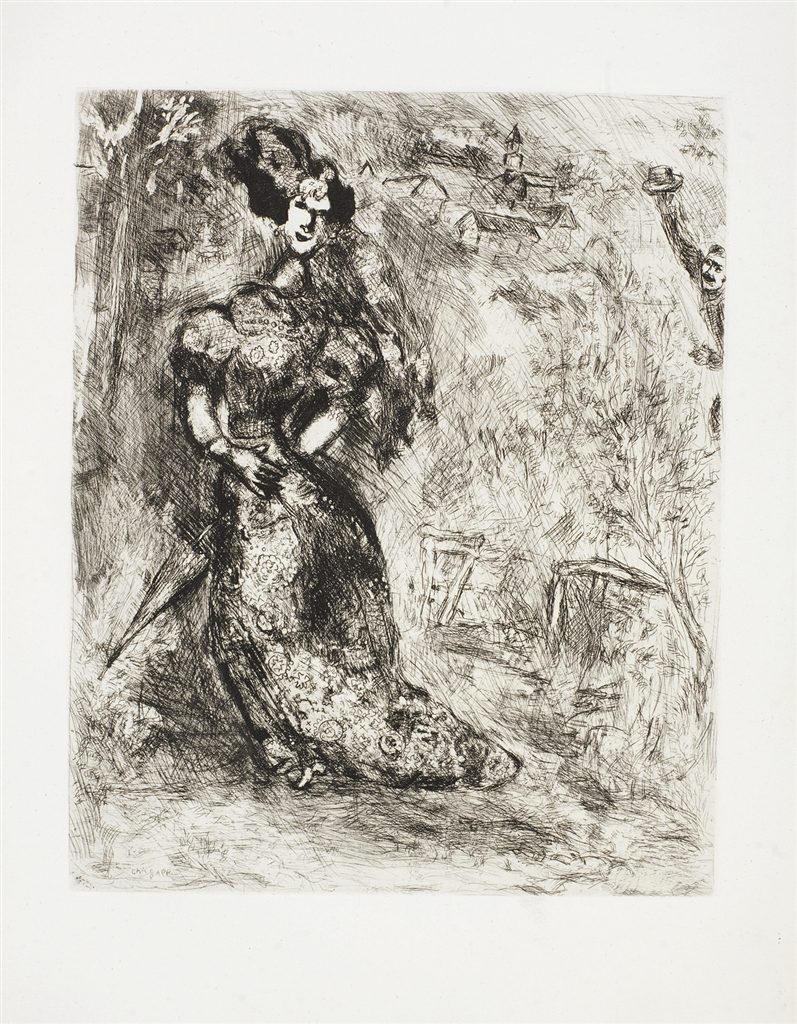 The Russian master continued to rival the artistic achievement of paint with the technical refinement and emotional charge of lithography. Ironically, Marc Chagall only began to entrust the medium when he was 63 years old, though he is widely-considered to have revolutionized and innovated the practice’s color capabilities. 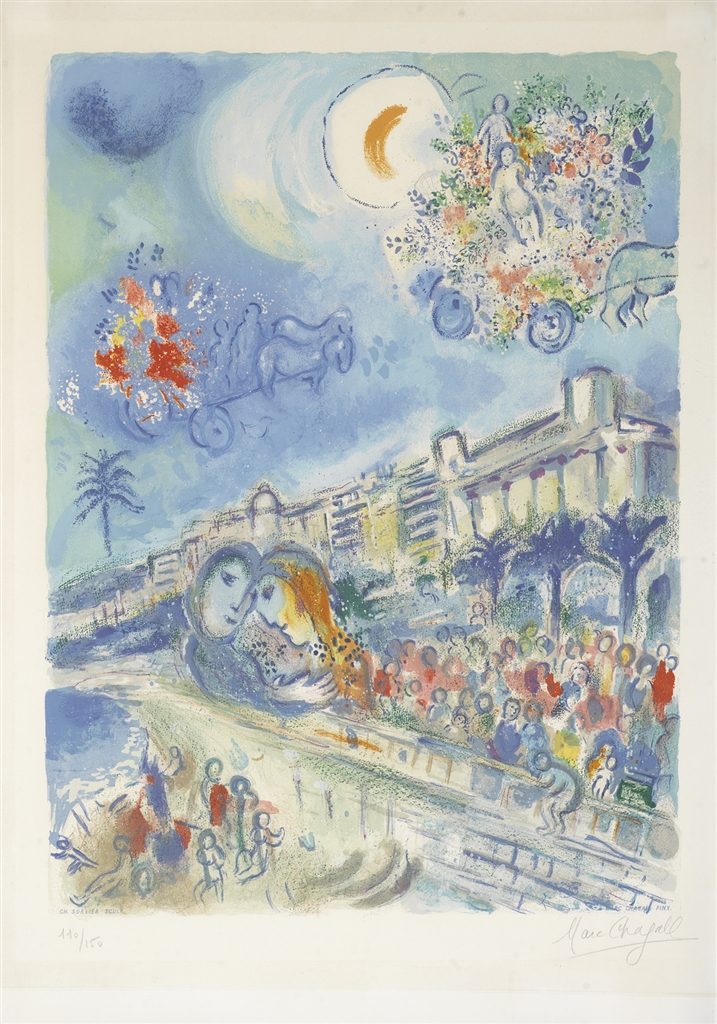 In 1961, Chagall translated a series of gouache paintings illustrating the love story “Daphis and Chloe” into a historic collection of limited-edition lithographs of the same name.

During his lifetime, Chagall participated in several monumental exhibitions at the Louvre, the Grand Palais, the Royal Academy, the Jewish Museum, and the Art Institute of Chicago, among countless other venues. 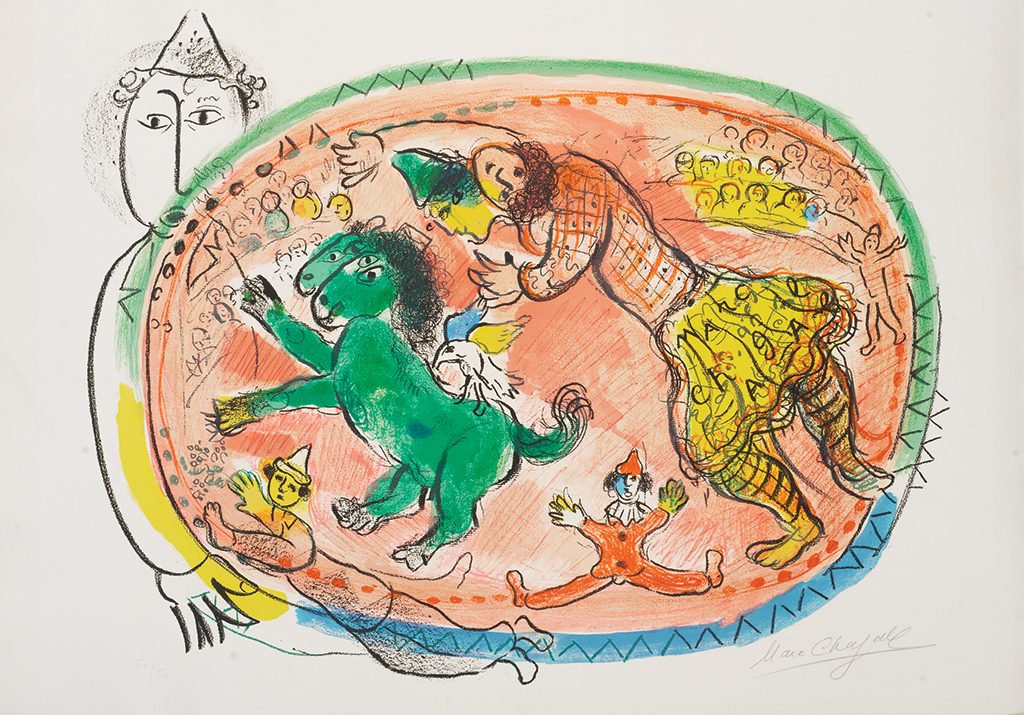 In 1964, Marc Chagall was commissioned to paint the ceiling of the Palais Garnier at the seat of the Paris Opera. Although many critics argued that a Russian artist could not adequately interpret France’s history, the Paris Opera ceiling was met with much acclaim and is a hallmark of intellectual and creative achievement.

Chagall’s charming and optimistic compositions belie the fact that Chagall faced decades of anti-Semitic displacement in his native country, as well as in his adopted home of Paris following World War I and II. In 1940, Chagall, his first wife Bella, and daughter, Ida, narrowly escaped Nazi-occupied France before immigrating to the United States a year later.

The Chagall family was among a group of 2,000 artists and intellectuals who fled to the United States with the help of American journalist Varian Fry in response to the rise of fascism across Europe. 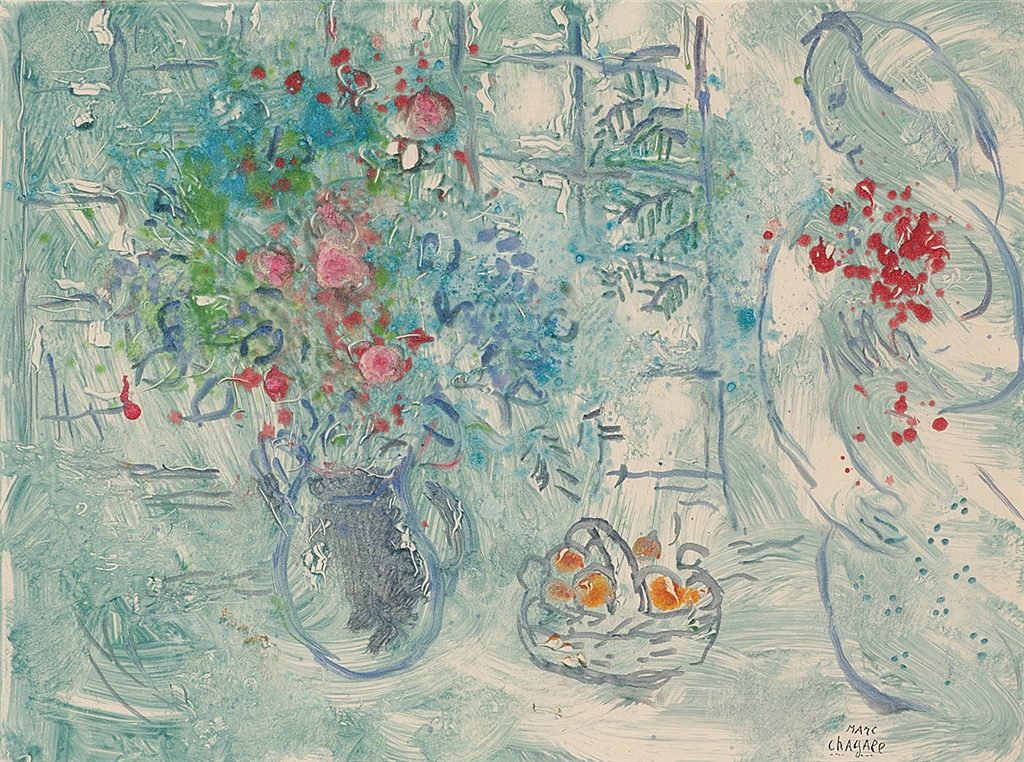 Chagall returned to France in 1947 and remained there until his death in Saint-Paul-de-Vence in 1985.

In many ways, Chagall’s work merely rustles toward a dream of universal peace. Marc Chagall affirmed that his work ought not to be viewed as a living picture of the world, but rather as an embodiment of empathy most-capable.

To add a Marc Chagall masterpiece to your collection, register for our exciting online auctions.  You can also contact our gallery staff by calling (800) 521-9654 ext. 4 during business hours or email sales@parkwestgallery.com for inquiries after hours.  Follow Park West Gallery on Instagram to stay up to date on our featured artists. 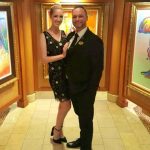 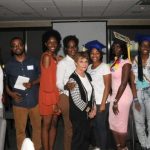