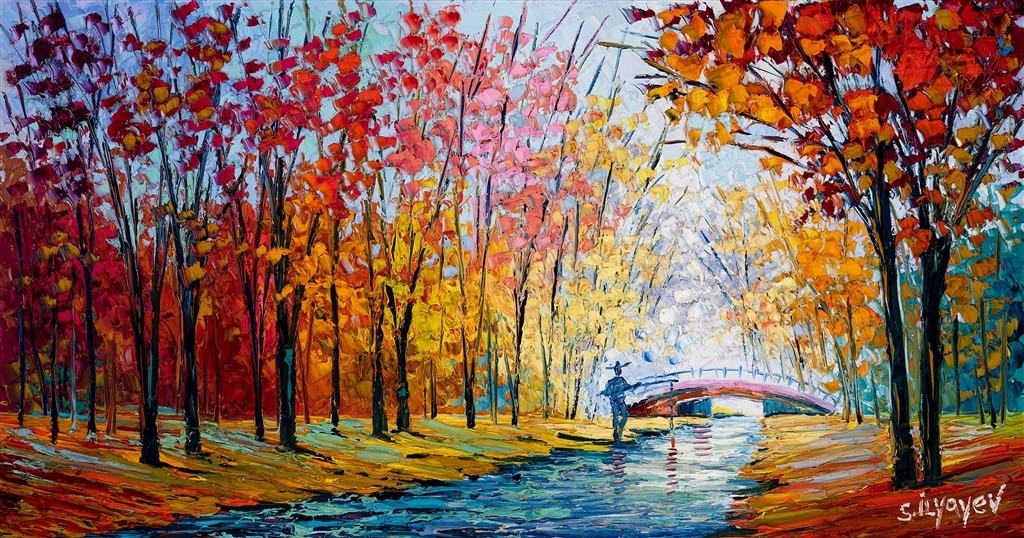 Collectors around the world love the remarkably textured paintings of acclaimed artist Slava Ilyayev. While his style is uniquely his own, Ilyayev regularly cites Impressionists like Vincent van Gogh and Camille Pissarro as major influences on his work. So it begs the question—Is Ilyayev an Impressionist?

Because it’s one of our most frequently asked questions from Ilyayev’s collectors, we asked art expert and Park West Gallery Director Morris Shapiro for an answer.

Here’s what he said:

The question is often asked when viewing the paintings of Slava Ilyayev, “Are these Impressionist paintings?”

One of the first and most influential modern art movements was Impressionism. The Impressionist painters sought to break away from the illusion of reality in painting, and to allow painting to become “paint-ing”—that is, no longer smoothing out surfaces, allowing brush strokes to become visible, and even, in some cases, to allow the raw canvas to remain exposed.

This, of course, unleashed painting from nature and launched more than 100 years of visual exploration and evolution in the realms of pigment on canvas.

Ilyayev’s canvases certainly continue the tradition of facile and free brushwork (in his case primarily, palette knife work) as employed by the likes of Monet, Renoir and Pissarro. But Ilyayev has also moved beyond the Impressionist and Post-Impressionist concerns with light at play on myriad surfaces and the rejection of local color. Instead, he favors emotive color and a focus on texture and the painting surface. He has arrived at a new and very unique synthesis, placing his own stamp on these pictorial innovations. 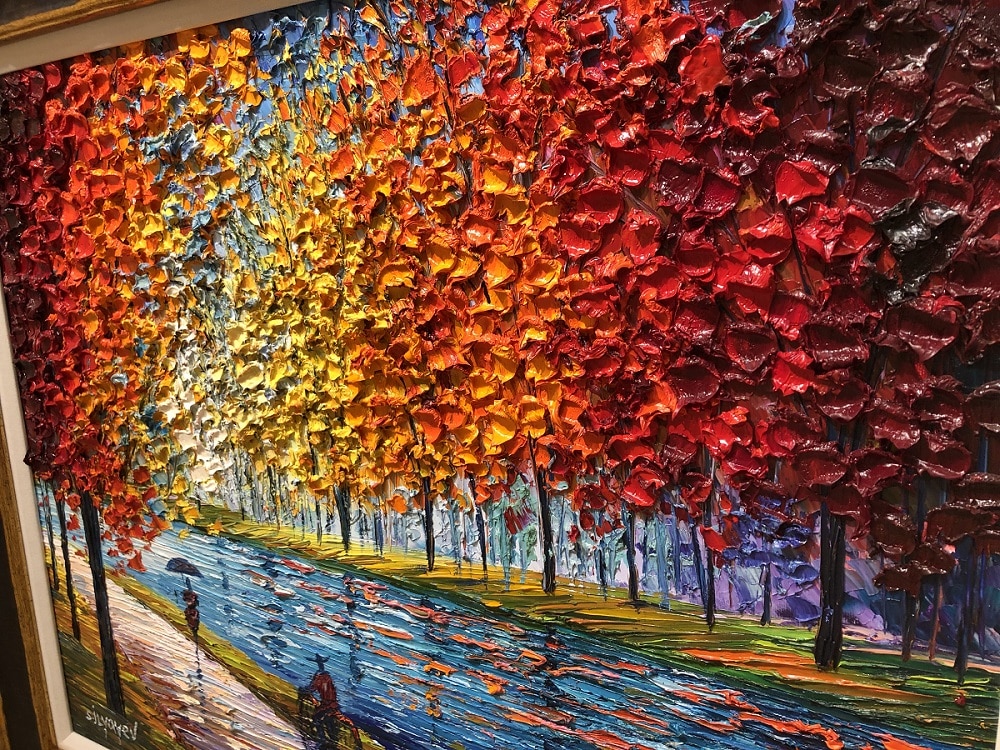 In the latter part of the 20th century, painting moved toward an emphasis on surface. Pictorial, representational subjects became absent and the application of color and texture and the manipulation of paint became the primary concerns of the Abstract Expressionists and Color Field painters.

Ilyayev has likewise embraced these innovations and taken his use of texture and the painting surface to another level. By incorporating large and thick applications of oil paint onto his painting surfaces, he has added a further dimension to his work. While still retaining a defined, recognizable subject and employing a careful calibration of color—not unlike the Impressionists and Post-Impressionists—combined with his emphasis on bold and dramatic textural surfaces, Ilyayev has developed a fresh approach.

Another question often posed about Ilyayev’s work concerns his use of similar and repeated subjects. This is often mistaken for a lack of imagination in an artist’s work, or a desire to remain commercially viable. In reality, it is a historically common practice by artists of the highest regard. Consider the multiple paintings of haystacks by Monet; the paintings of Mount St. Victoire by Cezanne; Picasso’s innumerable images of the artist and model; and Peter Max’s multiple manifestations of the “Umbrella Man.” 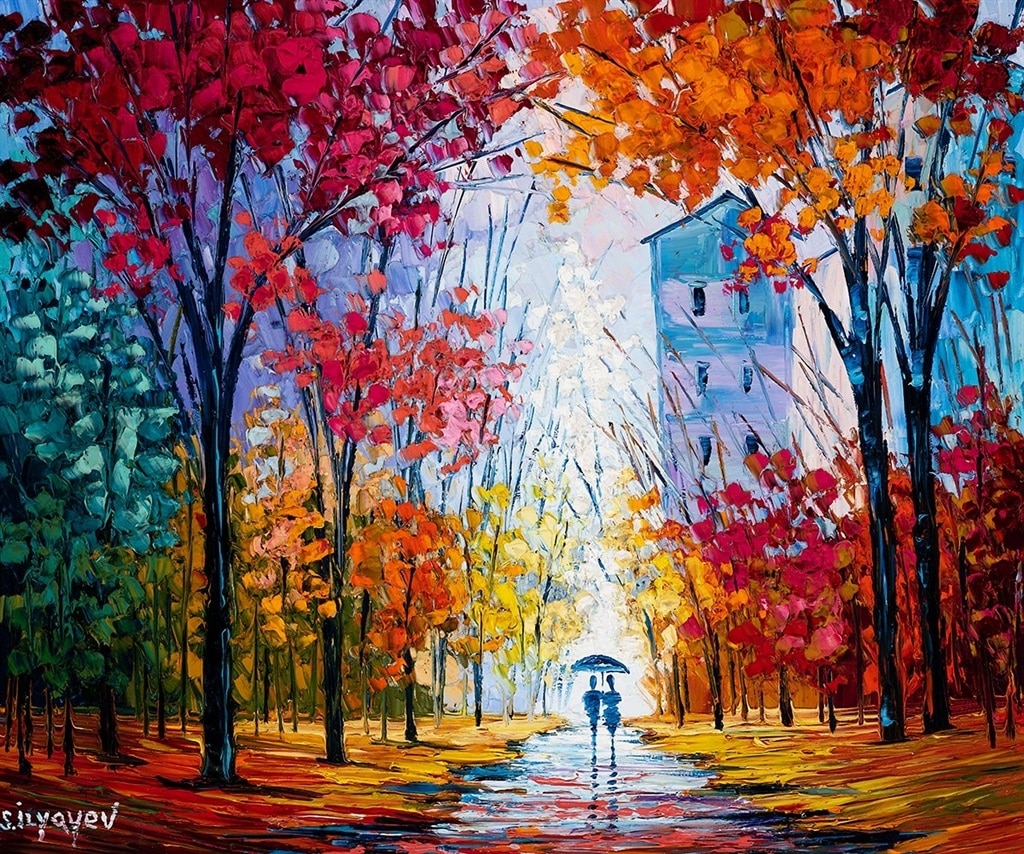 These artists, in their own individual ways, were pursuing the same goal. By limiting their subjects and delving deeper into their structures, they were able to push the boundaries of their visual ideas, techniques, and fluency, to extract as much as possible from a limited number of variables, and to “flex” their artistic “muscles.” Thus, the subject (which still may retain poetic content) has become a repository—a receptacle—for the artist’s painterly ideas and mastery over form.

A Closer Look at Ilyayev’s Style 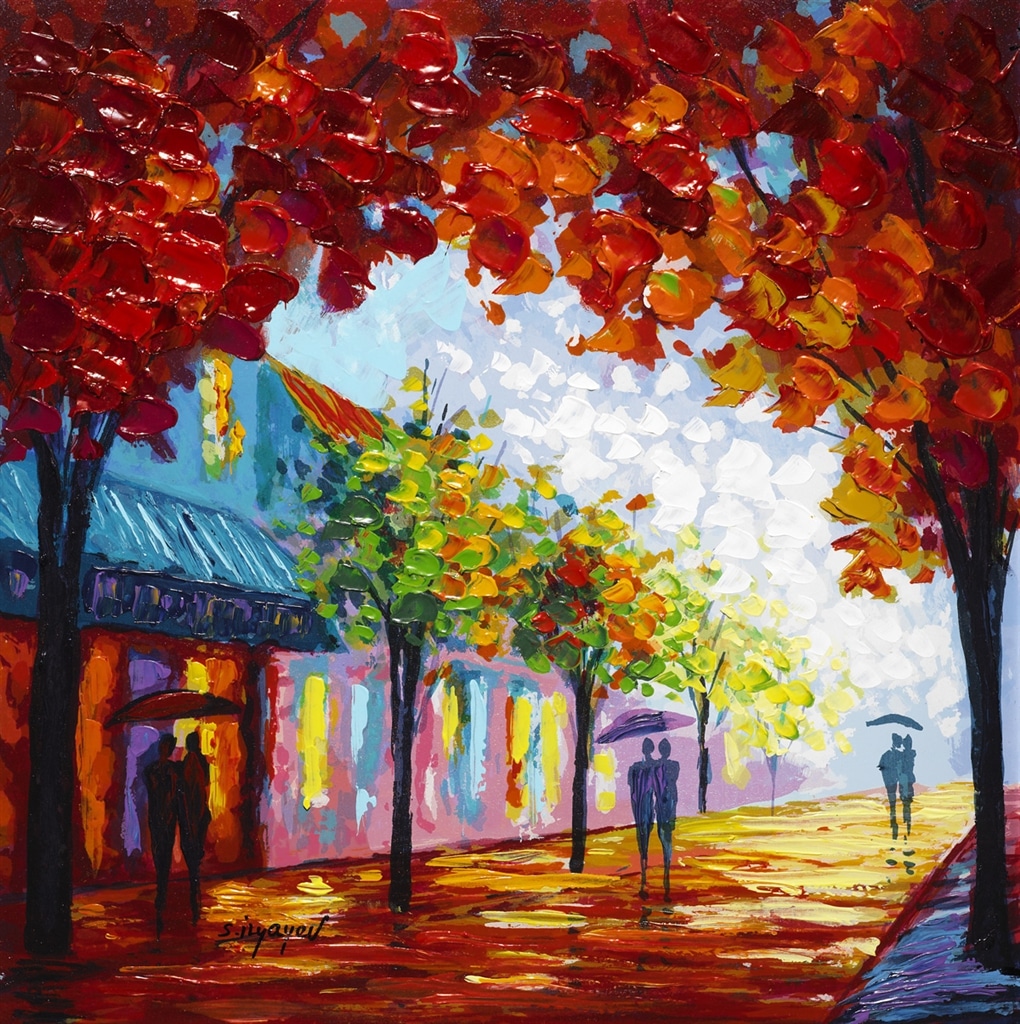 “Caught in the Rain,” Slava Ilyayev

Consider the painting, “Caught in the Rain.” Here, Ilyayev employs his familiar subjects of couples walking in the rain with umbrellas and an outdoor café. He has placed these in a quaint setting—perhaps a small European village—and he drives the viewer into a deep, receding space through formal devices as directed by the buildings to the left, which are punctuated by the trees moving back into the distance.

At the same time, he brings the surface of the painting to prominence through the use of his bold and forceful impasto technique depicting the trees in the foreground. 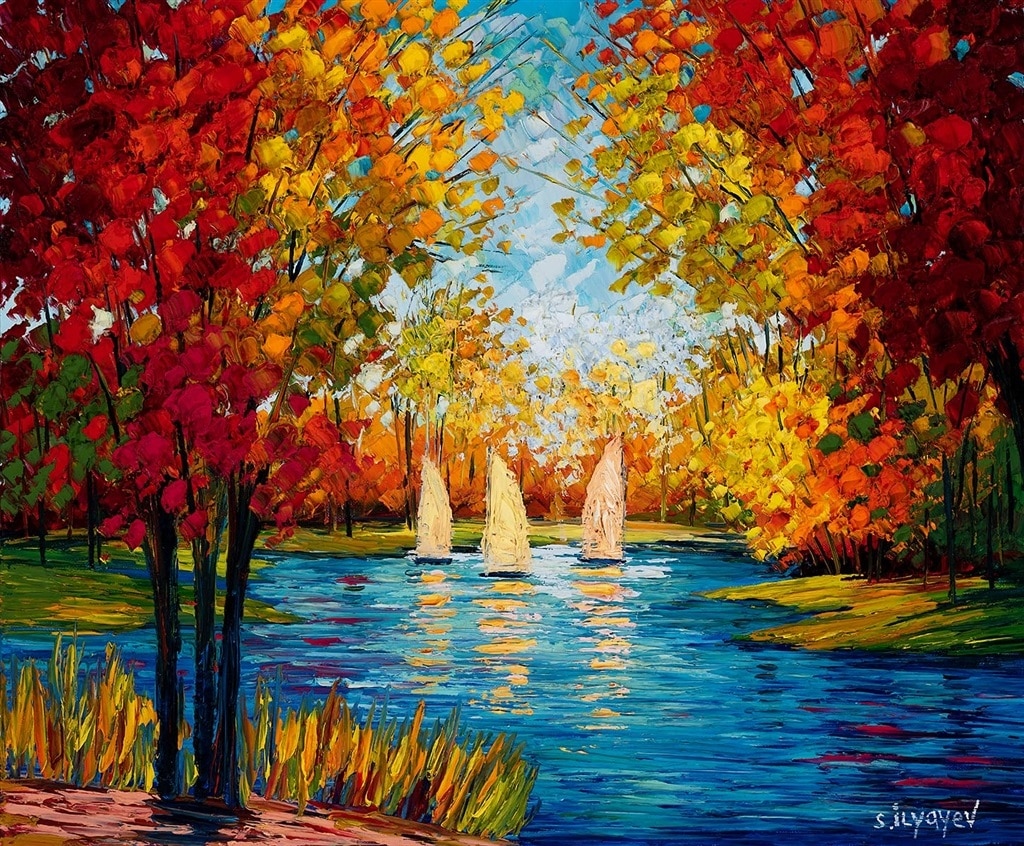 The painting, “Sailing in the Forest,” demonstrates Ilyayev’s ability to extract and develop new approaches from his familiar subjects through an emphasis on the surface. In this work, he blurs the spatial positions and relationships typically depicted in his works and brings nearly all of the visual activity to the surface of the painting.

This seemingly ambiguous space, however, is developed and resolved through clever visual devices so that the viewer senses no absence of perspective and depth. We look past the textural color patterns at the front of the picture plane and intuitively perceive the space depicted. 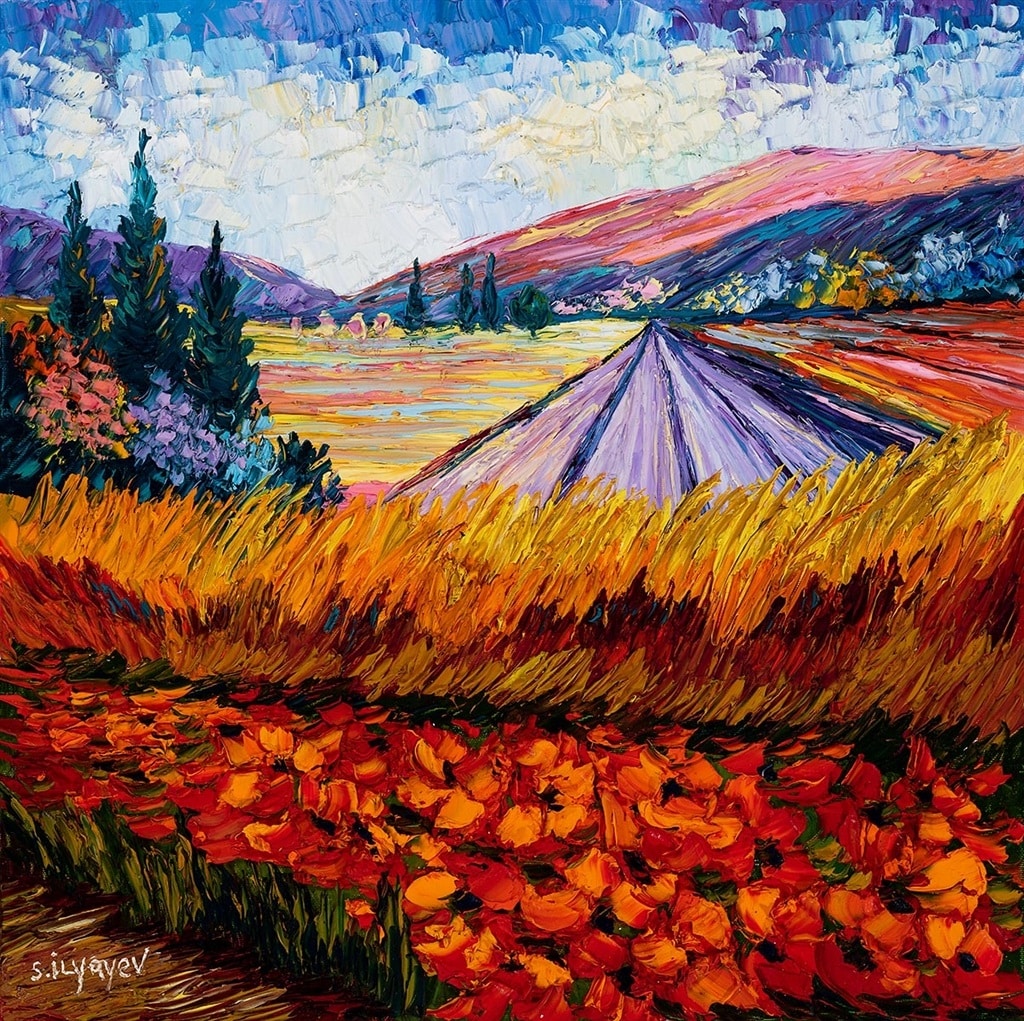 In the painting, “Colorful Valley I,” Ilyayev departs from his traditional subjects and composes a beautiful and highly energetic landscape. In perhaps an homage to Van Gogh, his focus is on visual energy. The painting explodes from the canvas, and along with the precise balance of the warm and cool colors of the flowers and farmland, he accentuates the energy of the work through his carefully arranged brush and knife work moving around the scene and creating a colorful rising effect.

Ilyayev has created an imaginary image here, but has, at the same time, grounded the subject in reality. He accomplishes this through the shadow of the vase to the bottom right and the placement of the horizontal table which enhances the definition of the pictorial space.

As a highly gifted and skilled painter, Ilyayev represents a refreshing contribution to early 21st-century painting. He has embraced the ideas and innovations in the history of modern painting, from the Impressionists and Post-Impressionists to the Color Field and Abstract Expressionist painters, and has brought these historic contributions to painting into our own time through his unique vision.

He has also answered the question so often posed about his work, “Are these Impressionist paintings?” with an accurate and yet paradoxical response: “Yes, and no.”

To collect the artwork of Slava Ilyayev, register for our exciting online auctions or contact our gallery consultants at (800) 521-9654 ext. 4 or sales@parkwestgallery.com. 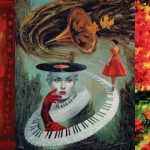 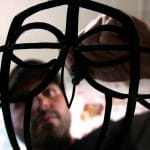