Calling a work of art “absurd” could be interpreted as an insult, but not for Michael Cheval, who is thrilled to present artwork that turns reality on its head. Cheval is considered a master of “Absurdist” art. This doesn’t refer to it being unreasonable or foolish. Instead, he defines Absurdism as a style and philosophy that shows an inverted side of reality that juxtaposes things that shouldn’t exist together in a realistic style in order to invite people to look at life differently.

“Absurdity, like any other genre, has its own rules. But it implies everything that is outlying of common rules and boundaries,” he says. “‘Absurdism’ is an attempt to understand our life the way it truly is. Without propaganda, ideology, politics, and imposed tastes.”

Cheval’s greatest artistic influences are Surrealists Salvador Dali and Rene Magritte. However, Cheval doesn’t consider himself a Surrealist, as his ideas originate in imagination as opposed to dreams or the subconscious. He also draws influence from authors like Lewis Carroll and Edward Lear, both of whom he calls “fathers of absurdity.”

Each of Cheval’s works has a hidden story or meaning behind it. The inspiration behind these themes is typically drawn from literature, especially philosophical and historical books. The metaphors that form in his head create abstract images that he translates into detailed paintings.

Cheval compares his paintings to puzzles, challenging viewers to discover their meanings and allusions. The name of the painting is often the first clue – a key that begins to unlock the mystery.

“From the title, you can jump up with any explanation,” he says. “If you have the title and the image, it’s like a game.”

The game of absurdity When deciphering Cheval paintings, the human figure is alluded to, while figurative objects are used as symbols. As an example of Cheval’s game, examine the painting “Fifth Element.”

The name alludes to the four elements of earth, fire, wind and water, so Cheval wants to depict what he considers the fifth element. The clown-like figure of a woman in the painting appears to be juggling glowing white spheres that hover and interact with the sky. Meanwhile, she dons a cape made of the sea.

So what is the fifth element? According to Cheval, it is the moon due to how it affects everything from tides to metals:

“What is the moon to the Earth? What is the enigma and legend behind the moon?” he says. “The moon has so much influence on the Earth that it could be the fifth element.”

However, despite Cheval’s meanings, he doesn’t want to limit viewers to just one interpretation. In fact, he encourages his audience to provide their own unique meanings, which in turn spawn new ideas and a higher understanding of the artwork.

“People insist on an explanation, but I think it’s really cool when you try your own,” he says. “When you do your own you’re like a co-author, it’s co-authorship. You create your own story, and the image belongs to you now.” Finishing a painting can take anywhere from two weeks to five months depending on the image and its story. He says every detail matters in his paintings, so even the smallest brush strokes are critical.

He understands that absurd art isn’t for everyone, but even the naysayers are an encouragement for him to continue painting.

“I have seen people act aggressively to my work – if they don’t understand it and they turn aggressive,” he says. “It is a good thing, because people don’t have just one look and walk away. Even the negative reaction is a reaction.”

If you are interested in collecting the absurd art of Michael Cheval, register for our exciting weekly online auction or contact our gallery consultants at (866) 708-4789 ext. 4 or sales@parkwestgallery.com. 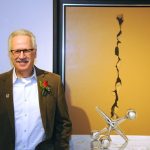 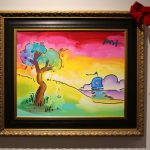