In the studio – (Laughing) with Charles Bragg

Spending time with Charles Bragg means spending time laughing. The son of traveling vaudevillians, he’s truly a master of comic timing and finds the humor in all things, something clearly reflected in his artwork.

“There are impressionists, expressionists and I’m sort of an aggravationist,” he says, of his artistic commentary on the human comedy. Charles Bragg holds a print depicts a painting he had made for his friend, the comedian Jonathan Winters. It’s Winters commandeering a hearse and proving wrong the saying “You can’t take it with you.”

Charles Bragg started as a traditionally minded young artist – but then during the turmoil of the 1960s realized he wasn’t painting what he was thinking. He began to put his thoughts into his paintings – not in a nagging but instead a comedic way – which evolved into his recognizable style.

His first one-man show that included his new quirky and offbeat artwork was in 1968. He wasn’t sure how collectors would respond to the work – and it sold out.

Charles starts his days meeting and discussing the news and happenings of the day with friends at the historic Los Angeles Farmers Market, after which he eagerly returns to his easel in his busy studio space in the center of his Southern California home. A look at Charles Bragg’s studio.

In recent years, Charles has melded the stylized character of his earlier works with large, colorful and conceptual abstract works. 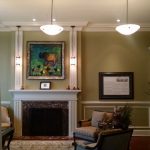 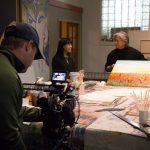