Street art: Duaiv and a Lamborghini Duaiv sent Park West Gallery this photo of him at home with the Lamborghini Aventador Roadster.

French-American painter Duaiv and Lamborghini of Miami are bringing art to the streets by way of a Lamborghini Aventador Roadster. The Park West artist’s creation is lighting up the social-sphere on Twitter, blogs, Facebook and auto-aficionado sites.

“But cars are an expression of our passion, our soul. You don’t buy an Aventador Roadster because you’re a modest person, why not do it up? And when the one to do it up is one of the contemporary era’s most influential impressionists? Well, let’s just say ‘art in motion’ never made more sense.”

“Armed with fierce creativity and unique vision Duaiv has created one of the most striking art cars in recent memory, using the Lamborghini Aventador Roadster as his canvas … Unlike some of the more … extreme wraps that have graced Lamborghinis in recent years, this example, translated from the canvas to the car, makes for a truly delightful marriage of automotive and artistic inspiration.”

This isn’t the first high-performance auto the Park West painter has wrapped with his signature style, he’s also created art for a Ferrari FF that’s in production now and this Ferrari 458 Italia, below. We took in this February when we were visiting Duaiv at his home and studio in Florida. That’s a Ferrari 458 Italia.

For an up-close look at the Lamborghini and to learn more, check out the Dupont Registry and some of the Twitter links below. 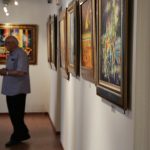 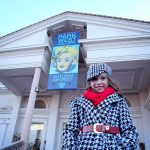