In reflecting back on the last 30 years with Yaacov Agam, I realized I could write a volume on the memories that our family has shared with the artist and his family. From our first meeting at his studio in Paris, to his farm outside of Paris, to his home in Israel—we have watched each other’s children become adults and begin their careers.

The visit for which I will always be indebted to Agam was our Jerusalem trip, during which he would complete the signing of an edition while we stayed in his home.

Agam was kind enough to ask me if I would like to take a tour of Jerusalem since I had never been there before. The answer was an emphatic yes!

Yaacov Agam’s sculpture at the Wailing Wall in Jerusalem. Each of the six 6-foot-high transparent glass pillars is topped by a stainless steel Star of David, and each represents one million of the Jews killed in the Holocaust. The glass pillars, which are lighted from within by gas-fed flames, are set in small fountains of water. The Hebrew word for heaven, shamayyim, is a combination of the words for fire and water. In between each of the glass candles are large steel letters spelling out the Hebrew word yizkor, or remembrance. (Source) Photo ©Park West Gallery, 2010

Agam arranged for me to have a driver and asked his close friend to accompany me around the city. What a trip! We visited The Wailing Wall (where Agam’s sculpture sits as a memorial), sacred churches, synagogues, museums, and even enjoyed a camel ride. It was a great and moving trip.

Upon our return to Agam’s home, and with the signing completed, Albert and I joined Agam and his family for Shabbat dinner.

Read more of Mitsie’s Memories: A Tribute to Marcel Mouly 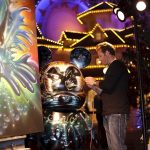 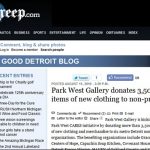