Lebo Tells the Inside Stories Behind 8 of His Amazing Creations 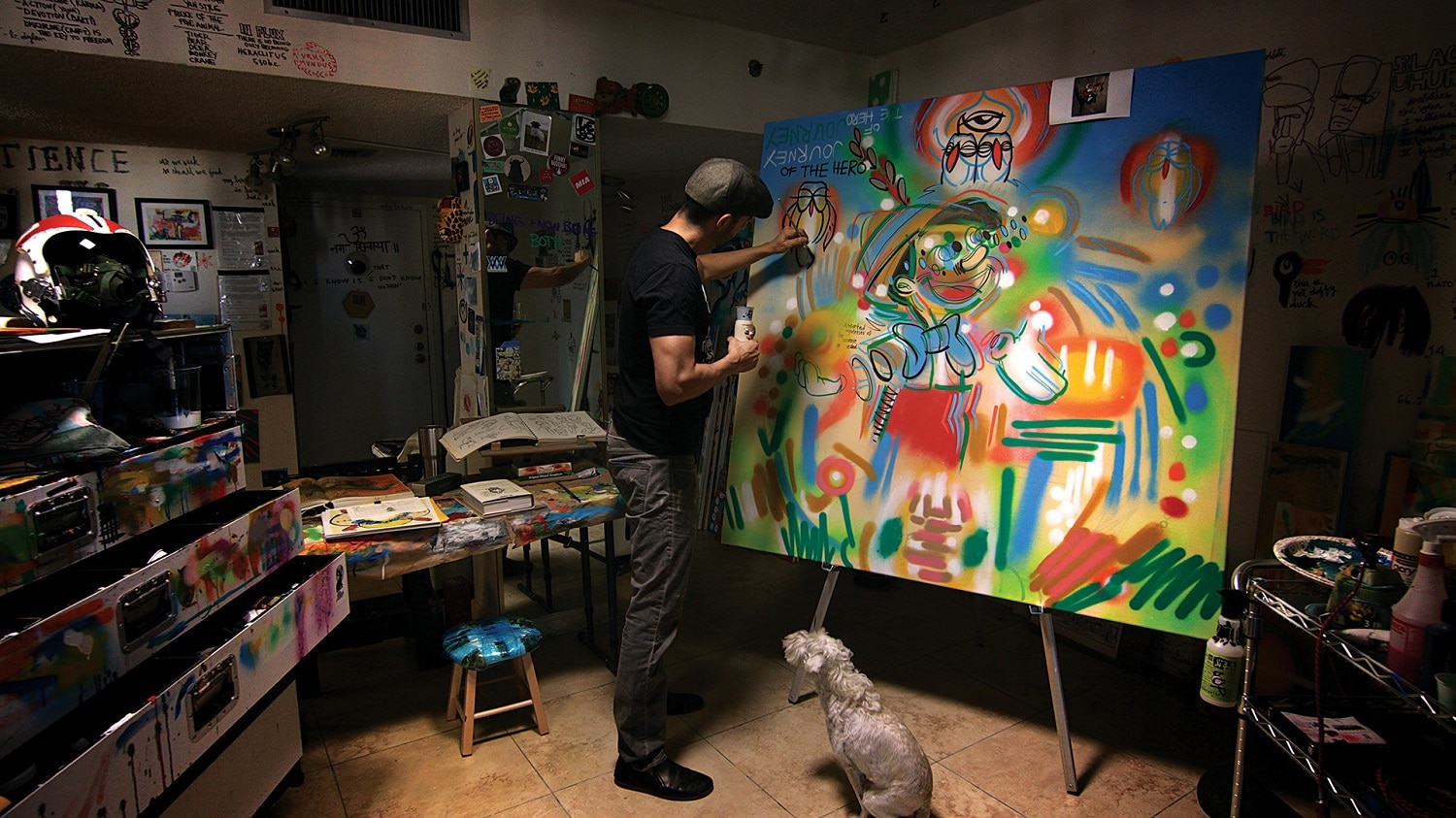 Miami artist David “Lebo” Le Batard puts a lot of thought into his art—and we mean A LOT.

If you ever have the chance to talk to Lebo about his artwork, you will quickly find yourself taken aback by the sheer level of insight and hidden meaning he embeds into every single composition.

He’s a student of history and philosophy, and those influences (and more) act as subtle inspirations for his artistic creations, adding enormous depth and detail to his postmodern expressionist art.

We sat down with Lebo and asked to hear the hidden stories behind 8 of his amazing works. His answers, as always, did not disappoint…

BE STILL MY LOVE 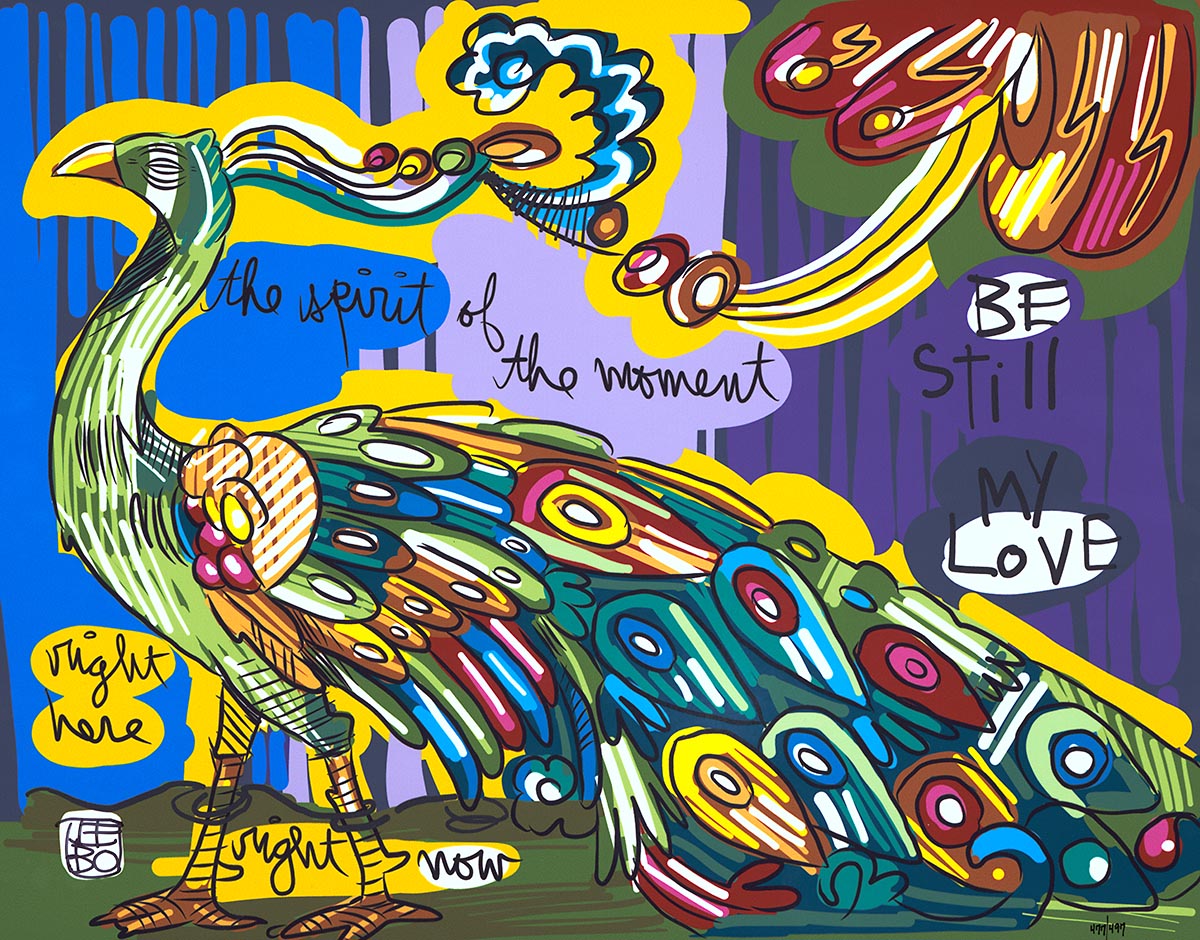 “Be Still My Love,” Lebo

LEBO: A lot of my work deals with the micro and the macro and showing the relationship between opposite things. The text on the right side presents you with two opposing ideas—”be still” and “let’s watch the mystery unfold.” It reads like a comic strip. That idea of “unfolding” is important. We see a hibiscus flower and a peacock—two living things that open up into something beautiful. The peacock’s feathers bridge the gap, acting as a wave pattern connecting the bird and the flower. At the bottom, we read “the spirit of benevolence.” That wording—it’s part reminder, part affirmation—tapping into the Eastern ideas of the importance of benevolence and kindness. 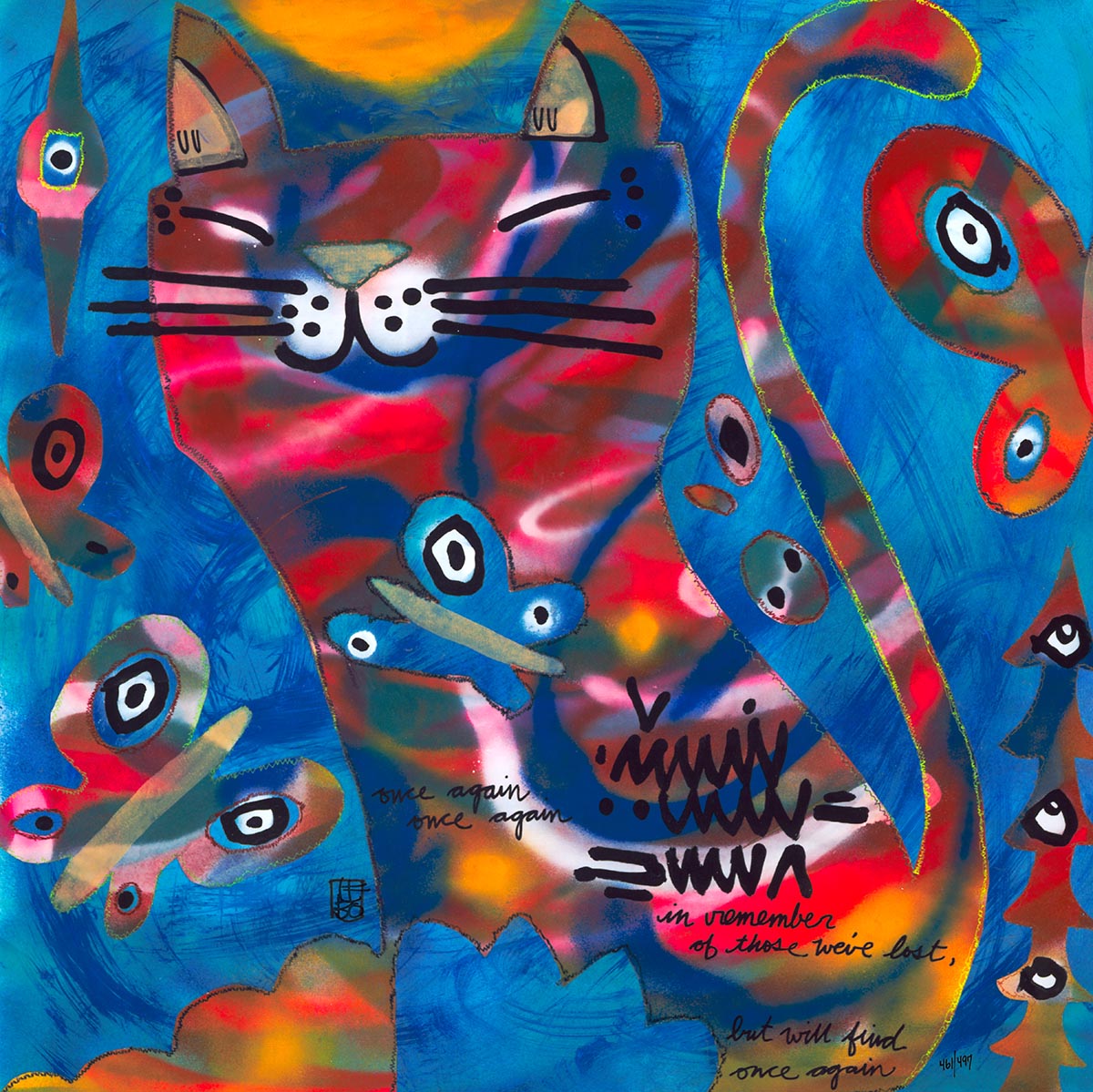 LEBO: There is this wonderful woman in my building. She’s in her mid-70s, and she’s a seamstress. I became intrigued by the idea of collaborating with her on a new work. I like creating things that you wouldn’t normally find in traditional art circles. So I painted and drew across a canvas, and she cut the canvas into pieces and sewed them back together into something new.  The whole work plays with time and the sequence of time. The phrase “once again” is repeated in a playful nod to this. The text “in remembrance” alludes to eternal renewal—things are in constant transformation. The central protagonist, the cat, blends into the background, creating a contrast between negative and positive that is very Taoist in tone. We also have the butterflies, which speak to metamorphosis and change in a very hopeful way.

YOU AND ME ETERNALLY 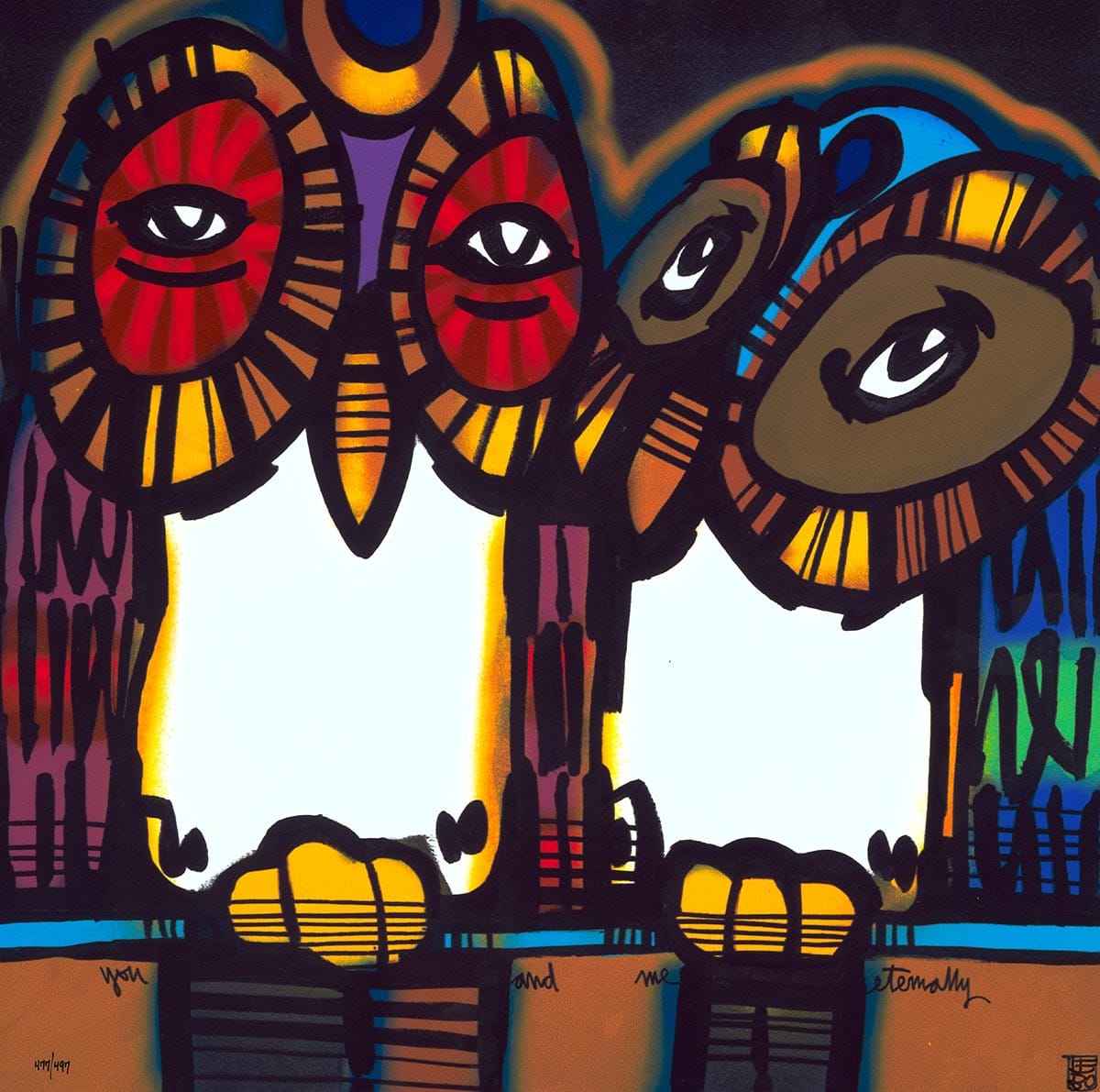 “You and Me Eternally”

LEBO: Over the years, I’ve written several small poetic verses, but that simple phrase—“You and me eternally”—it’s as near to perfect as I’ll ever get. There is just this cadence to it. It’s a simple, perfect emotion. It’s a phrase that makes me think about my fiancé. The energy we share goes far beyond whatever we know. It stretches out into eternity. This composition illuminates that verse with these two figures. They’re almost abstracted. They’re individuals, but they also bleed into each other. They have come together as one, and their narrative and their beings are now conjoined forever.

THIS IS A HOLY PLACE 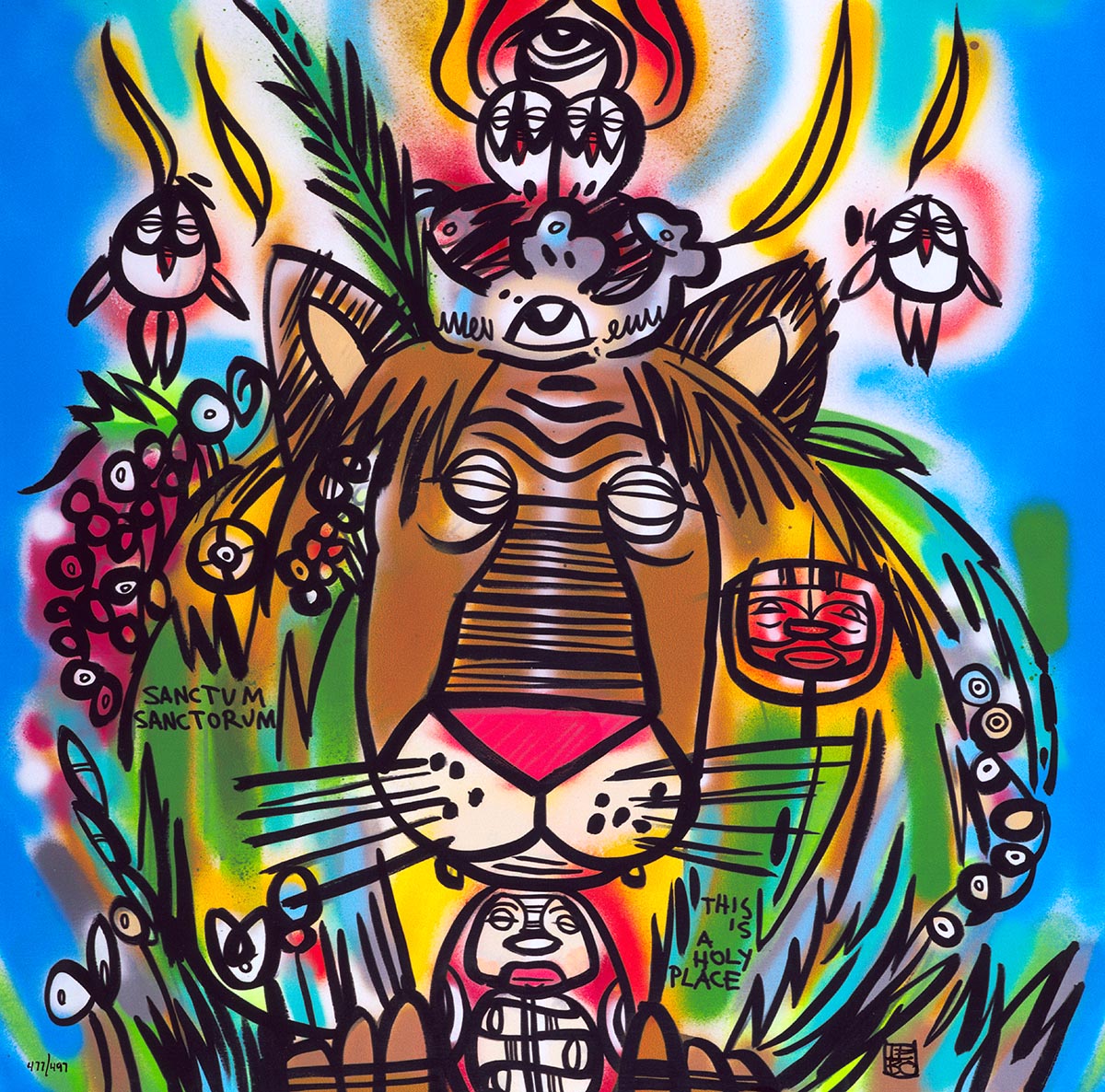 “This is a Holy Place”

LEBO: In the lion’s mane, you’ll see the words “sanctum sanctorum,” which, in Latin, means “holiest of holy places.” In a temple or a church, there’s usually some kind of tabernacle or alter that acts as a holy place even within that holy place. Here, the lion serves as a temple and, just below, the crux of the piece is a small daruma doll, a traditional Japanese doll modeled after Bodhidharma, the founder of Zen Buddhism. The lion and the doll represent the micro and the macro. We see the doll in meditation as the lion wears a crown, with rays of light shooting out. The two become united as one. This work draws together symbology from different traditions—Mayan art, Buddhist art, the birds evoke Audubon art. Using those symbols and figures from different traditions, it allows you to reiterate a concept in multiple different languages, which I think is a really intriguing idea. 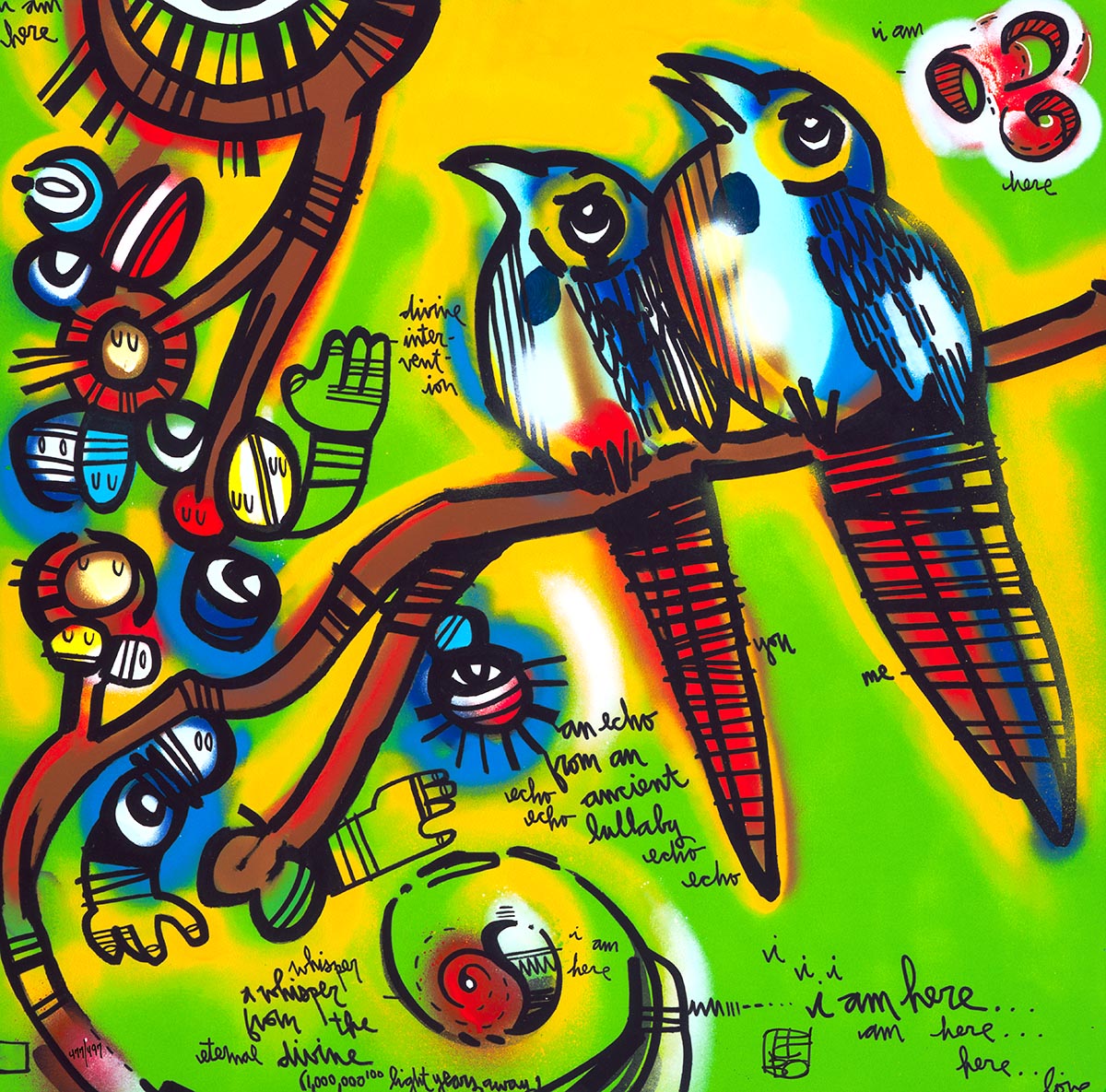 LEBO: I am hugely interested in ancient alchemy, the merging of the scientific process in pursuit of understanding the physical and metaphysical world. It’s the root of many countless sources of knowledge throughout history. In a work like this, I’m reminded of the Nikola Tesla quote, “If you wish to understand the universe, think of energy, frequency, and vibration.” With that in mind, we can better understand the narrative of the painting. The branch in this composition is like a wave of energy. It moves up, down, it oscillates—the whole work is bathed in light. Across the composition, you see the words “I Am Here,” almost like an affirmation. It can be interpreted in many different ways. You can see it as an acknowledgement of consciousness or as God or a spiritual force asserting its presence. The two birds are labeled “you” and “me,” leaving the nature of their relationship up to the viewer. They can be in love, they could be siblings. It allows for a different interpretation by everyone who views the work. The left side of the painting is very abstract Expressionist in style. Again, it’s open to interpretation and fusing qualities of the past with the present.

TODAY IS THE DAY

“Today is the Day”

LEBO: As I get older and more experienced, I find that it’s a true challenge to create something minimal. Something very direct and focused that can still be open to a lot of interpretations. The phrase “Today is the day” can be interpreted a variety of ways. It brings to mind the idea of time—of the past, present, and future together. It challenges us to stay in the moment and accept that there is no better time than now. The Fibonacci sequence is another very important motif in my work and, throughout this composition, there are these spirals working through everything. It has an almost psychological effect on the viewer and makes their eyes dance around the image.

LEBO: I come from a family of four—myself, my mom, my dad, and my brother. A work like this allows me to create a family portrait in a way that I find interesting. You have the four figures grouped together, which creates a design and narrative element that takes you through the composition. Similar to some of my other works, they’re sitting in a line and that constructs this wave or frequency across the image. This parliament of owls is joined together in harmony. There’s also a great metaphoric aspect to owls. They can see in the dark, they act as lights in the darkness. That married with the diffused light source behind them really creates this abstract contrast between sun and night.

LEBO: I am a big student of history, and I’ve read a lot about the Roman Empire and how the Romans approached war. Their war machine was so huge and so crucial to their civilization, but they never allowed it to enter the city of Rome. Instead, when the Roman armies would return from battle, they would lay their arms down in the Field of Mars outside the city and join a long procession into Rome. At the end of the procession, they’d have their general and, behind him, they would have a slave holding a purple laurel over his head. As they marched, the slave would whisper into the general’s ear: “All glory fades.” I find that very moving, so, in this work, I have this owl perched on that laurel. It’s a reminder to not forget who you are. Even with all our strength and might, ultimately, we have to embrace our dharma and surrender to the metaphysical. The infinity symbol above the owl’s head helps bring that idea to life.

If you’re interested in collecting the art of Lebo, contact our gallery consultants at (800) 521-9654 ext. 4 or sales@parkwestgallery.com. 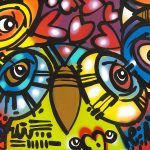 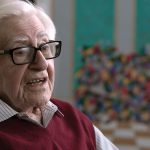