When Billy Joel performed to a sold-out crowd at Miami’s American Airlines Arena on January 31, arena representatives knew just the artist to tap for commemorating the experience.

Park West Gallery artist David “Lebo” Le Batard was commissioned by American Airlines Arena to present a gift to Joel as a thank you for the music he has given over the years.

Since the release of his classic “Piano Man” in 1973, Joel has become the sixth best-selling recording artist and third best-selling solo artist in the United States. He has had Top 40 hits in the 1970s, ‘80s and ‘90s and has won six Grammy Awards.

Lebo, known for his self-described “Post-Modern Cartoon Expressionism” art style, kept in mind the musician’s instrument of choice when creating his painting. In it, the Miami-based artist depicts a piano player strumming a swirl of keys, using a palette of red, green, and blue hues.

“As far as pop culture icons are concerned, Billy Joel is high on the list,” Lebo said. “That and his catalog of amazing music is why I was so excited to be commissioned to create a painting for him. After working so many years doing live paintings, it was a real high point to create something for the piano man.” Music has played an important role in Lebo’s artwork and career, whether it’s listening to it while painting (live or recorded) or doing live paintings alongside acts like the Beastie Boys and Willie Nelson. Lebo even served as the official artist for the 2003 Latin Grammy Awards.

He has artwork featured in collections like the National Academy of Recording Arts and Sciences, Sony Music Entertainment, Universal Republic and Gibson Guitar Corp. In fact, the Miami arena where Joel performed is graced by Lebo’s artwork, as he was commissioned to paint the 400 level of the venue.

Joel’s two-plus hour concert on January 31 was hailed as “a perfect concert, built on perfect pop songs” by the Miami New Times. Joel led the show with “Miami 2017 (Seen the Lights Go Out on Broadway),” getting a roar from the Florida crowd. Read more about the performance here. 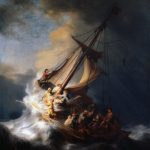 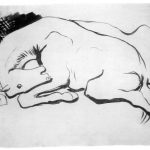