“I have a dream that one day this nation will rise up
and live out the true meaning of its creed:
‘We hold these truths to be self-evident:
that all men are created equal.’”

In honor of Martin Luther King, Jr. Day (observed this year on Monday, January 18), Park West Gallery would like to share, in part, a noteworthy article published today by the South Florida Times.

The author of the article entitled, “Rockwell painted civil rights portraits, too,” challenges the popular belief that legendary illustrator and storyteller Norman Rockwell ignored racial and social issues, depicting only a narrow ethnic view of the white upper class. The article argues that although at times Rockwell was constrained by editorial guidelines, the artist was, in reality, very socially concerned and a genuine supporter of the Civil Rights Movement.

FORT LAUDERDALE — One of the most beloved American artists of the 20th century, [Norman] Rockwell worked at the [Saturday Evening] Post for 47 years, drawing images that would be reprinted as the news magazine’s cover. Because the Post’s subscribers were largely well-to-do whites, Rockwell was constrained there to narrative paintings of the everyday lives of ordinary white people. The magazine required that black people only be seen in service positions.

After leaving the Post in 1963 Rockwell diverted from his familiar themes of family, friendship and community in societal bliss, and started to illustrate current events for Look magazine. Inspired by the Civil Rights Movement, his first illustration for Look, published in January 1964, was The Problem We All Live With, based on the real-life story of Ruby Bridges, a six-year-old girl who, in 1960, became the first African-American child to attend an all-white school in New Orleans. It was not the sort of work expected from Rockwell, who went from idealism to realism.

“Here was a man that had been doing lots of work, painting family images,
and all of a sudden decided
this is what I’m going to do…
it’s wrong,
and I’m going to say that it’s wrong…
the mere fact that [Norman Rockwell] had enough courage to step up to the plate
and say I’m going to make a statement,
and he did it in a very powerful way…
even though I had not had an opportunity to meet him,
I commend him for that.”

In the painting, a little black girl dressed in white is escorted on her first day to school by four faceless U.S. Marshals, the wall behind them defaced with the N-word and the messy red gush of a tomato that someone threw at her. Rockwell was a member of the early NAACP, long before he began this painting, and even wrote a $1,000 check to the movement in the 1950s, according to Laurie Norton Moffatt, director and CEO of the Norman Rockwell Museum.

“He was very socially concerned, but he wasn’t able to paint that in the Post because of editorial policies,” Moffatt said. “I think it was very liberating for him as well to be able to paint on a wider spectrum of subjects, and was particularly able to create a bridge for people to see the unfairness, the anger, the meanness, and the injustices that were happening to our children all over the United States…” 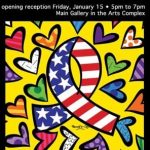 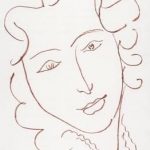