“I thought the entire event was thrilling. Park West Gallery’s 40th anniversary event was the ‘cherry on the sundae ice cream.’

It was great fun watching the artists arrive and seeing everyone cheer them on. Marcus Glenn’s arrival in his red viper was hilarious, he is such an engaging personality. I found Jean-Claude Picot’s arrival very touching, even though he had a translator, his emotions came through his actions. I thought it was very sweet when he kissed people in the audience on both cheeks. Gockel made a stunning arrival dressed in white with everyone shouting his name.

All of the artists were spectacular and it was great to hear their speeches in support of Park West. But the speech that moved me to tears was Albert’s…I felt a chill go up my spine to see and feel such dedication and belief in Park West. He made a believer out of me too.” —C.B.

“I’m always continually amazed by how warm, gracious, and friendly our artists are. They seem to truly share their excitement and enthusiasm for artwork with everyone around them!” —L.W.

“Our own Morris Shapiro warmed up the crowd in anticipation of what was to come. But you had to be there to believe it. Lights, cameras and action – on the red carpet Tarkay, Agam, Krasnyansky, Fanch, Picot, Simon Bull, Marcus Glenn, Linda Le Kinff, Scott Jacobs, Andrew Bone, Tim Yanke and the list goes on. All in one place at one time, will it ever happen again? Not in the same way.

It was a privilege to be able to experience the excitement and energy that exploded that day. Thunderous cheers, Gockel, Gockel, Gockel. Did we glimpse Marcus Glenn trying to steal the show? Driving up to the red carpet in a Viper? Well it seems so, Marcus Glenn can get away with about anything, the cheers went up, the roar was thunderous (the crowd, not the car), mic in hand he gives us more than wonderful art, his wit, charm and intoxicating personality.

Working at Park West is a joy, not only do you work with great people, from time to time you get to mingle with the who’s who of the art world. Park West artists are always willing to share a story, sign an autograph or pose for a picture. It’s more than just art; it’s being a part of the Park West family.” —M.C.

“The 40th anniversary event was very exciting to actually see some of the artists up close and associate them with their artwork. And it was interesting to hear from the artists regarding how they create their artwork. Overall it was a great experience I’m glad I got a chance be apart of the event!” —P.J.

“Park West Gallery’s 40th Anniversary was amazing, vibrant and full of life. I wouldn’t have missed it for the world!” —L.M. 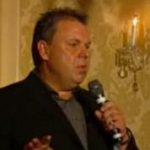