Behind the Artist: Anatole Krasnyansky 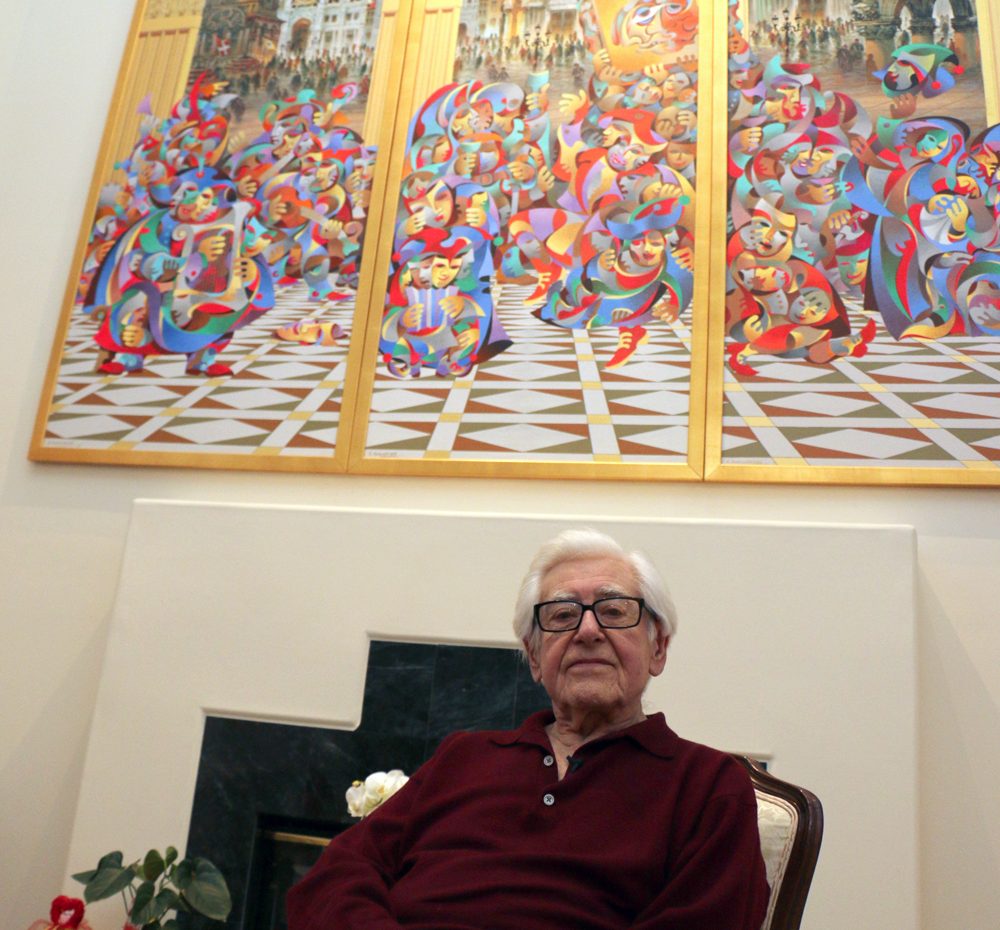 Anatole Krasnyansky in his home in California.

Trained as an architect, Anatole Krasnyansky alternates between painting rich, expressive cityscapes and exaggerated Cubist figures. His contrasting styles are driven and enriched by the cultural dichotomy between his early life in the former Soviet Union and his later life in the United States.

Krasnyansky was born in Kiev, Ukraine. Krasnyansky and his mother fled the invading German army in 1941 by escaping to Stalingrad (now Volgograd), then later to Tashkent, Uzbekistan, where Krasnyansky graduated from high school in 1947.

That same year, Krasnyansky returned to Kiev. He studied architectural restoration at the School of Architecture at the Kiev State Art Institute (now the Ukraine State Art Academy) as well as at the Leningrad Academy of Art. Highlights of his architectural career include working on the restoration of such Russian treasures as Potemkin’s Palace, the Marble Palace, and the Hermitage Museum.

His personal and educational background would influence the evolution of his art style throughout several distinct periods in his career.

It’s not surprising that Krasnyansky’s earliest paintings were inspired by his training in architecture, art history, and restoration.

In the stimulating environment of academia, the artists and architects in Kiev and Leningrad commonly exchanged ideas and exhibited insights in painting, drawing, and the history of art and architecture.

This hands-on work in art history and design fueled the artist’s great admiration for historic buildings and Russia’s architectural heritage. However, Krasnyansky’s true vocation was art. 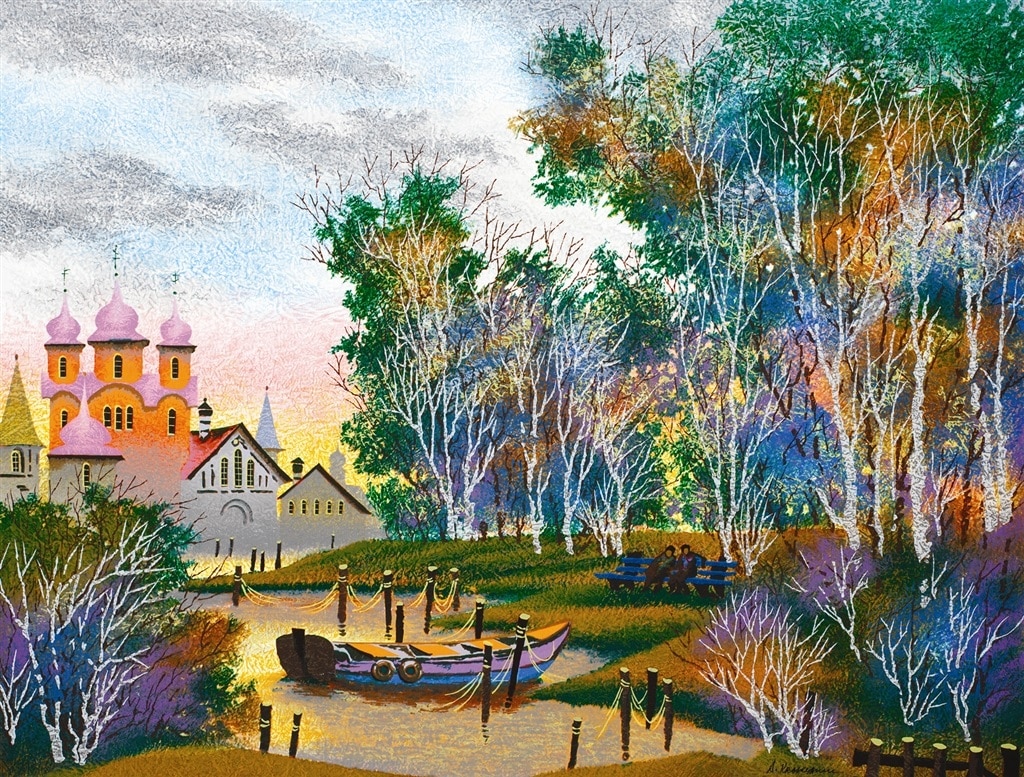 He created numerous drawings and watercolors between projects and during his travels. Working in the traditional style of European realism, Krasnyansky interpreted the historic architecture of his homeland in an evocative series of watercolor and acrylic paintings.

These cityscapes are the hallmarks of Krasnyansky’s early artistic style. While the bulk of his output during this period focused on Russian architecture, he also captured beautifully expressive street scenes from Germany, France, and other countries. In each work, he utilizes his architectural eye to show the underappreciated beauty of buildings and remind viewers to never forget the past.

Krasnyansky’s cityscapes reveal his deep experience as a draftsman, his brilliance as an architect, and his facile command of the unforgiving technique of watercolor. 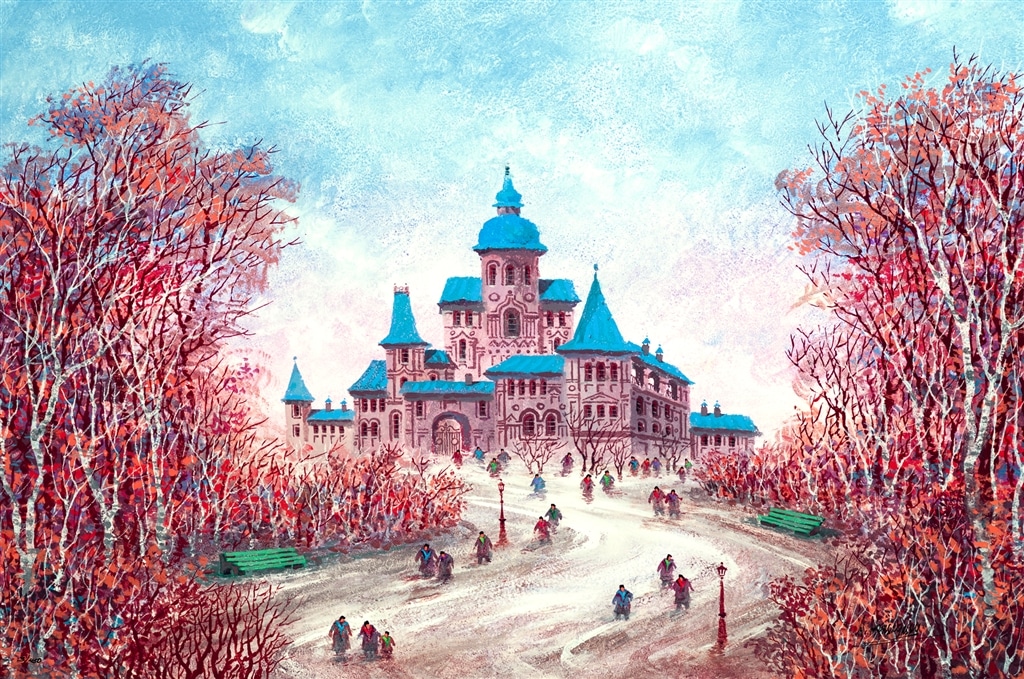 In 1975, Krasnyansky moved his family from the Soviet Union to the United States. His awareness of the interdependence of architecture, sculpture, painting, and applied art would shape his career in his adopted country. Drawing on his architectural training, Krasnyansky became a background artist and set designer for several major television and movie studios, including ABC, CBS, and Universal Studios.

In 1981, while working on a special for ABC-TV, Krasnyansky encountered the rock band KISS. The rock group was notorious for its iconic face paint, elaborate costumes, and intense rock performances involving pyrotechnics, smoke, and flashing lights.

Nothing in Krasnyansky’s classical Eastern European training could prepare him for the sensory overload and culture shock he experienced while watching the band for the first time.

After experiencing the group’s performance, Krasnyansky needed to purge the distress and anger he felt but found his traditional artistic style could not properly convey his feelings. The artist eventually adopted a surreal and Baroque style, shifting his focus from structures to figures—kinetic, vital figures hiding their humanity behind masks, just like the rock band. 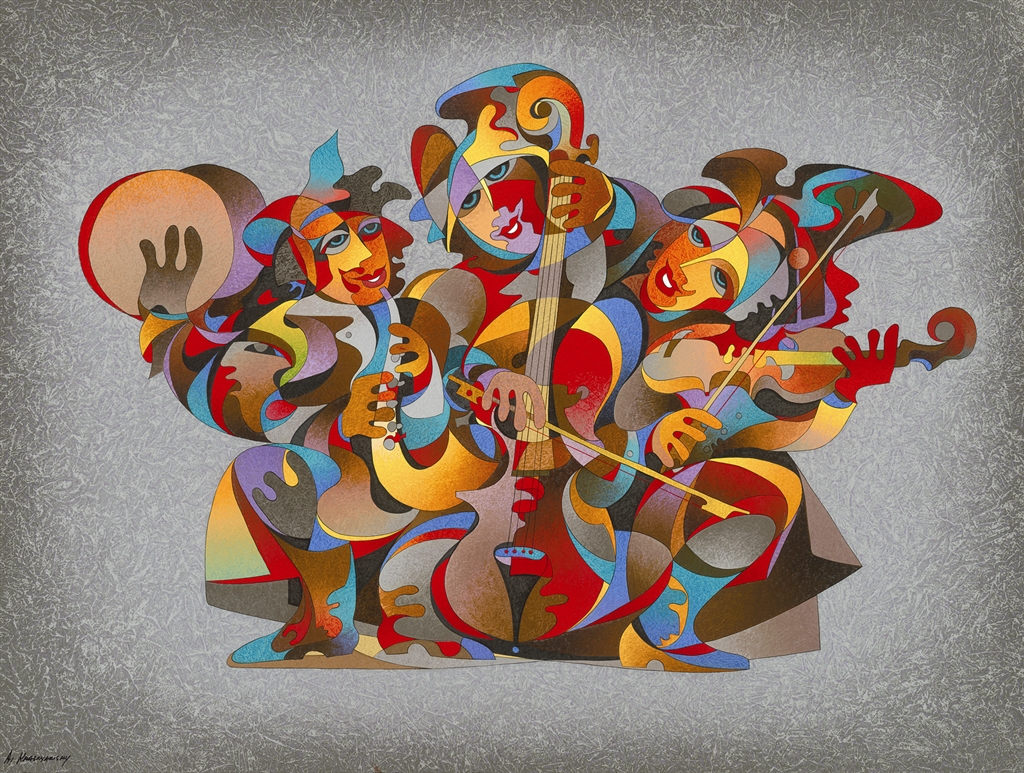 Krasnyansky developed this new style further by combining the structural aspects of his architectural background with vibrant, visual energy and bright colors. His figures evolved from monstrous beings to playful jesters donning masks and whimsical expressions. 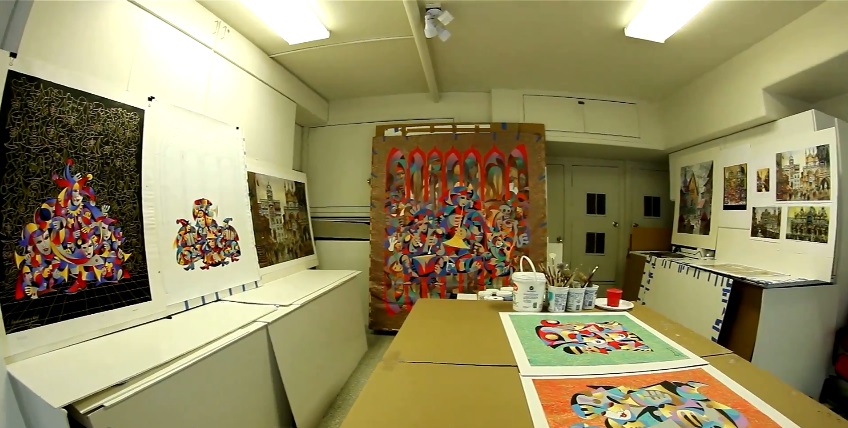 Krasnyansky’s surreal figures retain their musical origins, often depicted with string instruments, horns, or accordions. Combined with Krasnyansky’s introduction of texture with handmade paper, the figures practically vibrate off the canvas with life and music.

Krasnyansky has also sought ways of fusing the two predominant styles of his art into unique conceptions. These works display his figures inside architectural interiors with lavish cityscapes seen from the windows or figures flying above complex architectural structures.

Most recently, he has begun to populate interiors with modeled figures (akin to the notion of sculpture) in various poses with elaborate vistas of architectural designs in the distance. 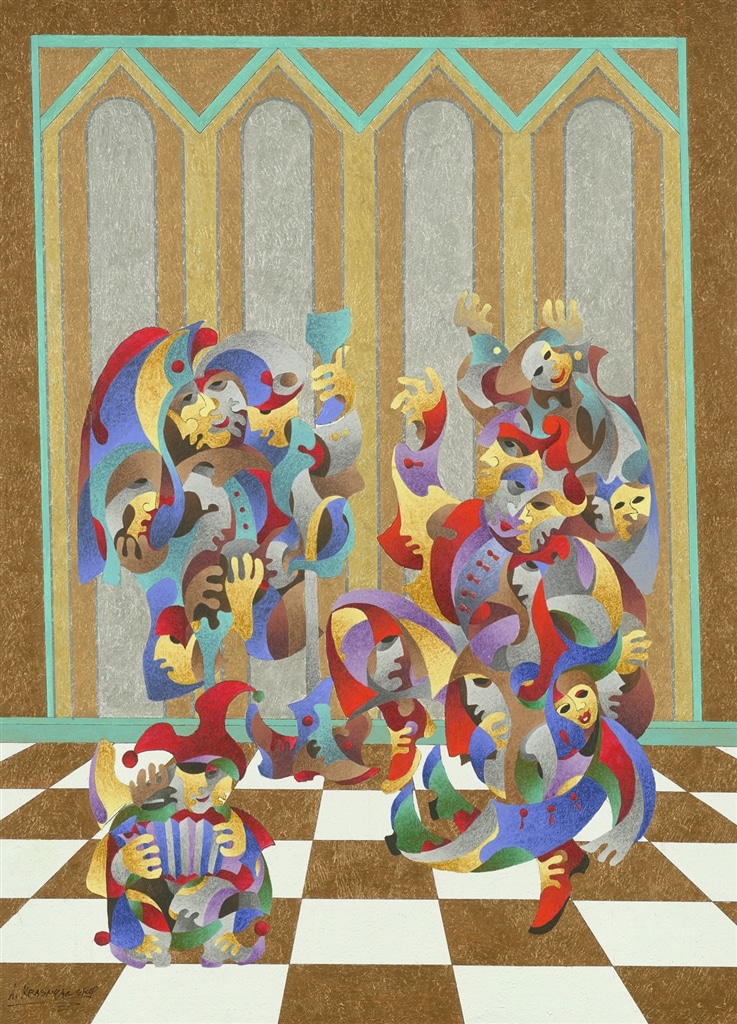 “Swaying to the Music” (2015), Anatole Krasnyansky

Today, Krasnyansky’s works—both his cityscapes and expressive Surrealist figures—have been exhibited around the world. Krasnyansky also designed the Greco-Roman façade for Park West Gallery’s headquarters in Southfield, Michigan, in 2001.

An exhaustive catalog raisonné of Krasnyansky’s body of work was published in the book “Krasnyansky” in 2013. The book chronicles Krasnyansky’s life and artwork, features hundreds of images, and includes original commentary from the artist, Eleanor M. Hight, Ph.D., and Morris Shapiro, Gallery Director, Park West Gallery. 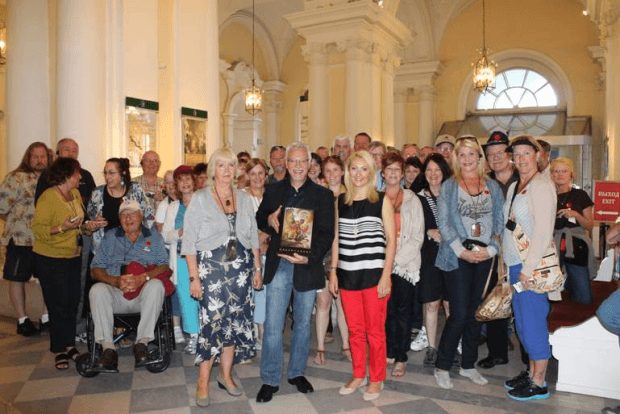 Morris Shapiro, Park West Gallery Director (center), presents a copy of the book “Krasnyansky” to the Hermitage Museum in St. Petersburg, Russia. He is joined by the Hermitage’s Lidia Komissarova, Administrator (left), and Svetlana Suprun, Head Administrator (right), and a group of Park West collectors.

For more information about Anatole Krasnyansky or to collect his art, attend one of our exciting online auctions or contact our gallery consultants at (800) 521-9654 ext. 4 during business hours or sales@parkwestgallery.com. 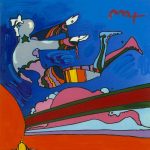 The Cosmic Art of Peter Max: How It Captivated an Entire GenerationArt & Gallery News, Peter Max 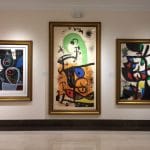