Walfrido is best known for being a prominent, groundbreaking figure in contemporary seascape art. In addition to his traditional ocean scenes, his trailblazing works include his Koa wood collection, his surfboard art, series like his “Fire and Fantasy” collection, and his collaborations with Walt Disney Studios. His artwork can be found in major galleries and private collections around the world. 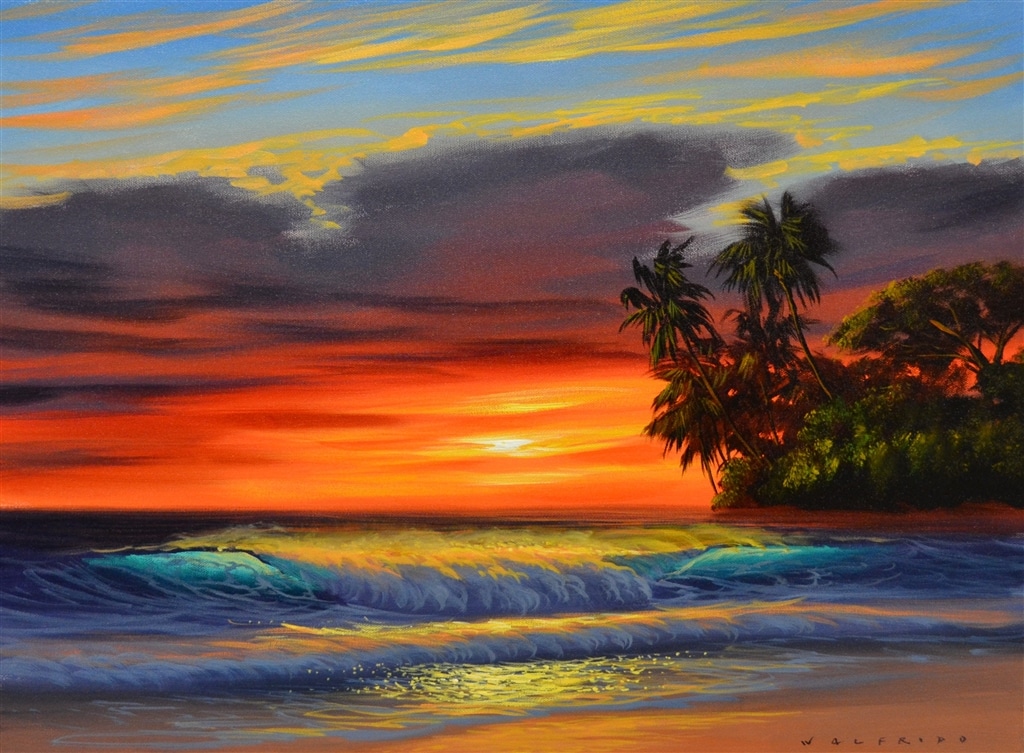 “Fire on the Shores”

Walfrido, son of renowned artist Edgardo F. Garcia, was born in the Philippines in 1966. As a second-generation artist, his story begins with his father. Facing difficult times and lack of opportunity, Edgardo left his homeland to pursue a better life for himself and his family. Three years later, he was reunited with his five kids in a small town outside of Los Angeles called Victorville. They moved to the San Francisco Bay Area in 1973 seeking the “American Dream.”

Watching his father teach art and paint made Walfrido eager to follow in his footsteps. He drew everything from airplanes to comic strip characters to develop his hand-eye coordination. By the age of 14, his father took him under his wing and taught him all of the Old Masters secrets. 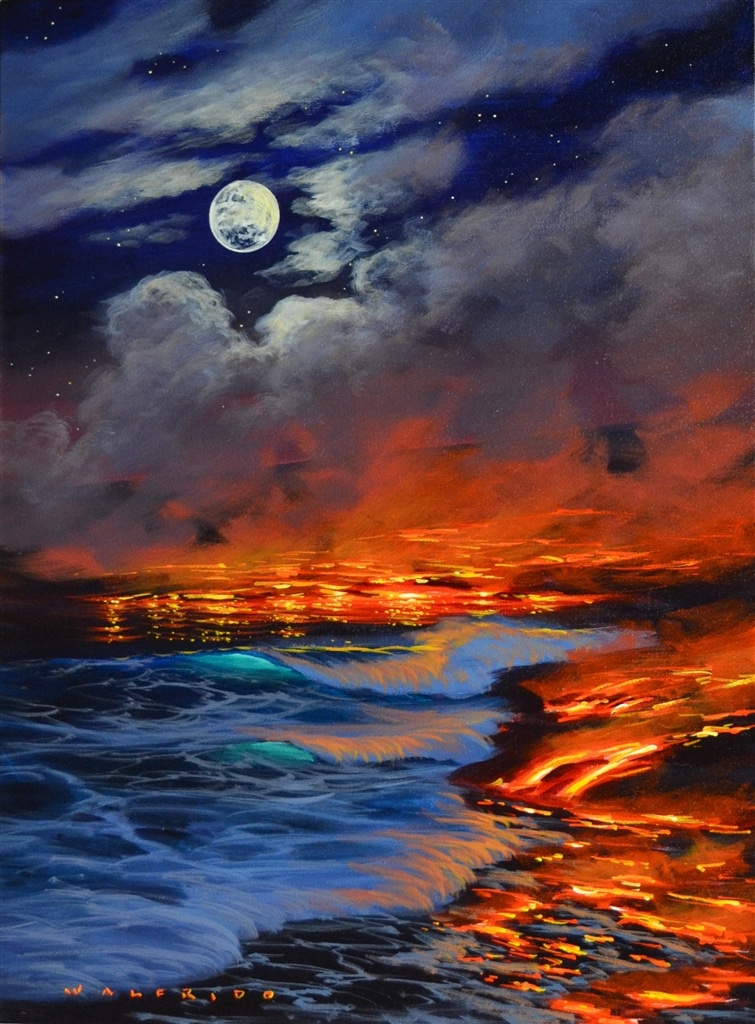 Walfrido’s love for painting came hand-in-hand with his love for surfing. By the time he was 17, he was teaching his own art classes, hanging his art in Carmel galleries, and taking art classes full time at Ohlone College in Fremont, California.

In 1987, while on vacation in Hawaii, he found representation by a gallery on Oahu. From there, his work attracted the attention of local and international art buyers. Walfrido continued to paint, teaching private art lessons and studying art at San Jose State University.

His paintings eventually caught the eye of Wyland, the world’s leading environmental artist. In 1991, at the age of 23, he became the youngest artist to display his art in the Wyland galleries. Since then Walfrido’s art has graced the walls of art galleries and collectors’ homes across the United States and abroad. 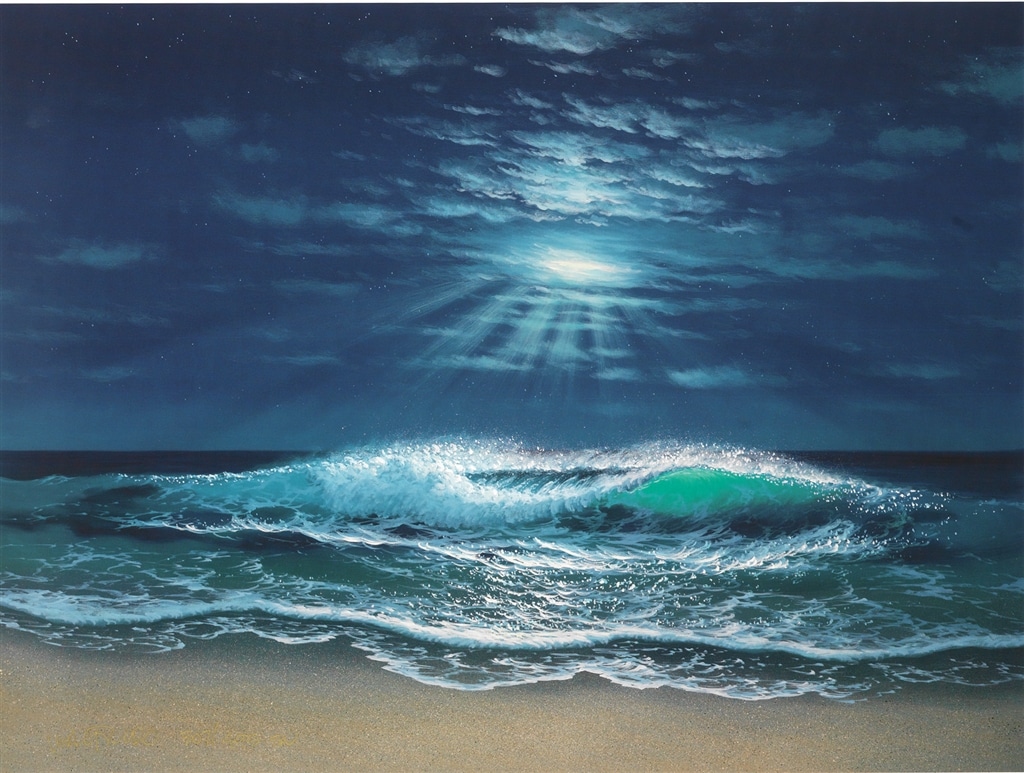 Walfrido’s style can be described as “Romantic Luminism”—his artwork goes beyond just imitating photographs of nature and instead adds a sense of timeless perfection to his subjects.

Each painting starts out as a loose impressionistic idea. As the layers of paint are added, the details come out. By the time the highlights are done, the painting glows with light reminiscent of the Old Masters. From up close, you can see the rhythm of his brushstrokes, but, when you take a step back, the eye blends them all into a harmonious tapestry of light, color, and texture. 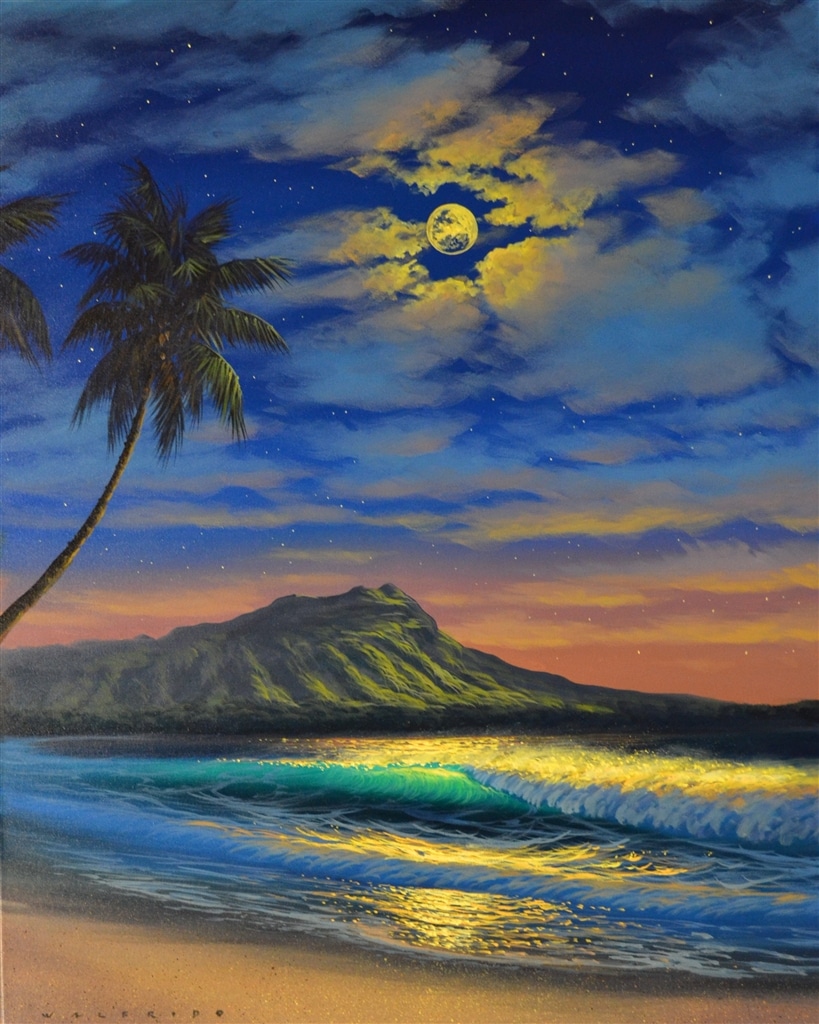 Using photographs, videos, and painting on site gives Walfrido endless subjects to paint, but it is his imagination that unlocks the key to his style. Each painting plays upon the quality of light—whether it is a romantic moonlight, a brilliant sunset, the sea caves of Kauai, or the awe-inspiring glow of his signature “Lavascapes.” It is as if each canvas is alive with the brilliant light of nature coming from within.

In addition being a full time painter, Walfrido’s credits include being T.V. producer of his own art show “Art Made Easy,” which has been awarded “Best Art Show” in the islands over the local channels.

Walfrido’s greatest sense of accomplishment comes from being a father of two, a husband, and his ability to bring people’s spirit closer to the light with his art. With over 40 years of painting experience behind him, Walfrido is considered to be one of the most distinguished seascape artists today.

Meet Walfrido: Our Exclusive Interview with the Seascape Artist

In his youth, the artist Walfrido was lucky enough to find the ideal artistic mentor—his father. A second-generation artist, Walfrido is the son of acclaimed artist Edgardo F. Garcia and, under [...]