Renowned contemporary artist Jeff Albrecht has made a splash in the art world through his energetic style and bold hue choices. Inspired by the colors, drips, and splatters of the modern masters, Albrecht has been producing original artwork in his “Extreme Colorist” style for clients and private collectors for over 25 years.

Albrecht’s interest in art began at a young age with simple doodles during class. When his friends began to notice his natural talent, Albrecht began getting requests from local parents to create logos for their family businesses. Albrecht continued to develop his artistic skills through high school where he sold his very first painting in his junior year.

After getting an art degree from San Jose State University, Albrecht moved back to his hometown of Freemont, California with his wife and pivoted to a career in sales. He was well-known around town for his artistic talent, however, and his new career didn’t last long. Albrecht soon started receiving calls from his alma mater, his old high school in the same district where his wife anow teaches, about an open position as an art teacher. 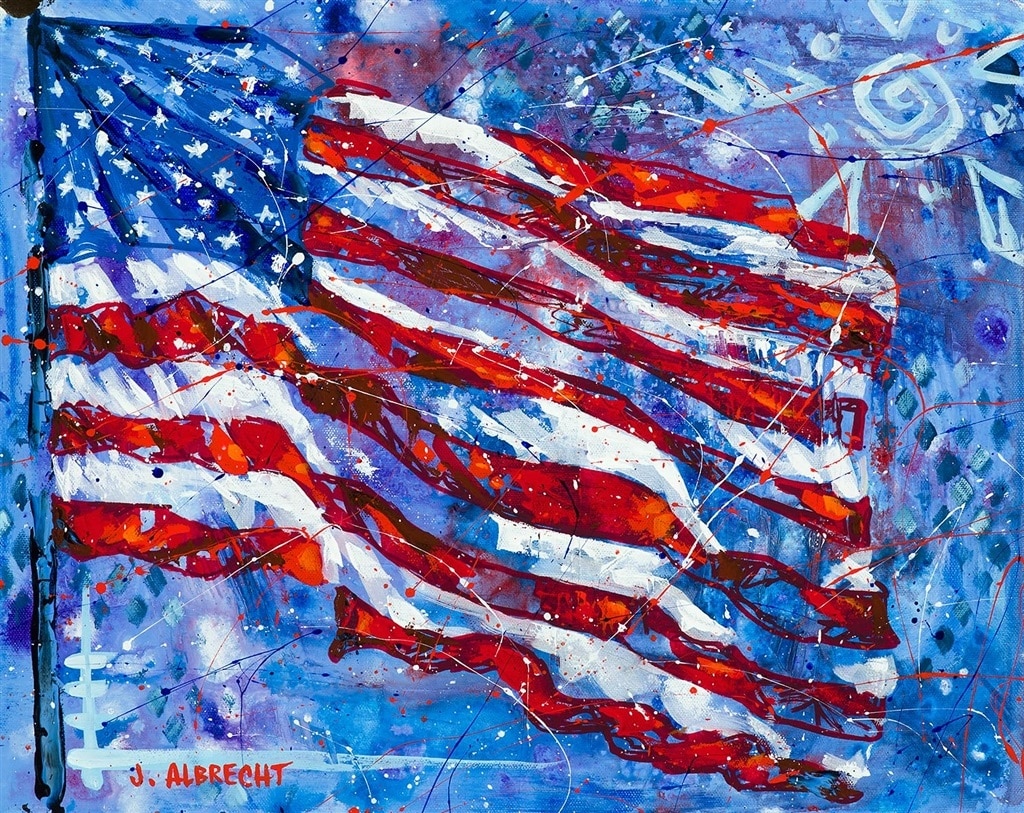 “They called so many times and I wasn’t fulfilled in sales so I thought maybe that’s what I am supposed to do. Go and teach,” said Albrecht. He eventually decided to follow his heart and pursue a career in teaching, passing his artistic ability down to the next generation of artists. He devoted the rest of his time to becoming a professional studio artist and soon began to gain recognition from galleries all around the country.

Today, Albrecht’s “Extreme Colorist” artwork can be found in the collections of professional athletes, musicians, celebrities, galleries, and private collectors around the world. 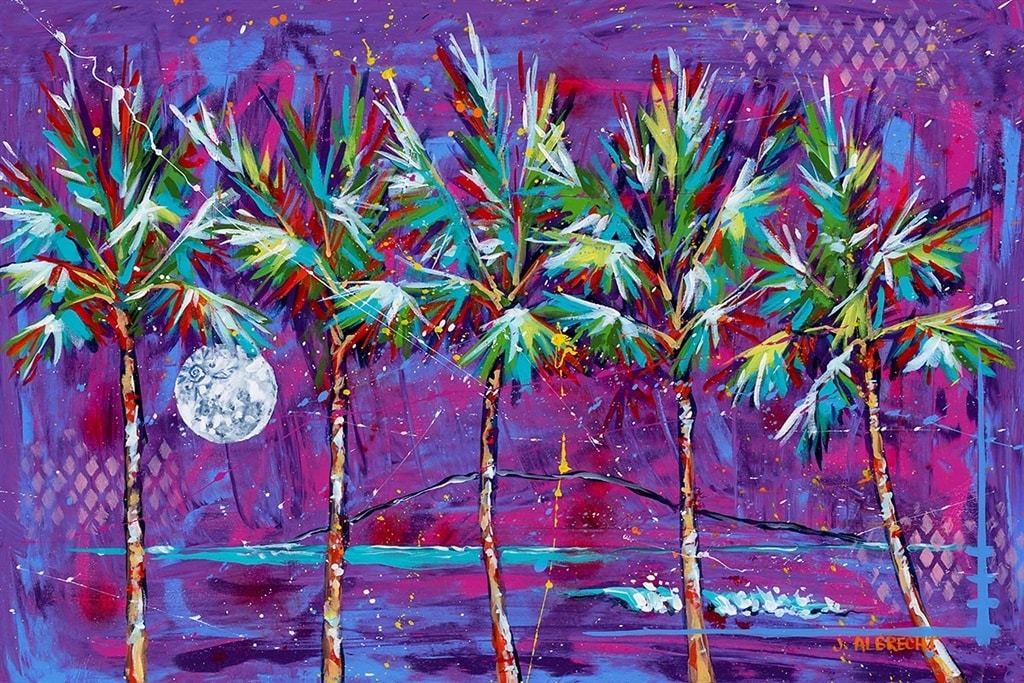 He has also helped raise awareness and financial support for several foundations and charities with his paintings, making a difference in both local and global communities. Albrecht has worked with the NFL’s San Francisco 49ers, the NHL’s San Jose Sharks, the Soul Surfer’s Friends of Bethany, and the Pacific Whale Foundation, among other organizations. He is also the only artist in the world who collaborates with the Maui Ocean Center, which is Maui’s top-rated attraction.

Albrecht still teaches ceramics at the same California high school where he developed his own artistic ability and lives in Hawaii during the summer months. He jokes that his co-workers and students have no idea that he has an art career outside of teaching. He said, “I don’t take for granted the fact that I’m able to make a living by focusing on my passions and spending time with the people that I love… I feel like the luckiest man alive.”

A self-described “Extreme Colorist,” Albrecht’s use of color and line has been influenced by the work of Pablo Picasso, Peter Max, LeRoy Neman, and David Park. The energy in his paintings moves viewers through a range of uplifting emotions. His playful use of bold color and enigmatic symbols allow his paintings to pulse with excitement, creating a positive atmosphere in any setting. 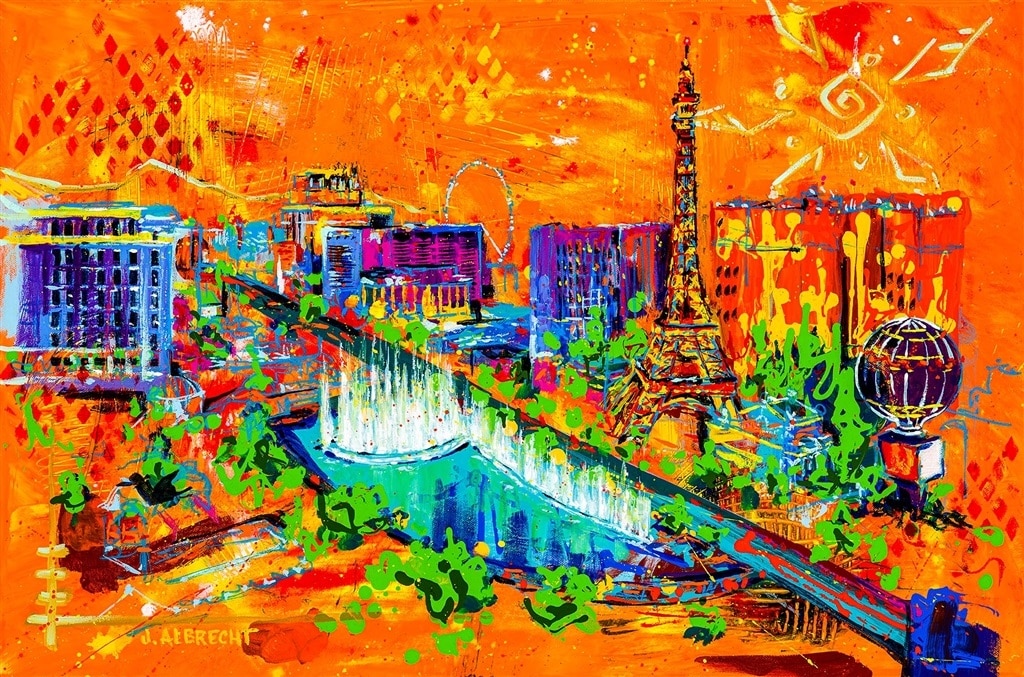 Albrecht said, “I like to focus on the negative space surrounding my subjects. This is an area that I can push, pull, slide, or stamp paint through in order to balance the composition.”

The connection Albrecht feels with his collectors is another great inspiration in his work. According to him, “My inspiration has always come from relationships. Might sound cheesy, but it’s true. I’d love to see which piece connects us, and where it rests in its current home.”

To collect the art of Jeff Albrecht, you can contact our gallery consultants at (800) 521-9654 ext. 4 or sales@parkwestgallery.com.

Thanks to his unique “Extreme Colorist” style, artist Jeff Albrecht has flourished in the contemporary fine art world for over 25 years. Albrecht has deep roots in his hometown of Fremont, [...]