Through two distinct approaches to his art, Krasnyansky depicts expressive architecture and surreal figures to remind us to never forget the accomplishments of the world’s cultures and traditions.

Anatole Krasnyansky was born in Kiev, Ukraine. His father passed away in 1931 from leukemia, so he and his mother relied on the support of her brother. In 1941, Krasnyansky and his mother fled the invading German army by escaping to Stalingrad (now Volgograd), then later to Tashkent, Uzbekistan, where he graduated from high school in 1947.

That same year, Krasnyansky returned to Kiev. He studied architectural restoration at the School of Architecture program at the Kiev State Art Institute (now the Ukraine State Art Academy) as well as at the Leningrad Academy of Art, receiving his masters in architecture in 1953. 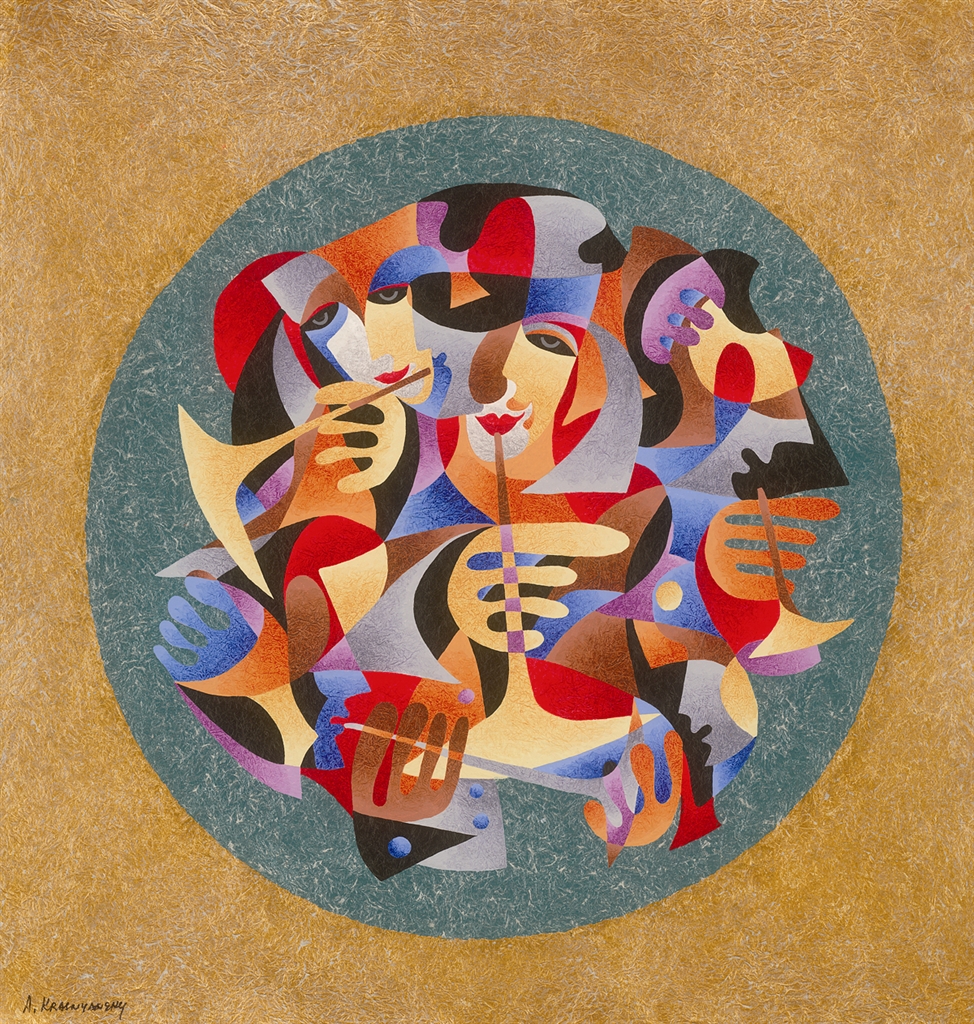 Krasnyansky worked on the restoration of the Potemkin Palace, the Marble Palace, and the Hermitage museum. While in the U.S.S.R., his skills were noticed by city officials, and he was asked to work on multiple prestigious projects. He designed the Central Medical Emergency Building and the Polytechnic Institute Subway Station, as well as hospitals, art pavilions, exhibition installations, and monuments.

Krasnyansky married Nelly Koshevatsky in 1957 and, in 1966, gave birth to their daughter, Rimma. In 1975, his family left the U.S.S.R. for the United States.

His awareness of the interdependence of architecture, sculpture, painting, and applied art would shape his career in his new country. Krasnyansky became a background artist and set designer for major television and movie studios, including ABC, CBS, and Universal Studios. 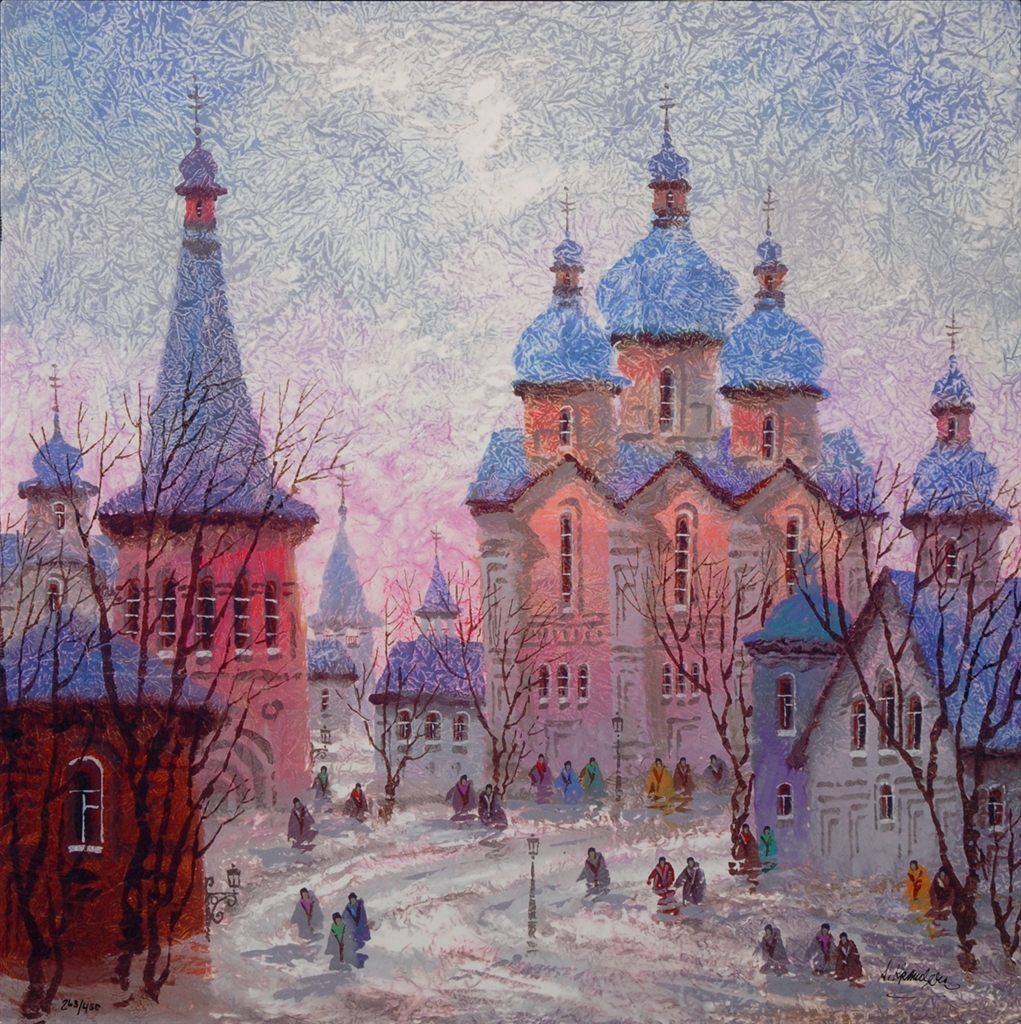 Krasnyansky received representation by the Dyansen Gallery from 1986 to 1993, then exclusively by Park West Gallery in 1994. Calling upon his architectural skills, Krasnyansky designed the Greco-Roman façade for Park West Gallery’s headquarters and exhibition space in Southfield, Michigan. He continues to work and reside in California.

As an artist, he elevated the watercolor medium to the expressive possibilities usually associated with oil painting. His innovative inclusion of paper texture into the creative process is a dynamic component of his art. He combines the precision of his watercolor technique with the expressive effects produced by highly textured rice paper.

Krasnyansky developed a naturalistic style during his years in Kiev, but his art moved toward the symbolic use of color—reminiscent of Impressionism and Expressionism—combined with the distortions of form in Cubism and Surrealism. 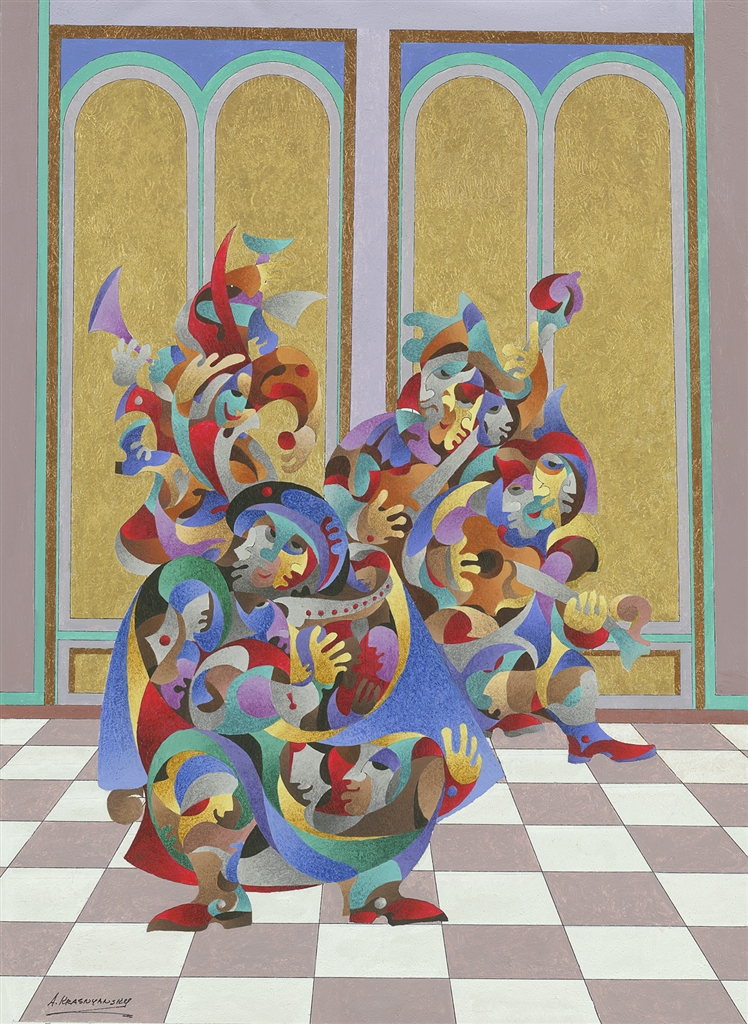 The artist’s modern, surreal style developed due to the information overload and experiences of his new life in the United States. In 1981, while working for ABC-TV, Krasnyansky worked on a set for the rock band KISS. The band’s live performance incorporated outlandish outfits, loud music, and harsh, flashing lights.

The performance shocked the classically-educated artist and architect. Krasnyansky was compelled to exorcize the emotions caused by the experience. It was then that the artist began incorporating surreal, masked characters into his paintings.

Krasnyansky approaches art with two different techniques. The first are his cityscapes, inspired by his art history and restoration background. His depictions of historic buildings and Russia’s architectural heritage are rich, free, and expressive. He uses his architectural background to show the underappreciated beauty of buildings and to remind viewers to never forget their pasts. 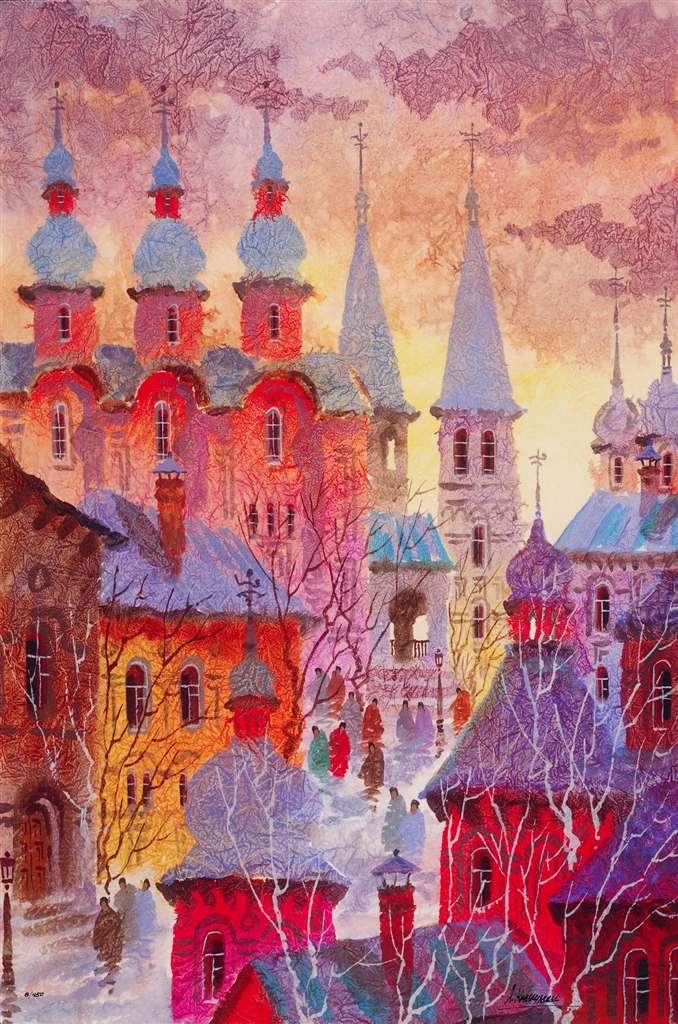 The artist’s second style is brighter and surreal, but never departs from the recognizable. His figures resemble harlequins, animated and joyous in presentation. These masked figures represent the idea that we all wear masks depending on our situations. We are only our true selves, Krasnyansky posits, when we are naked and alone.

Krasnyansky’s artwork is exhibited all over the world. In 2013, a fully-referenced catalog raisonné of the artist’s graphic works was published by Park West Gallery.

1975–76, Scenic Artist at ABC and CBS Television Studios. Credits include:

How 6 Artists Portray Our Year-End Winter Holidays Through Art

Now that it’s November, we’ve officially entered “the holiday season,” so prepare yourself for weeks of songs, decorations, and extensive preparations. Our year-end holidays have made such an [...]

There aren’t many artists still working at the age of 90, but Anatole Krasnyansky has never been a traditional artist. From his earliest days as a youth in Kiev, Krasnyansky distinguished himself [...]