Yaacov Agam was named one of the 100 people positively affecting the Jewish world by the Algemeiner newspaper.

The contributions of Park West Gallery artist Yaacov Agam to the art world and bettering Jewish life earned him a spot on the “Jewish 100” list.

The Algemeiner Journal unveiled its list of “Top 100 people positively influencing Jewish life” during its 2nd Annual Jewish 100 Gala, held Feb. 3 in New York City, naming Agam as one of its choices.

Algemeiner Publisher Simon Jacobson said the list is “to bring into focus the forces that are bettering the world of the Jewish people.” On the list are men and women of Jewish and non-Jewish backgrounds, including activists, rabbis, actors, writers and artists.

According to the article:

This list should not be seen as an endorsement of anyone or any entity and way of thinking; rather the people on this list are a reflection of the rich and broad spectrum of Jewish life – those who have positively contributed and helped shape Jewish life.

Among those in the “arts and culture” section is Agam, the “father of kinetic art.” The Algemeiner recognizes Agam as a world-renowned artist, saying he infuses his art with deep Jewish mystical meaning.

Among his accomplishments are having his work, “Faith – Visual Pray,” presented to Pope Francis I, and creating the world’s largest menorah, which is situated in New York City.

Agam, proud of his Jewish mystical ancestry and an innovative leader in kinetic art, pioneered a new form of art that stresses change and movement. His more representative work appears in public places worldwide, including prominent fountains in Paris and Tel Aviv, and his art is held in such collections as the Museum of Modern Art… Read More.

Agam joins other esteemed names like Steven Spielberg, Scarlett Johansson and Gal Gadot in his category. Other categories include academia, government, philanthropy, community and religion. See the full list here.

Park West Gallery founder and CEO Albert Scaglione has been Agam’s art dealer since 1974. Read about some of Scaglione’s memories and experiences with Agam here.

Park West Gallery congratulates Agam on this honor, and is proud to help bring his artwork to collectors all over the world. 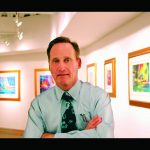 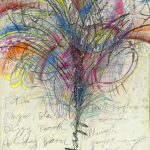