Posted December 9, 2014
In In the News
Princess Cruises pays tribute to “The Love Boat” during Regal Princess launch2014-12-092014-12-09https://www.parkwestgallery.com/wp-content/uploads/2018/02/pwg_site_logo_trimmed.pngPark West Galleryhttps://www.parkwestgallery.com/wp-content/uploads/2014/12/Regal-Princess-ceremony.jpg200px200px
0 A star-studded evening and a record-breaking number of champagne bottles helped celebrate the 50th anniversary of Princess Cruises.

The original cast of the iconic “The Love Boat” TV show and 25 of its past guest stars reunited on Nov. 5 at Port Everglades in Fort Lauderdale, Florida to christen and launch the new Regal Princess ship.

Princess Cruises served as the backdrop for “The Love Boat,” which originally aired Sept. 24, 1977. The show ran until 1987 and was one of the highest-rated shows on television. The show simultaneously introduced audiences to the world of modern-day cruising and vacations at sea.

The significance of the show’s impact on the cruise line was not lost upon Jan Swartz, the line’s president.

“‘The Love Boat’ put Princess Cruises on the map, bringing the romance and adventure of our cruise vacations into millions of viewers’ homes for the decade it was on air,” Swartz said. “So it was fitting that the cast was selected as godparents for Regal Princess as we begin our 50th anniversary celebrations.”

As the ship’s godparents, the cast had the honor of pulling a lever to release 50 champagne bottles that smashed against the ship’s hull. The record-breaking number of bottles served as a nod to the line’s 50th anniversary in 2015. A gigantic, Nebuchadnezzar-sized 51st bottle of champagne (about 34 ounces) then shattered against the ship as a symbol of the line’s continued success. Above, the Nebuchadnezzar-size bottle breaks against the ship. (Photo Carlo Allegri/AP Images for Princess Cruises).

Florence Henderson, a regular guest star on the show, served as master of ceremonies for the evening, while Charo, the most frequent guest star, entertained guests with a guitar number. Jack Jones, the original performer of the show’s theme song, reprised the famous tune.

The pilot episode of the show was shot on the 730-passenger Sun Princess, with the Pacific Princess and Island Princess becoming the primary floating backdrops for the show. Later episodes and specials were filmed on numerous other Princess ships in locations around the globe.

The 3,560-guest Regal Princess demonstrates the leaps and bounds cruise liners have taken since then. Among the features found onboard are: The Regal Princess began her maiden season of Caribbean vacations out of Fort Lauderdale. Princess Cruises first set sail in 1965 with a single ship, and in its 50 years has grown to 18 ships and is the third-largest cruise line in the world. 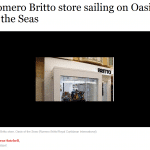 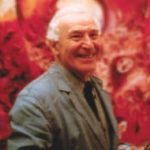 Savior of Marc Chagall and other artists honoredArtists & Special Collections, In the News, Marc Chagall