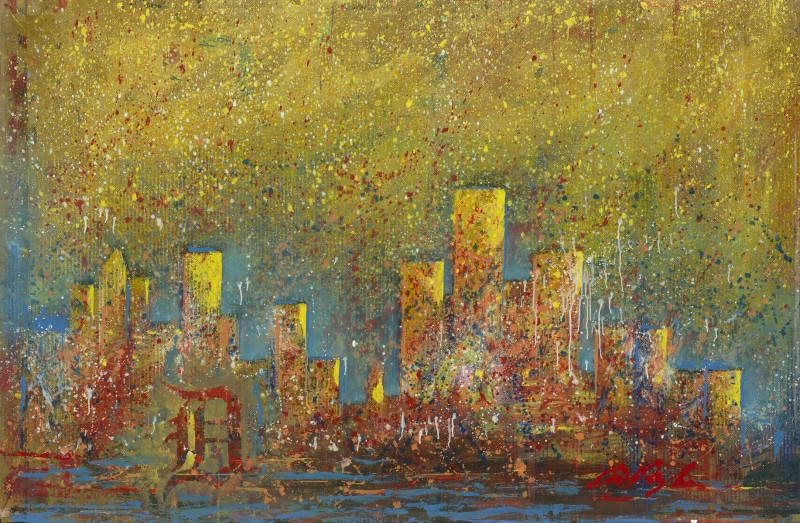 SOUTHFIELD, Mich. July 20, 2015 – Park West Gallery, known for fine art auctions on cruise ships and its art gallery in Detroit, will wrap up its Detroit-themed exhibitions with artist Dominic Pangborn.

Park West Gallery will host the third of its “Detroit’s Finest” series July 26 to Aug. 16 at its Southfield, Michigan location. The public is invited to meet Pangborn at an opening reception on July 26 from 12 p.m. to 4 p.m.

This is the first show at Park West Gallery focused on Pangborn, giving art lovers a rare chance to view and collect Pangborn artwork not typically featured in other venues.

“I like to really showcase works that, in my view, are beyond the norm – works that are very highly expressional, personal,” Pangborn says. “A lot of works coming into the show are from the personal archive.”

Pangborn placed in the top three during the 2014 ArtPrize contest in Grand Rapids, Michigan with his “Michigan in Motion” artwork. The 10-foot work will be featured during the exhibition.

“Although skillfully working in multiple mediums and disciplines, one can clearly see Pangborn’s approach as both methodical and consistent,” said David Gorman, Park West Gallery Director. “Park West Gallery is pleased to have captured a series of recent works that speak of the evolving nature of Pangborn’s work.”

Pangborn is a former professor at Detroit’s College for Creative Studies and was awarded an honorary doctorate from Marygrove College in Detroit. He established the Pangborn Design Collection of high fashion accessories such as limited edition silk scarves and ties, which has been carried by Saks Fifth Avenue and Nordstrom. The artist’s remarkable breadth of expression was also demonstrated in a 2014 retrospective show in Jackson, Michigan at the Ella Sharp Museum.

Pangborn was born in Korea, and at the age of 10 was adopted by the Pangborn family of Jackson, Michigan. At age 12 he discovered that art allowed him to express himself. He studied at the Chicago Academy of Art, and in 1978 moved to Detroit from Chicago with his wife.

The Pangborn exhibition is the last in a series of Park West Detroit artists, which featured the art of Marcus Glenn and Tim Yanke.

Park West Gallery in Detroit connects artists to fine art aficionados via art auctions at sea by creating an entertaining, educational and welcoming environment that ignites a passion for the arts.