“The Passion” by Lebo. The Miami-based artist used da Vinci’s “The Last Supper” as inspiration for this work.

In honor of the Easter holiday, we are taking a look at Park West Gallery artist David “Lebo” Le Batard’s painting “The Passion,” which was inspired by Leonardo da Vinci’s “The Last Supper.”

“The Last Supper” is based on the Bible scene found in the Gospel of John. In da Vinci’s mural, he depicts Jesus and his 12 disciples when Jesus announced one of them would betray him. Nearly every disciple has a look of shock or surprise in reaction to the revelation.

Lebo says his 2015 painting uses da Vinci’s mural as a departure point. He says he wanted to create an image that took a masterwork and rearranged it while maintaining the essence of the original painting.

“What drew me to ‘The Last Supper’ was the way it almost plays like a drama,” he says. “Each figure, from their faces to their hands, tells a part of the tale – the way two figures are placed together balances out through rhythm and dynamic composition.”

In Lebo’s work, he depicts Jesus and his disciples in his post-modern cartoon expressionism style, using only their faces and a few hands instead of full bodies. Most notably, a hand next to the face of Jesus is making a peace sign.

A blue-gray background of glitter brings out the bold colors of each face. Lebo was inspired to use glitter in his artwork from Park West Gallery artist Patrick Guyton.

“I was seeing all this gold leafing he was doing and the way he played with light, and it really fascinated me, so I wanted to do my own version of that,” he says. “It really makes your eyes dance.”

“The Last Supper” has directly inspired a multitude of artists over the years, including Salvador Dali and Andy Warhol. It is considered one of the world’s most famous and studied paintings, and has been referenced and satirized in film and literature.

Lebo says this isn’t the only masterwork that has inspired him. He has used “Guernica” by Pablo Picasso and “The Third of May” by Francisco Goya as departure points as well as Piet Mondrian’s “Reclining Nude” and “The Great Wave Off Kanagawa” by Hokusai. 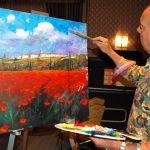 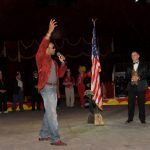