As one of the world’s foremost tropical artists, Ashton Howard brings the tranquility, light, and colors of the ocean to collectors around the world with his enchanting paintings and remarkably fluid art style. The self-taught artist has exhibited in the United States, Canada, and Japan, and his art has become a staple for anyone who loves the outdoors.

Born in 1979, Howard was raised in Pensacola on the Gulf Coast in Florida. Growing up near the water inspired Howard, entrancing him with its glimmering waves, white beaches, and tropical flora.

Howard was always interested in art, a passion he fostered in high school. This passion led him to enroll at the Savannah College of Art and Design in 1999, but he soon decided to leave after realizing his methods and vision didn’t fit into the art school’s structured curriculum.

Howard traveled the world seeking artistic inspiration from exotic locales. His journey ultimately led him to Encinitas, California in 2001. He worked as a self-described “struggling artist” in Laguna Beach, supporting himself by teaching surfing lessons and painting surfboards. 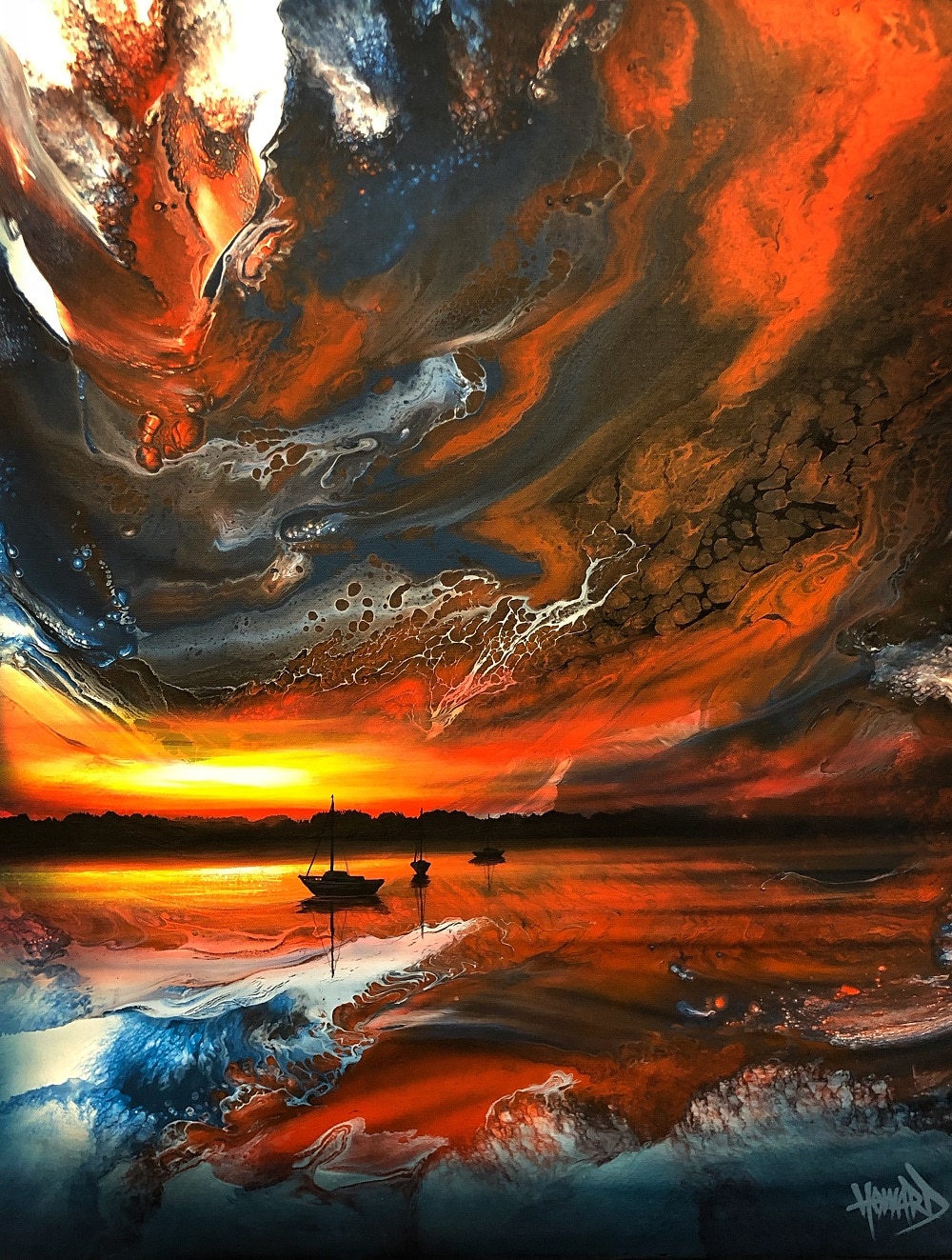 Nonetheless, Howard persisted, deciding to become a professional artist. He sold his art on the street, including original paintings and landscapes painted onto smooth rocks he gathered from the sea. His art attracted the attention of galleries and, before he knew it, Howard’s art was in more than 25 galleries around the world.

Howard returned to Florida to live in Pensacola with his family. He continues to use his love of the ocean as the basis for his artwork, expanding his talents to include photography and design.

Murals painted by Howard have popped up over recent years. These include murals at the Sacred Heart Women and Children’s Hospital in Pensacola, Florida; Pepperdine University in Malibu, California; and several locations in Houston, Texas.

With a self-taught style that blends realism and abstract expressionism, Howard’s art is just as much about the subject as it is about the moods it evokes—moods that one can only encounter when they’re alone with nature.

“I study the way sunlight reflects and exposes itself through the waves, the abundant sea life of our oceans, and the way the entire sky seems to open up when you are at the water’s edge,” Howard says. 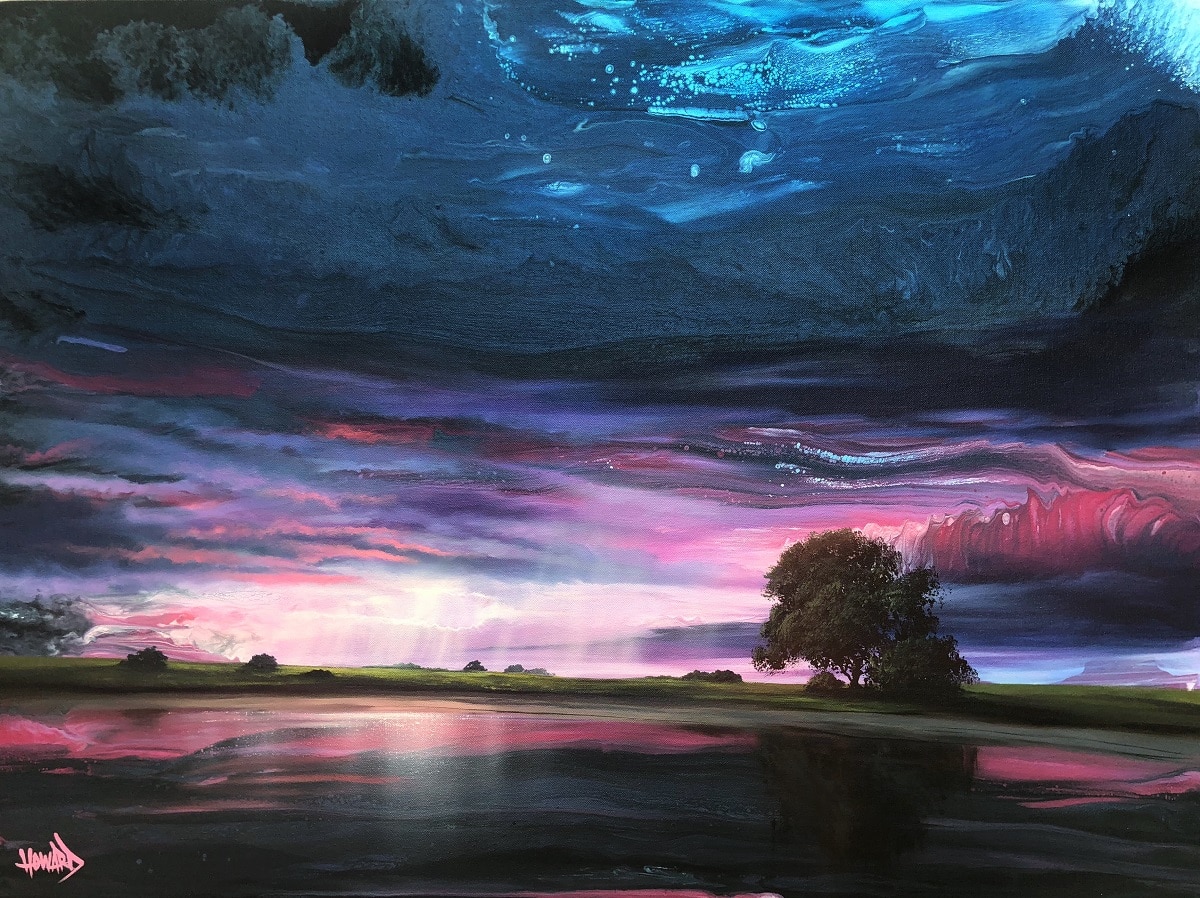 Howard’s paintings are created using water-based acrylic paints and resin, applying several different techniques to achieve a realistic fluid movement in his works. He starts by mixing several colors with special acrylic additives, then pouring these into one another on the canvas allowing the colors to organically mix and flow together.

Using several tools such as compressed air, big pallet knives, and gravity—he manipulates the paint until a fluid movement is reached. Large drying fans in his studio solidify the first step in his artistic process revealing intricate detailed abstractions on top of the canvas. Howard then begins his detailed work—a process of design and imaginative elements begin to come to mind as he views each canvas and decides what he will paint. 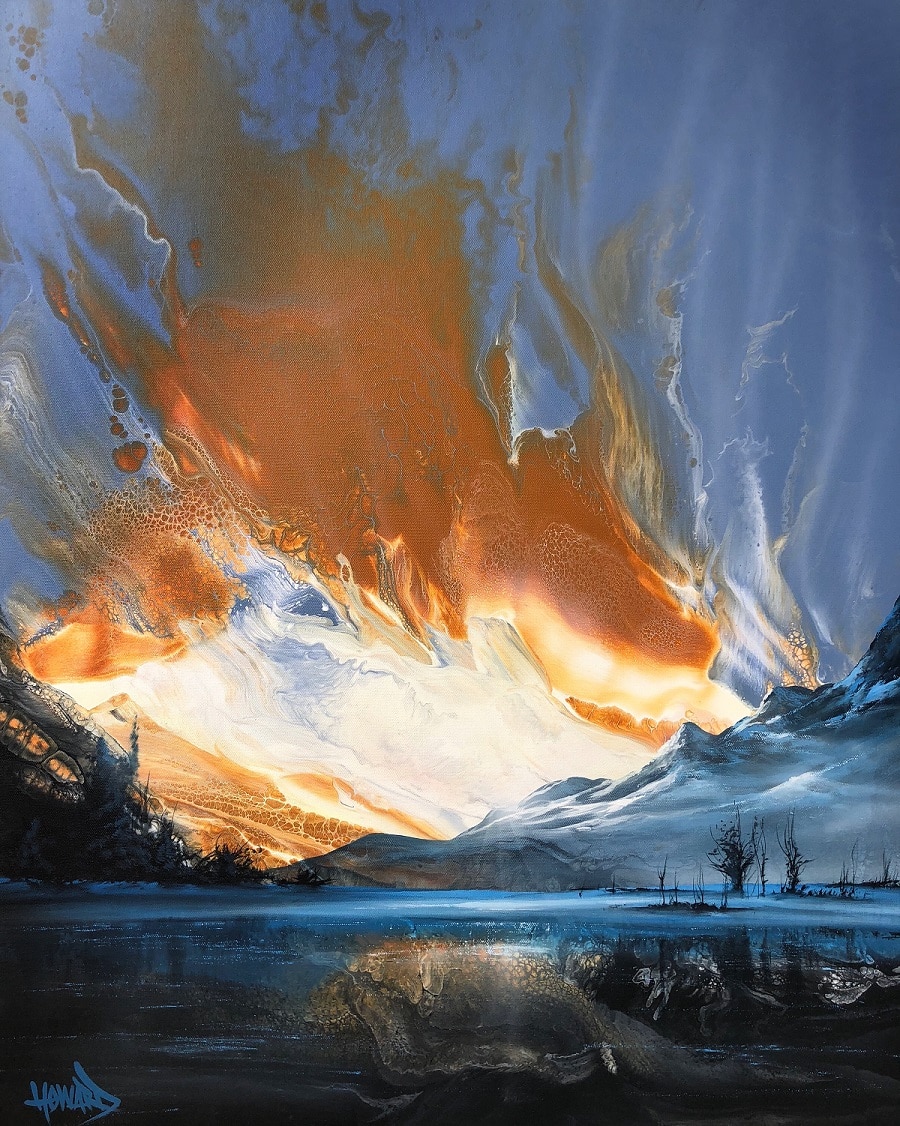 His ability to seamlessly create unparalleled landscapes into such wild abstract backgrounds has given him a truly unique style of work, a style that he has named “Fluid Realism.”

“My love of art seems to have developed through trials and errors over the years and continues to be focused on painting the ocean and landscapes that surround me,” says Howard.

“Through painting and my experiences in nature the inspirations are endless and so are the hours that are involved each day; it is an obsession and one that I love very much. On one hand I love the pure creation and imagination it takes to turn a blank canvas into a beautiful landscape and on the other I yearn for being outdoors or in the water with my camera capturing incredible moments that happen in time.”

To collect the artwork of Ashton Howard, contact our gallery consultants at (800) 521-9654 ext. 4 or sales@parkwestgallery.com.

Ashton Howard is having a spectacular holiday season so far. The Florida-based artist is coming off a string of sold-out auctions for Park West Gallery, the world’s largest art dealer. Earlier in [...]