Two works by Albrecht Dürer and Rembrandt van Rijn reported as missing from the Boston Public Library (BPL) were revealed to have been misfiled.

After digging through nearly 60 percent of the library’s print collection, the etching by Rembrandt and engraving by Dürer were located, ending a search that involved the FBI, Boston Police Department and U.S. Attorney’s Office.

The announcement was made on June 4, eight weeks after the library realized the works were missing. Library President Amy E. Ryan had said the library hoped the works were simply misplaced. Boston police, however, didn’t rule out the possibility that the works, valued at a combined $620,000, may have been stolen.

“We’re thrilled to have found these treasures right here at home,” said Ryan. “They were found safe and sound, simply misfiled. BPL is still committed to enhanced security and a full inventory, but today is a day of celebration for the entire team at BPL.”

Lauren Schott, a conservation officer with the Boston Public Library, was the one who found the items. She was modest about locating the valuable artwork amidst the library’s 200,000-item collection of prints.

“I was shocked to find the two prints, but it really was just luck of the draw. Anyone of the team that’s been looking for the Dürer and Rembrandt could have found them,” said Schott.

The Rembrandt and Dürer were found together approximately 80 feet from where the items should have been filed.  A total of 14 staff members searched 180,000 of the print stack’s 320,000 items – which includes 200,000 prints and drawings in the Print Collection and 120,000 chromolithographs – totaling 38 rows of the 60 rows of print stacks.

The case has inspired the library to enhance its security measures, especially as it receives more than 3.7 million visitors on an annual basis. The plan includes an inventory of the 320,000 collection by an expert preservationist and upgrading from catalog cards to an electronic catalog.

Ryan has also announced that she will resign from her position as of July 3, 2015, saying it will “allow the work of the Boston Public Library to continue without distraction.”

The crisis of the missing Dürer and Rembrandt may have been averted, but Boston is still the victim of an unsolved art crime. Read more about how the infamous Gardner heist has remained a mystery for 25 years. 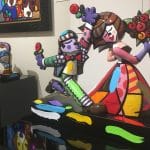