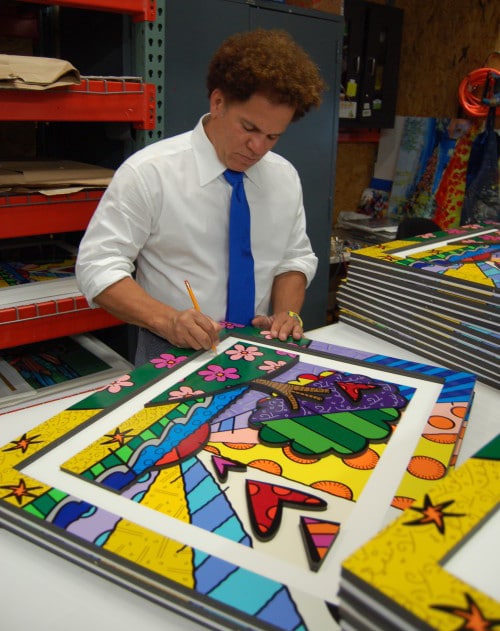 Romero Britto signing his three-dimensional artwork. Britto was chosen to be an ambassador for the 2016 Olympics.

MIAMI LAKES, Fla., Feb. 11, 2015 – Park West Gallery artist Romero Britto has been selected to represent his native country when the Olympics come to Brazil in 2016.

Britto unveiled the news during a visit to Park West Gallery’s Miami Lakes location on Jan. 20. The Brazilian Olympic Committee appointed the Neo-pop artist to be an ambassador for the 2016 Summer Olympics. As an ambassador, Britto encourages the participation and involvement of fans for the international athletic event.

For the Miami resident, the role is an extension of what his art stands for, which is to bring joy and happiness to others.

This isn’t the first time Britto has been a global sports ambassador. In 2014, he served as a FIFA ambassador for the World Cup in Brazil, and was the official artist for World Cup 2010.

Growing up in Recife, Britto drew on everything from newspapers to cardboard. He would hone this talent and become a world-renowned artist, but admits at one point in his life he wanted to become a diplomat.

Britto displayed this diplomacy when he held a painting party with the 2015 Miss Universe contestants at his Miami studio on Jan. 11. The fundraiser benefitted Best Buddies International.

“The girls represent so many different cultures and countries,” he said. “To me it was a real privilege to work with them.” 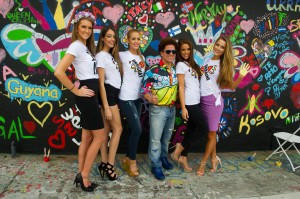 Britto combines cubism, pop art and graffiti painting into his style, citing influences like Pablo Picasso and Henri Matisse. After moving to Miami in 1988, he was asked to create art for Absolut Vodka’s Absolut Art campaign, exposing his colorful style to millions.

Park West Gallery is proud to represent Britto, including three-dimensional artwork exclusively offered by the gallery.

Park West Gallery in Detroit connects artists to fine art enthusiasts via art auctions on cruise ships and via a public art gallery in Michigan. Park West Gallery prides itself on creating an entertaining, educational and welcoming environment that ignites a passion for the arts and offers an incomparable collecting experience. 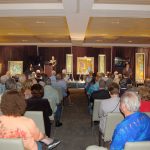 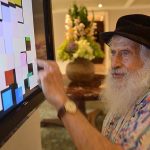