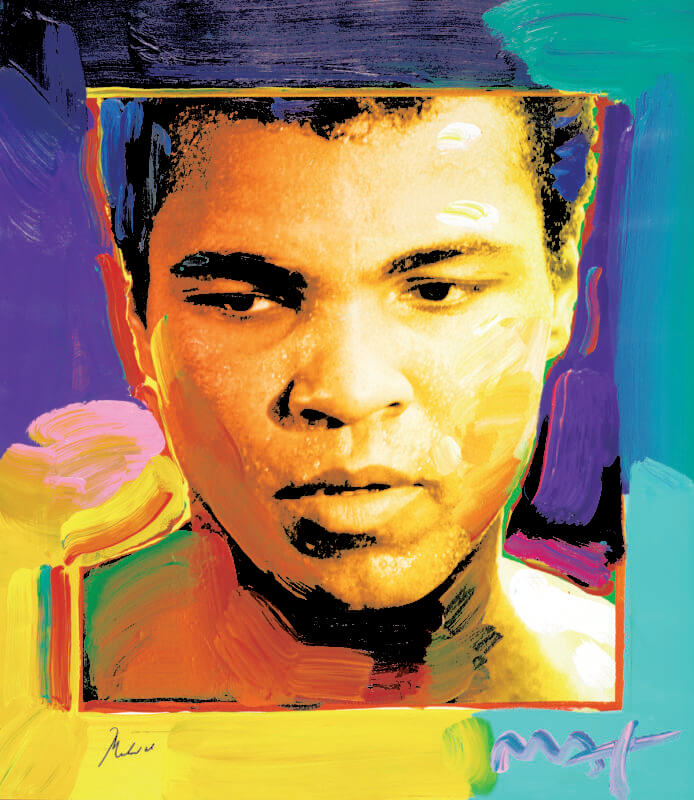 SOUTHFIELD, Mich., June 7, 2016 – Park West Gallery joins the world in mourning the loss of boxing legend Muhammad Ali, who passed away at the age of 74 on June 3.

The three-time World Heavyweight Champion boxer passed away from complications related to his 32-year-long battle with Parkinson’s disease. A public funeral service will take place in his hometown of Louisville, Kentucky at 2 p.m. on Friday, June 10 at the KFC YUM! Center. The event will also be streamed live from www.alicenter.org.

“Park West Gallery is saddened by the loss of one of the great figures of our time.  We offer our condolences to Ali’s family and friends,” says Park West Gallery Founder and CEO Albert Scaglione.

Since 2004, Park West Gallery had the honor of collaborating with Ali on multiple projects, including providing collectors the opportunity to acquire sports memorabilia and photos signed by the Champ. Ali also worked with Park West artists Simon Bull and Peter Max to create a series of paintings dedicated to the boxing legend’s career. A number of these works are featured at the Muhammad Ali Center.

Mourners can pay their respects at the Muhammad Ali Center, located at 144 N. 6th St. in Louisville. The family is asking for donations to the center in lieu of gifts or flowers.

Ali will forever be remembered as The Greatest, with a record of 56-5 with 37 wins by knock out. Born Cassius Marcellus Clay, Jr., the Champ took on his new name, Muhammad Ali, following his conversion to Islam. He became the world heavyweight champion at age 22 after his upset of Sonny Liston in 1964.

Ali was known for having an unorthodox fighting style for a heavyweight, embodying his catchphrase “float like a butterfly, sting like a bee” by relying on superior reflexes and speed.

Founded in 1969, Park West Gallery has connected artists to more than 1.8 million fine art collectors through cruise ship art auctions and via a public art gallery in Michigan. Park West Gallery creates an entertaining, education and welcoming environment that ignites a passion for the arts and offers an incomparable collecting experience.