The striking artwork of Clare Sykes is characterized not only by her use of expressive strokes and textures, but her passion for life’s beauty.

Clare’s floral works and seascapes burst with vibrant color and textures while simultaneously exuding serenity, making her a favorite among collectors around the world.

Born in Farnham, Surrey, England on May 23, 1972, Clare left her native country in 1985 to live in the United States. She remained there for seven years before returning to the United Kingdom.

She moved to the Mediterranean in 2003, living in Spain for a year before relocating to Greece, ultimately returning to the United Kingdom in 2012. During her time in the Mediterranean, Clare felt an overwhelming need to create. The vibrant colors and atmospheres she encountered became the foundations for her career. 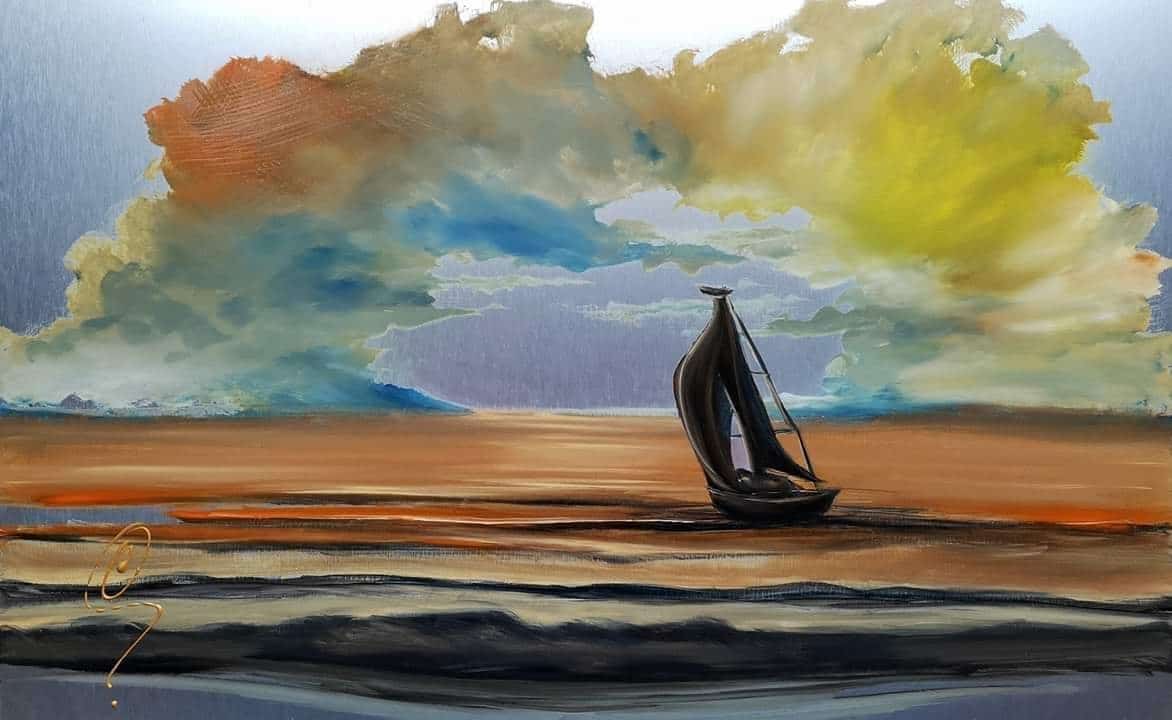 Clare is a self-taught artist who uses her raw passion and creative energy to fuel her craft.

“It represents a happy place I have found for myself to share with everyone else,” Clare says of her art. “Artwork frees your imagination and mind to fly. It’s the essence of who you are.”

By drawing on her imagination and experiences as the basis for her art, Clare imbues a piece of her personal story into each work of art, and is honored to have those stories live on for years on her collectors’ walls.

“Not every wall deserves a painting, but every painting deserves a wall!” she says.

Clare worked with the largest publishing agent in the United Kingdom for three years, and has regular clients in Dubai, Asia, China, the United States, Canada, Australia, and the Philippines. In April 2017, DuJour Magazine commissioned Clare to create a cover piece featuring Salma Hayek for its Spring edition. 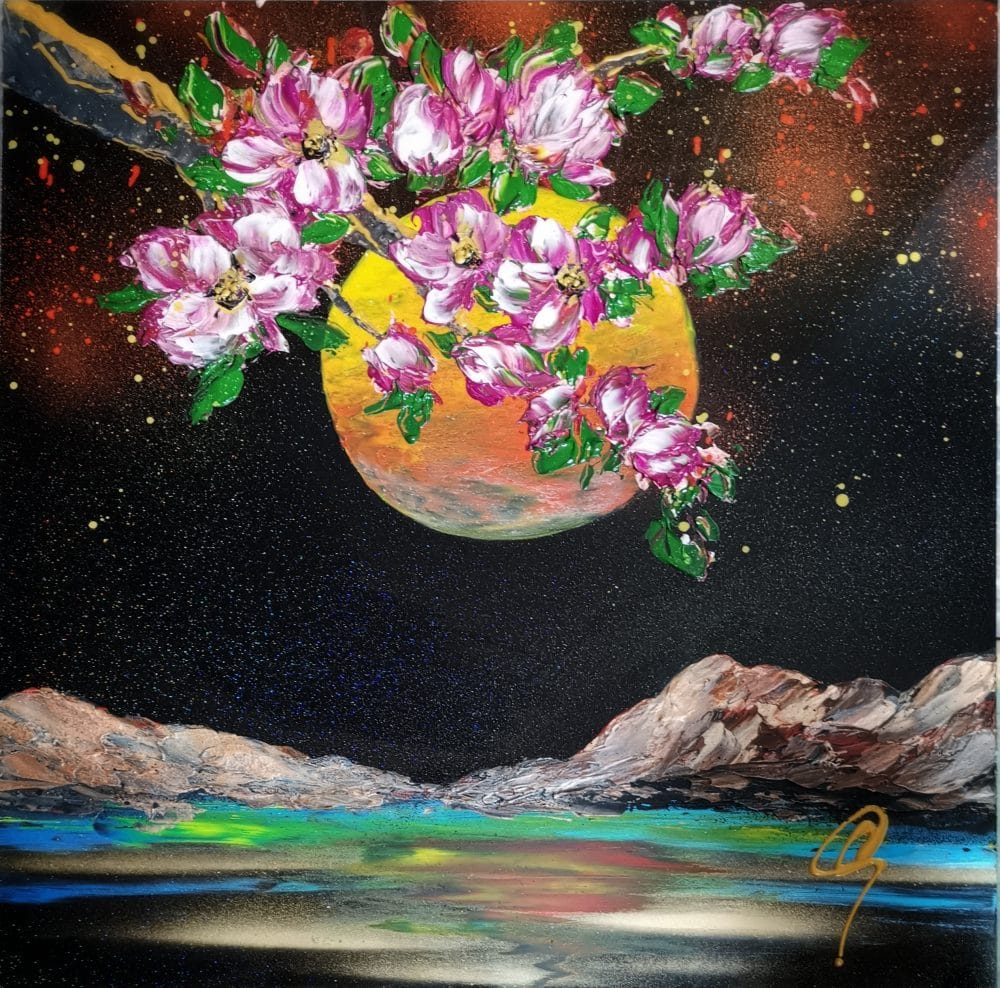 Clare works and resides on the south coast of England. Her dog, BB, has been by her side since she began her career, with the artist admitting that “his tail has been many colours over the years.”

The artist is as passionate about charity work as she is about art. She donates her artwork on an annual basis to raise funds for The Chestnut Tree House, a children’s hospice center; the PAWS Animal Sanctuary; and Starchild, which builds schools and educates children in Africa.

The impasto technique is a defining trait of her artwork. She applies thick swathes of acrylic paint onto the canvas to produce eye-catching textures. Whether it’s flower petals, leaves, or rolling waves, these rich textures capture light and shadow in distinctive ways that flat paintings cannot. 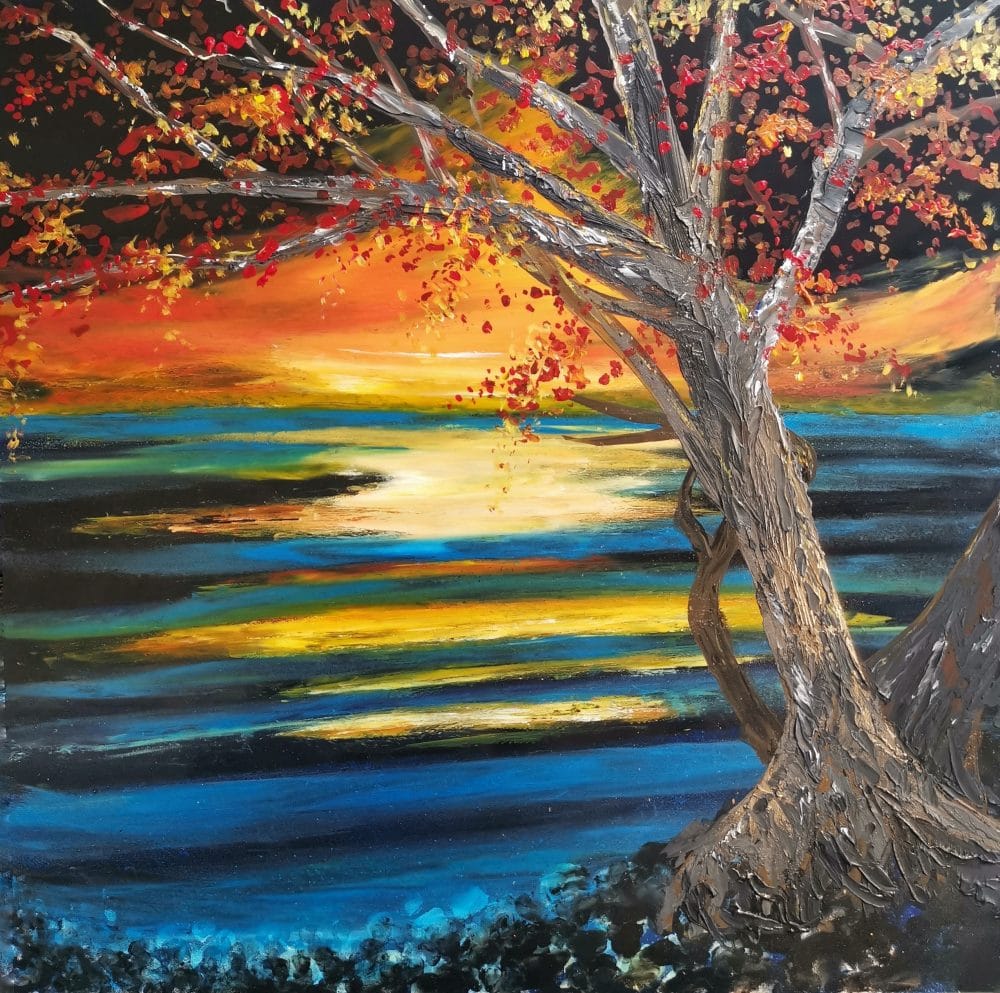 The third component, passion, is defined by Clare as her appreciation of everything around her, even if it’s something as simple as the air we breathe or flowers. She harnesses this passion in order to convey positivity in her art.

As a self-taught artist, Clare’s style is constantly evolving. Among her techniques is finishing her art with splashes or drips of paint. These abstract touches add an extra layer of depth and a pop of color to her vivid works. One of her most recent techniques, which she calls “organic elementation,” involves painting on aluminium.

Clare says living by the sea has inspired many of her works of art over the years. Whether it’s the changing weather, listening to the crashing waves or seagulls, or admiring the region’s colors, she is compelled by her environment to express her emotions on canvas.

Clare Sykes knows a thing or two about beauty. This astoundingly accomplished English artist is an expert when it comes to capturing the majesty of the natural world on canvas. Her compositions [...]