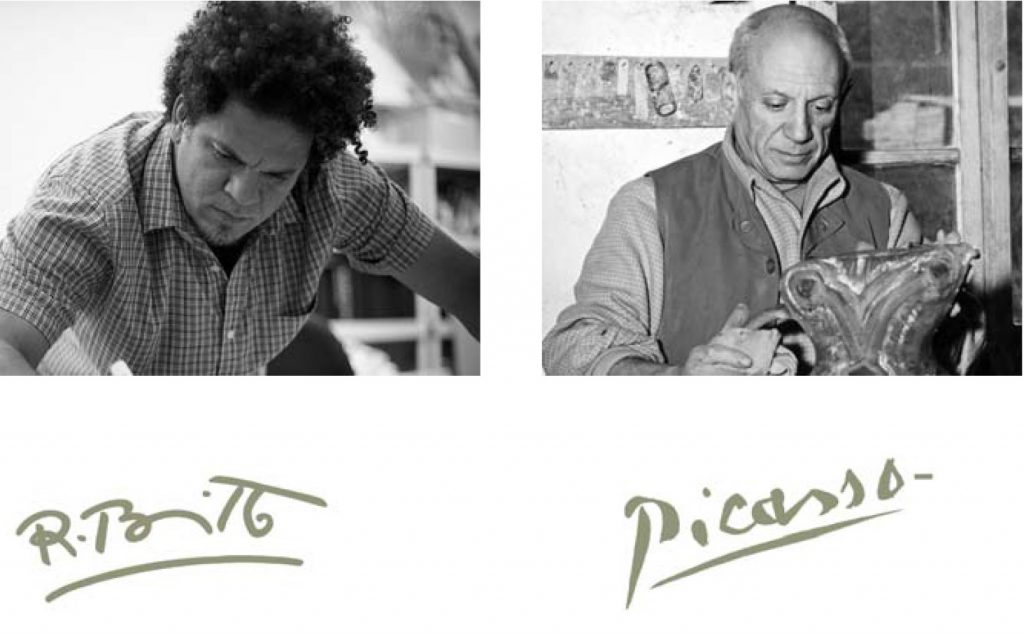 Picasso and Britto—two artists whose lives could not have been more different, but whose art evolved quite naturally by turning the familiar into something strange and unique. They are both full of that restless drive which the gods bestow upon their favorites.

Picasso once said: “If I run out of oils, I’ll paint with watercolors, if I run out of watercolors, I’ll use a pencil, and, if I’m thrown in prison, then I’ll spit on my finger and paint on the wall.” Britto, who comes from a modest social background, began painting as a child. He painted on newspaper, scraps of cardboard, or anything he could find to feed his insatiable creative urge.

Picasso’s approach was groundbreaking, and like Britto’s, so fresh that most of their contemporaries were unable to assess it initially. This is a sure sign that their art, which has now gained global popularity, possesses a genius and magnitude that lasts for centuries and becomes part of mankind’s legacy.

SIMILARITIES BETWEEN THE WORKS OF ROMERO BRITTO AND PICASSO

A genius can always be recognized by the fact that their work is incomparable to that of others. If we now consider Romero Britto’s similarities with Picasso, it is because he, like the Spaniard, has created a totally new and unique abstract style. The development of Britto’s art and stylistic techniques often runs parallel to those of one of the greatest artists of the 20th century.

Like Picasso, Britto’s quest for a unique style found its expression in Cubism. Motifs we observe can be divided into surfaces and these surfaces re-assembled to form a picture, as demonstrated in this digital abstract of the Nefertiti bust. 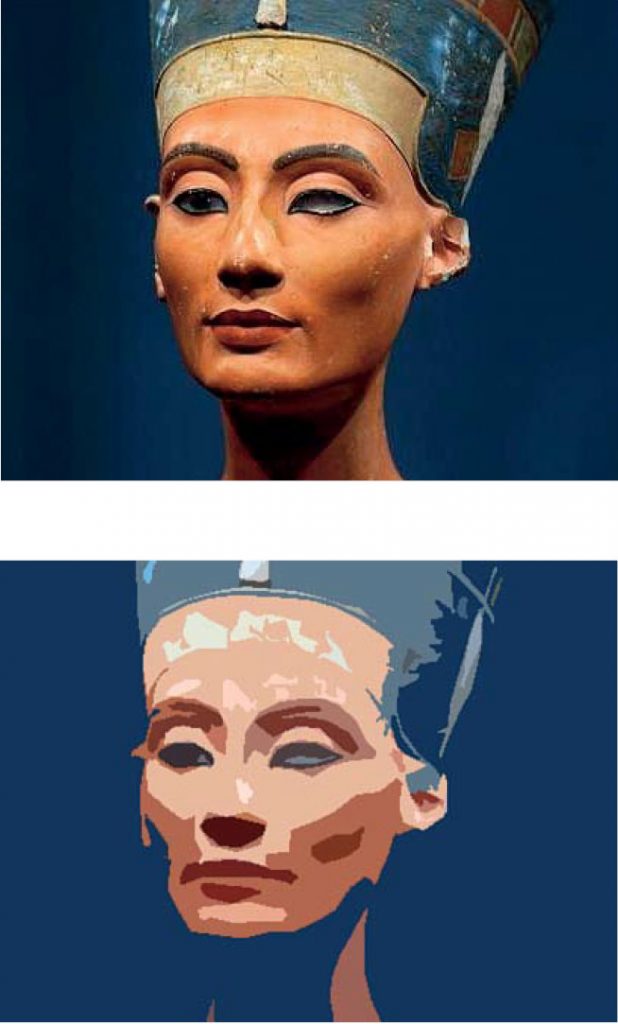 Picasso’s most famous picture from his Cubist period is “Les Demoiselles d’Avignon.” 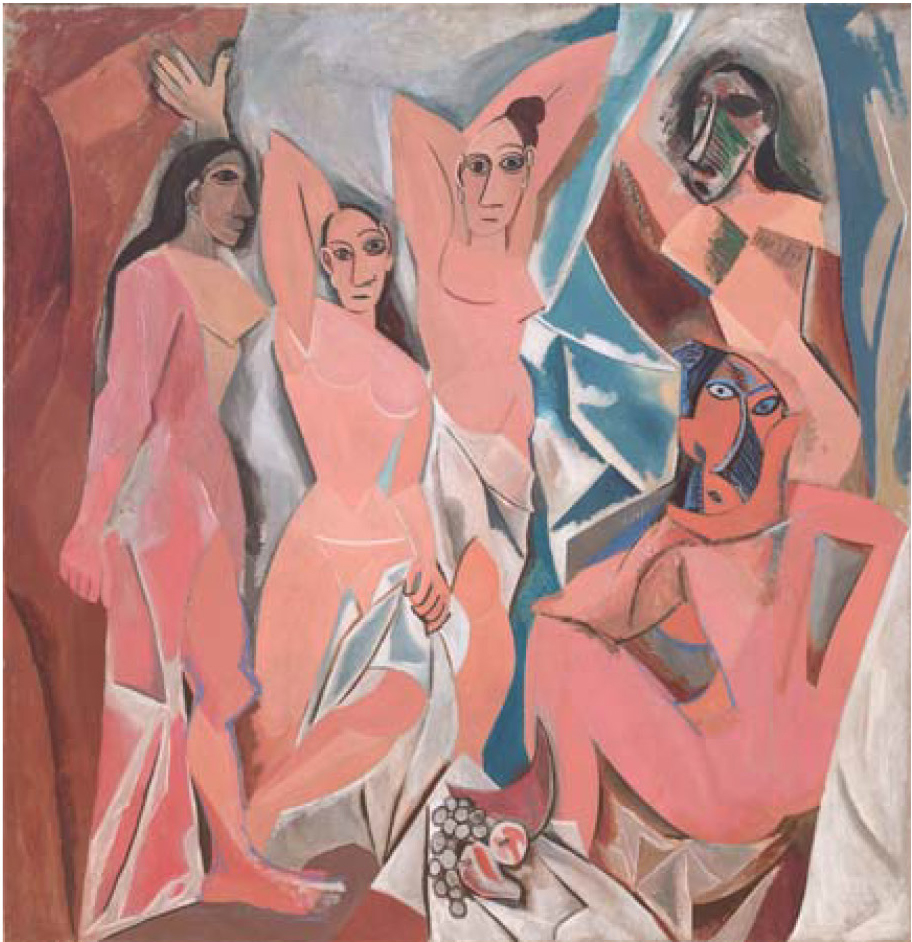 Britto’s early works—forerunners to the individual style which he was later to develop—feature a fragmentation of motifs into colored surfaces, sometimes making them strongly redolent of Picasso’s works. 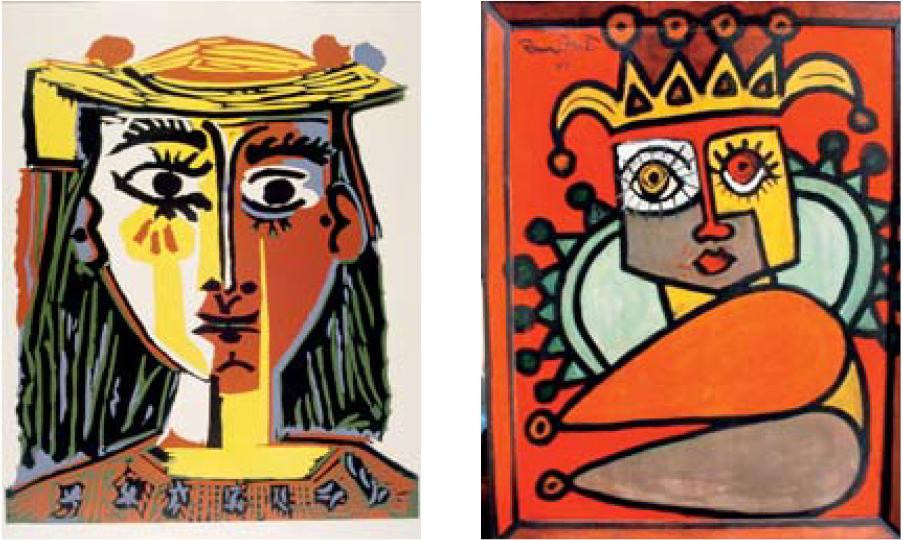 When trying to decipher an artist’s language, one inevitably comes up against their choice of motifs and how the abstraction ignites or extinguishes the viewer’s imagination. Here the two artists again display a close affinity which has not been learned or adopted, but which mirrors the natural development process of their artistic language. 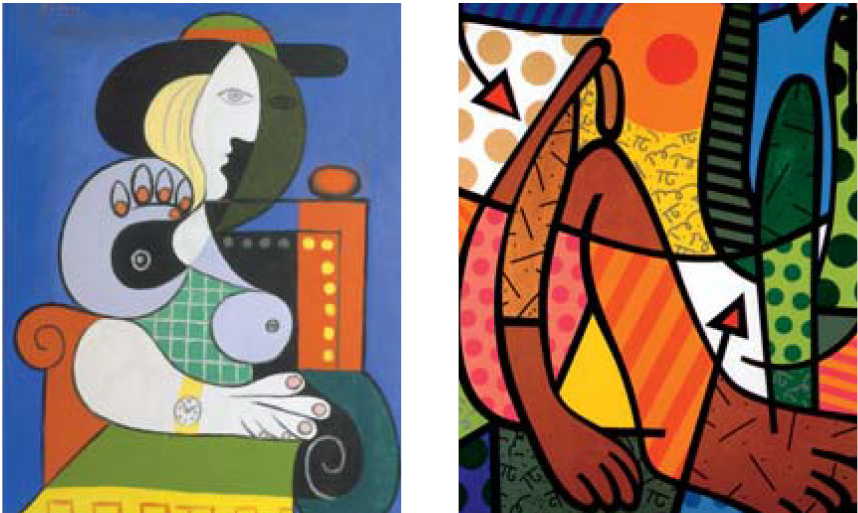 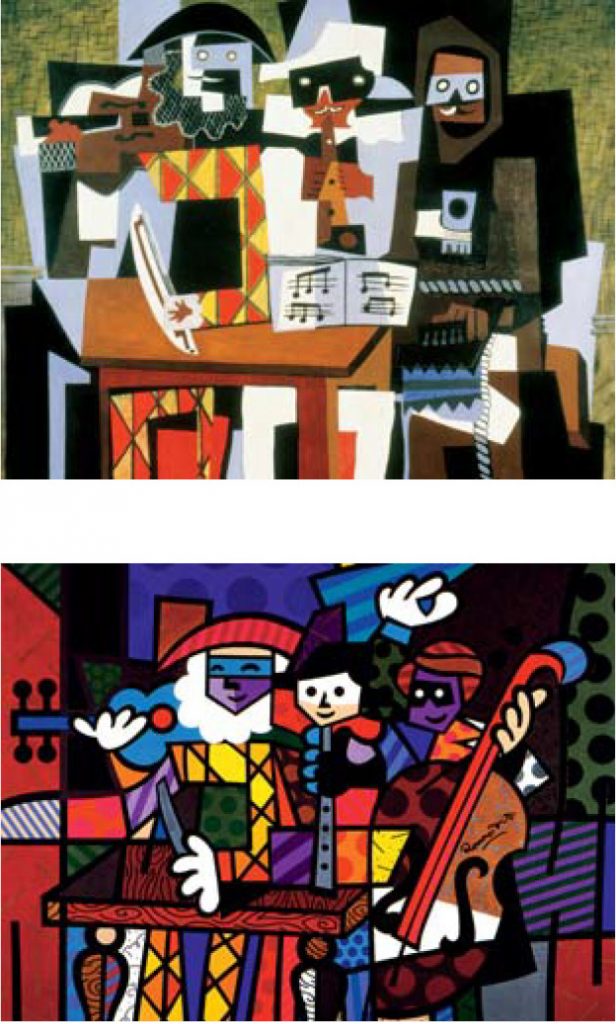 Finally, when it comes to the impact of each artist’s paintings, there are again multiple similarities but also distinct differences. Many analogies can be seen in their proximity to nature, the primordial, and the intrinsic. The main differences can be found in the cheerfulness and zest for life which seems to emanate from almost all of Britto’s works. 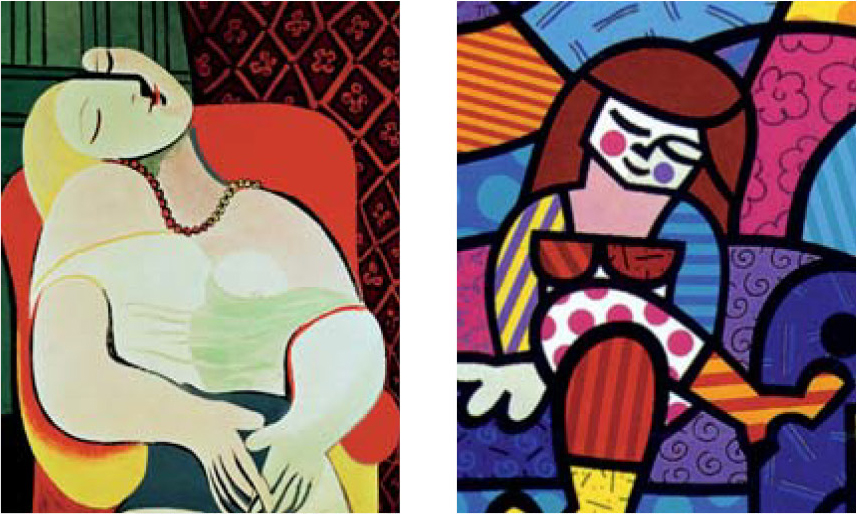 Picasso, on the other hand, lived through two world wars, the Spanish Civil War, and several family tragedies, and his works sometimes hint at darker aspects of his psyche. Both artists are united by their common ability to make every line, every color, and every surface of their paintings seem to laugh or cry. However, Romero Britto ignites almost every single work with such an intense Brazilian vitality, as if he were a descendent of the sun god Helios himself, so that anyone who has a Britto hanging on their wall never needs to raise the blinds in the morning. 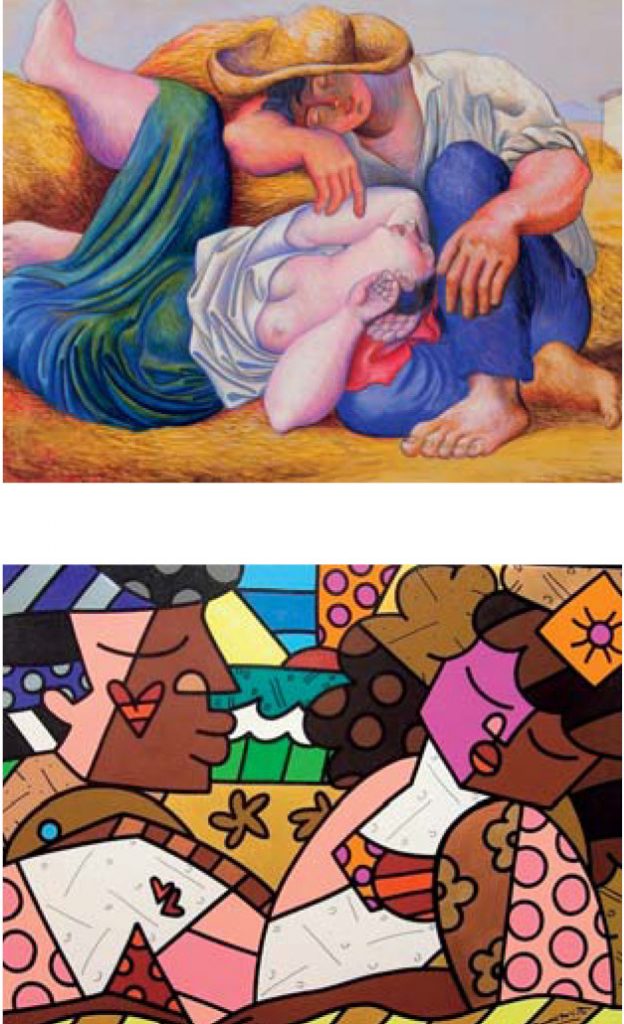 Both Picasso and Britto integrated the essence of Cubism into their own artistic language and used it as their primary stylistic means of communication. 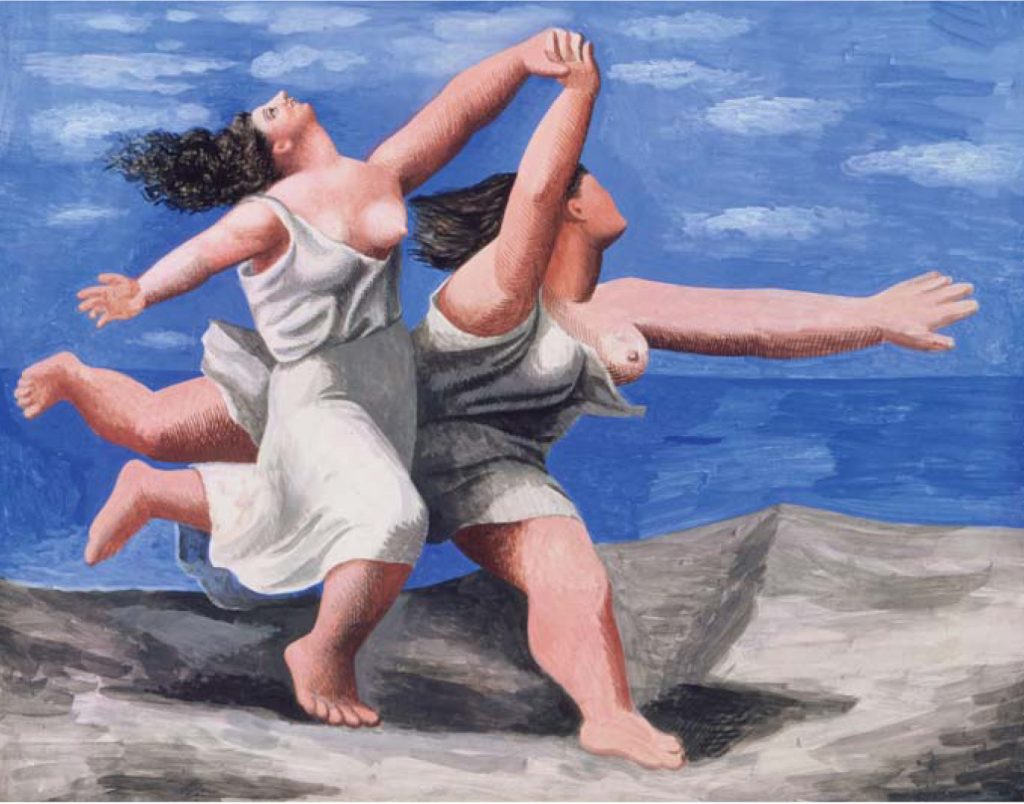 Picasso’s “Le train bleu” was used as a backdrop for Diaghilev’s Russian ballet and in its expression is similar to Britto’s “Love Blossoms.” 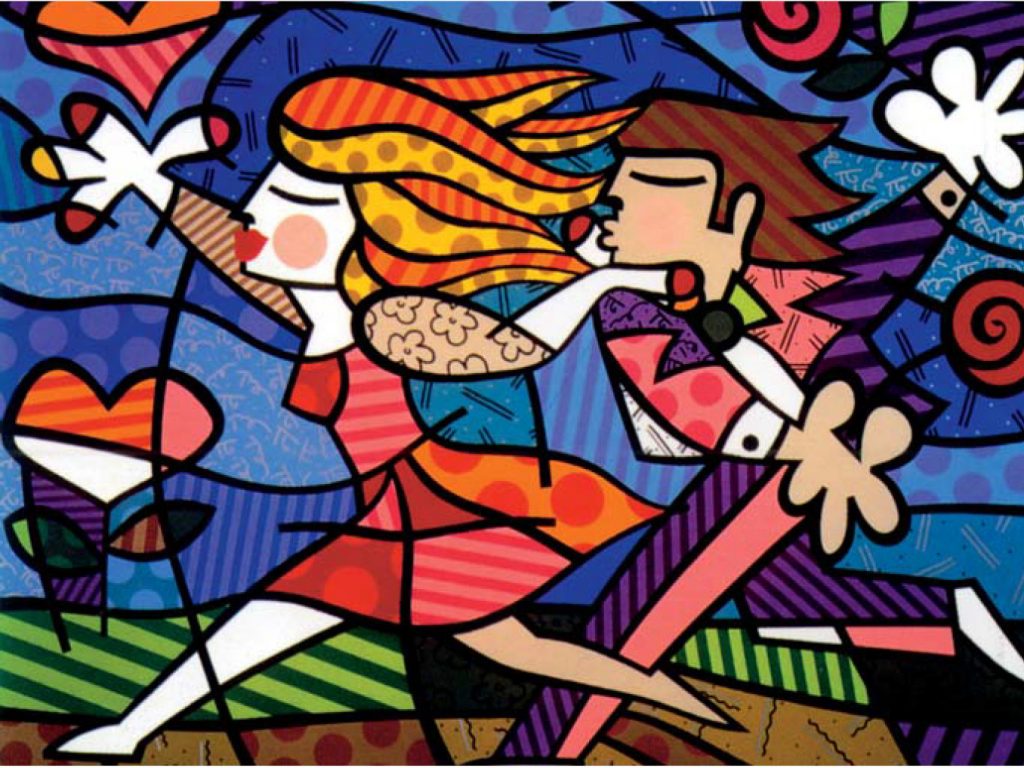 A STROKE OF GENIUS

The affinity between Picasso and Britto is further documented in the genius of their line drawings. They are both masters in endowing the “strokes” of their line drawings with life and soul, and in the way they condense the essence of nature into a few “dashed-off” lines which are far more effective than any photograph. 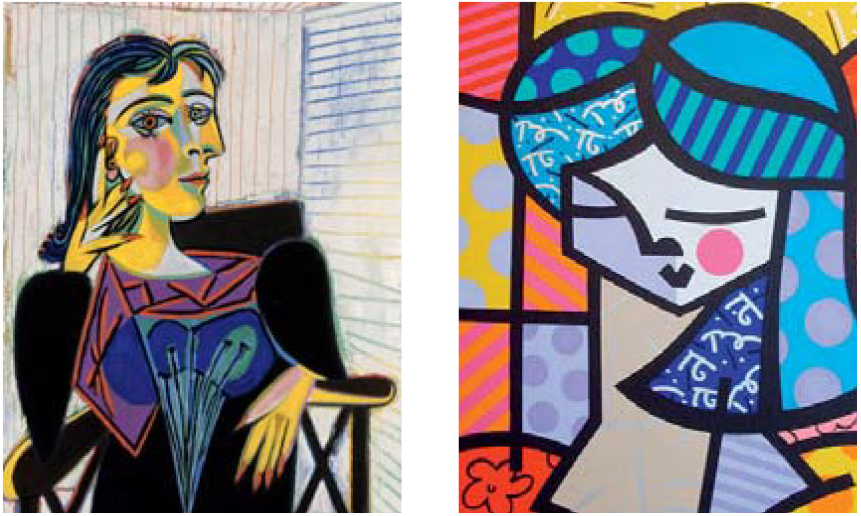 The Spaniard Pablo Picasso and the Brazilian Romero Britto can not—and do not wish to—ignore the colors of their sun-drenched homelands. They both have the impulse not to mix colors but instead to use dots, hatching, and other elements which allow a range of different shades to harmonize into one overall composition, just like in nature. Their aspiration is to create art that is to be felt as opposed to “read.” 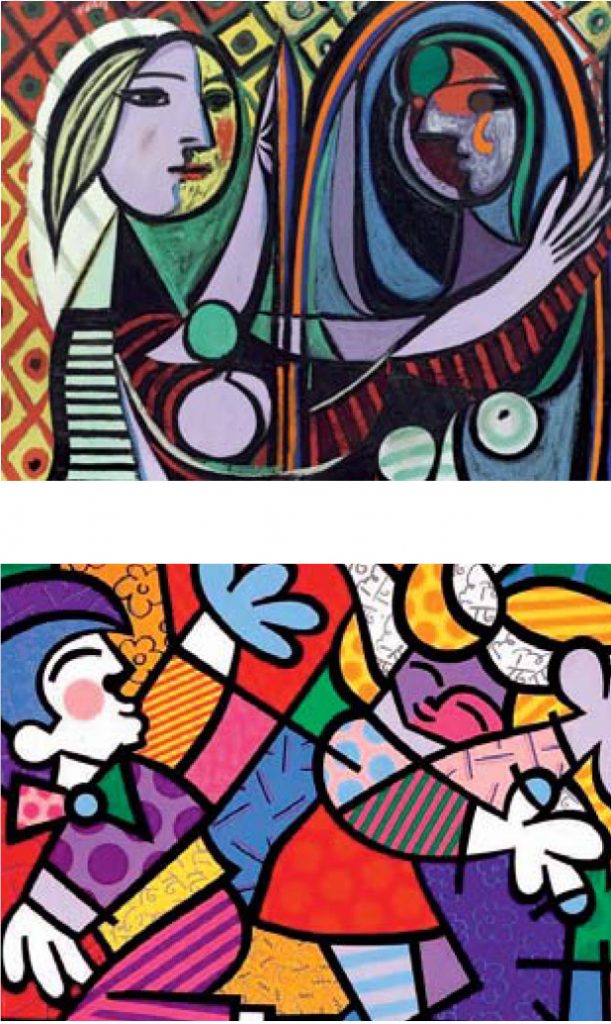 ROMERO BRITTO ON HIMSELF: 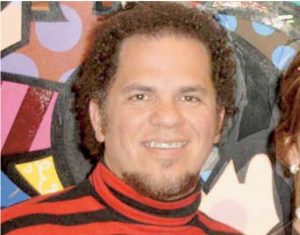 “Ever since I was a child, I have felt driven to express my feelings in pictures. Painting has allowed me to create a personal fantasy world to live in. I would like to give back to the world a little bit of the happiness that I have been lucky enough to enjoy. We celebrate my art amongst friends, so that we can then do something to help those less fortunate than myself, particularly children.”

1963: Born on October 6 in Recife/Brazil, the eighth of nine children.

1971: Starts to paint at a young age, using anything and everything as his canvas.

1977: First publication of his work and first solo exhibition in Brasilia.

1987: Moves to Miami, where he still lives with wife, Cheryl, and son, Brendan.

1989: Receives an invitation from “Absolut Vodka” to join their legendary “Showcase” group of artists.

From 1990: Achieves worldwide success, with exhibitions in museums and galleries, including MoMA and the Guggenheim in New York. Creates spectacular projects such as the largest installation ever in London’s Hyde Park; a 45-foot-tall pyramid in celebration of the return of the King Tutankhamen Exhibit; the largest living canvas for Super Bowl XLI in 2007; and exhibitions at the Carrousel du Louvre in Paris in 2008 and 2010.

PABLO PICASSO ON HIMSELF: 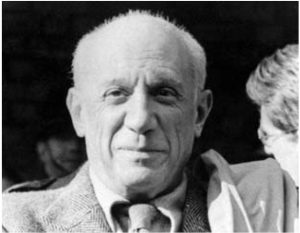 “It is my destiny to work, to work myself breathless. I am action: my creativity is often a kind of rage. The ideas never stop flowing because they come from the sensations that I gather and the observations that I record.”

1891: Studies under his father, Jose Ruiz Blasco, at the Art Academy in La Coruna.

1895: Studies at the La Lonja art school in Barcelona.

1905-1906: Works on paintings of gamblers and acrobats which characterize his Rose Period.

1906-1907: Begins his African Period, where he falls under the influence of African art and sculpture.

From 1912: Develops collages in his Synthetic Cubism Period.

From 1920: Paints monumental nudes and antique themes in his Classical Period. Creates drawings made up of simple outlines in an archaic style. At the end of the 1920s, he combines surrealist motifs with cubist elements.

1936-1939: During the Spanish Civil War, Picasso supports the Republicans and paints “Guernica.”

From 1950: Creates paraphrases (new adaptations) of works by old masters.

Copyright: © 2011 IWECOGmbH, Boppard. All rights reserved. No part of this publication may be reproduced without written permission from IWECO.

Picasso Photographs: Reproduction, including downloading of Pablo Picasso works, is prohibited by copyright laws and international conventions without the express written permission of Corbis, New York.

Disclaimer: The use, particularly the copying or distributing, of this copyright-protected publication and any of the text or illustrations it contains is not permitted without the prior written approval of the above-mentioned parties (IWECO, ARS, Britto Central) and is a punishable offense, providing that no exception is made in copyright law. In particular, storage and modification of the information in data systems is not permitted without the company’s approval. The use by third parties of the contact data legally required in the imprint for the sending of advertisements and information that is not expressly requested is forbidden. In the case that unrequested advertisements are received, for example spam, the site operators reserve the right to take legal action.