Marko Mavrovich, a California-raised painter of Croatian descent, vividly captures the essence of the sea in his art.

His tranquil paintings of seascapes and light colors are a result of growing up near the Pacific Ocean and the Adriatic Sea. Practical and resourceful, Mavrovich draws from what he knows—the seascape of the world.

Mavrovich’s art has been exhibited around the globe.

Mavrovich was born to Croatian parents living in California. He and his family moved between islands off the coast of Croatia when he was young, but spent most of their time on the island of Unjie. It was here he developed a love for sea life.

Mavrovich began to hone his artistic talents at the behest of his parents. His dad was a watercolor artist who wanted to see his son follow in his footsteps. During summers in Croatia as a late teen, Mavrovich sold his drawings to German and Italian tourists. 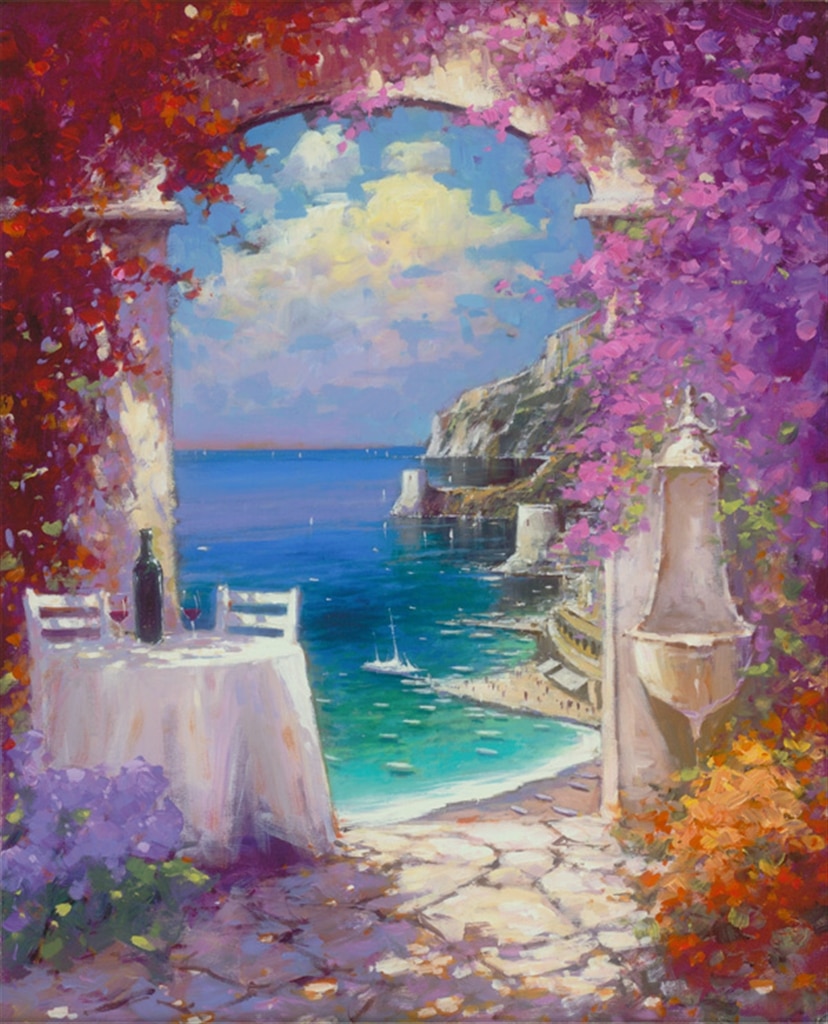 “Down the Amalfi Coast,” Marko Mavrovich

In the late 1970s, there were plans for Mavrovich and his father to hold father-son watercolor shows in Germany and Italy. However, his father grew ill and they canceled the exhibitions. Instead, Mavrovich decided to enroll in Navigation School to become a sea captain and the family’s breadwinner. While at school, Mavrovich continued to draw. He enjoyed working at sea in his years after school, but was torn between pursuing a career at sea or with art.

When his father died in 1985, Mavrovich moved back to California. Mavrovich worked as a commercial diver for three years until a close call with a propeller severed an air hose and grazed his wet suit. Mavrovich had narrowly avoided the loss of a limb. He saw this as a sign to turn his passion for art into his career. Despite the accident, Mavrovich never lost his love of the sea, and began painting seascapes, coastlines, and landscapes. 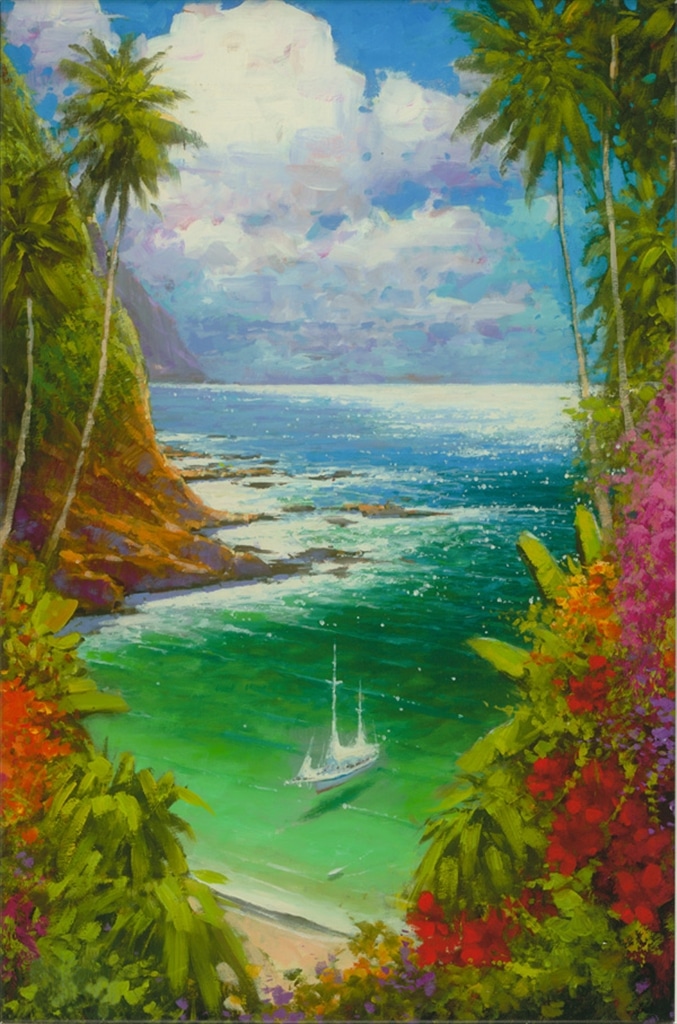 He started to sell his art and garner recognition from local galleries. These galleries gave Mavrovich the exposure he needed to emerge on to the national scene as a painter. His imagery, influenced by the colors and scenery of California and the Mediterranean, caught the eye of many art collectors.

Mavrovich received further recognition overseas, traveling to Japan to paint for six months at a time. Despite his success, Mavrovich felt stifled—he was surrounded by beautiful Japanese culture and architecture he loved to depict in his art, but Japanese collectors preferred his paintings of foreign landscapes and subjects.

In 2005, Mavrovich joined Park West Gallery. His travels with Park West and relationships with his collectors inspire his art to this day. Mavrovich also donates his time and efforts to supporting non-profit organizations that benefit military veterans. 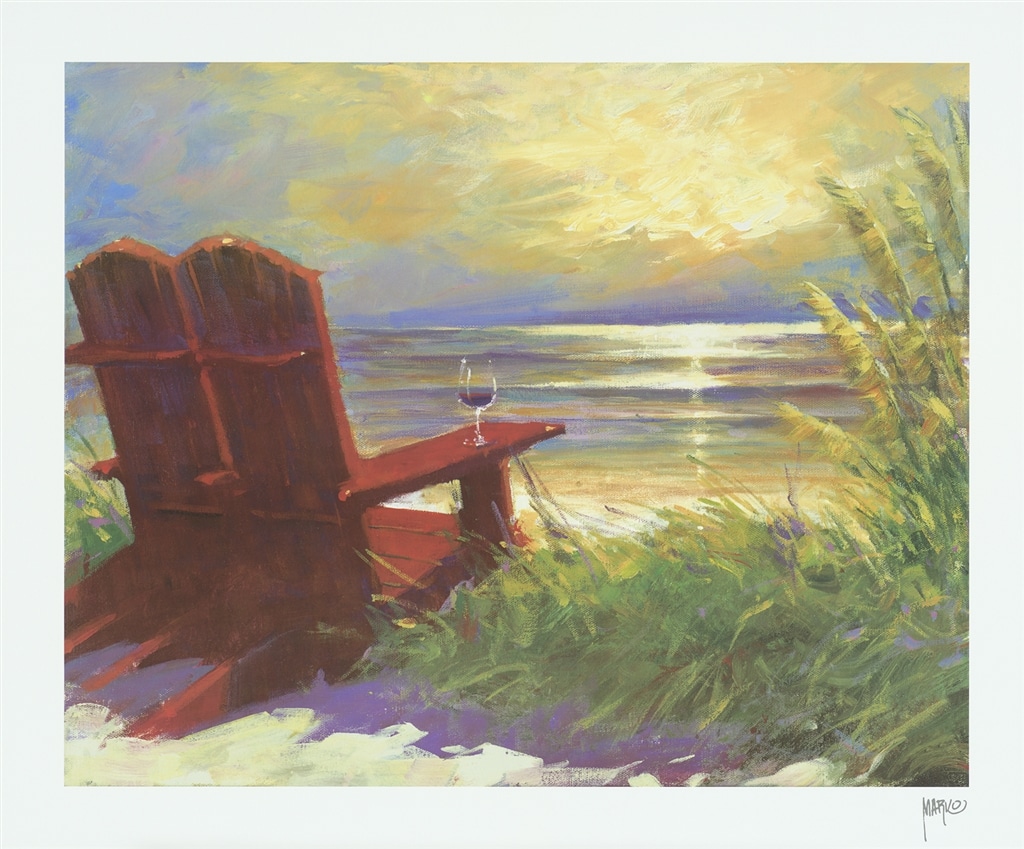 “It Gets Better,” Marko Mavrovich

Mavrovich’s style is unique but methodical; he generally paints water and boats using colors he believes are most representative of California—shades of red and gold. The art evokes serenity, optimism, and peace. The warm colors give a soft feel to his artwork, captivating art aficionados.

Digging deeper into Mavrovich’s art, it is evident that there is more depth to his creations. Inspired by travel, Mavrovich paints more than seascapes. He utilizes darker colors to portray scenes of old cars, the quiet glow of a big city, and many other breathtaking types of scenery. 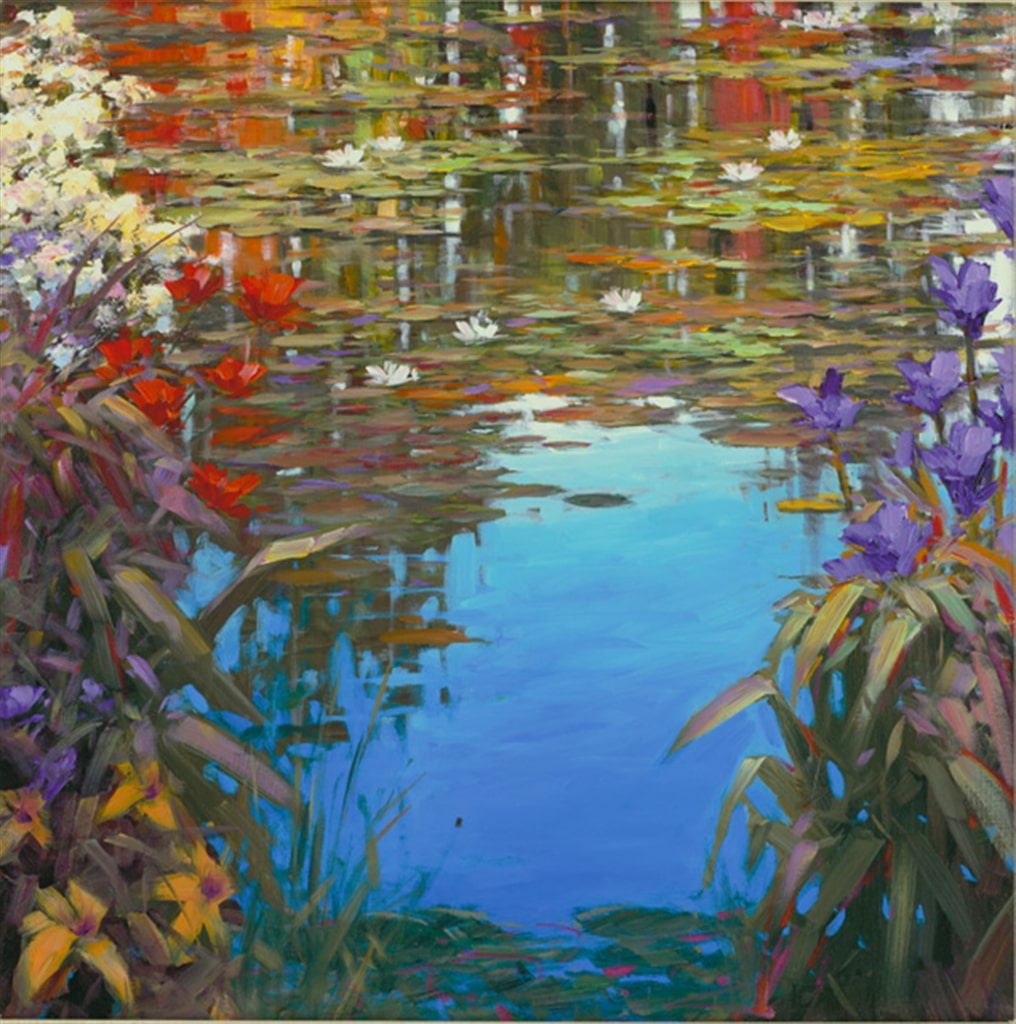 Artists who have influenced Mavrovich include Winslow Homer, John Singer Sargent, and California Impressionists like Edgar Payne. Growing up in California and Croatia inspired his sea-based artwork; he loves oceans, hillsides, and sunlight, capturing their essence in a vivid fashion.

His studio is what he calls “organized chaos” and only he knows where everything is located. Projects that may occur within the next six months are strategically placed around the room so they’re available at all times. He surrounds himself with studies, notes, and supplies.

Mavrovich often finds inspiration from rudimentary materials. Pieces of metal sitting in his studio become a series about old trucks, or wood planks become repurposed as sturdy alternatives to canvas.