Linda Le Kinff was the official artist for both the 1998 World Cup and the 2010 Kentucky Derby. She studied multiple techniques around the world, combining everything from traditional painting to engraving and tempera to form her own unique style.

Her portrayal of women is consistently dynamic, ranging from indescribable loneliness to silent, powerful, and elegant. Le Kinff also finds inspiration in the work of Paul Gauguin, Pablo Picasso, and Gustav Klimt.

Linda Le Kinff was born in Paris in 1949 from French and Brazilian parents. She started her career as a painter at the age of 20. In the 1970s she traveled to India, Tibet, Mexico and Italy.

She lived and worked in Italy for 12 years learning the ancient techniques of tempera, egg painting and the gold leaf method taught by masters in Florence and Livorno. She also served an apprenticeship in wood engraving, copper engraving, and excelled in learning the modern techniques of acrylic and airbrush painting.

In Paris, in 1975, Le Kinff learned lithography, meeting the artists Brayer, Corneille and Lapique. In 1976, she met Okamoto Taro, the “Japanese Picasso,” who introduced her to the sand and sumi technique. In 1981, she spent six months in Morocco where she worked with Chabia, the poetess of the naive abstraction movement.

Le Kinff returned to school in south Tyrol where she became interested in painted, polished and varnished woodwork, using a special material made of casein. She applied it to her paintings and continues to use this technique today but still keeps the traditional approach of painting in acrylic on canvas, as well. She began to create serigraphs in the mid 1980s and excels in the technique.

When it comes to choosing her favorite artistic techniques, Linda Le Kinff struggles. She explains that each technique and medium depends greatly on her subject matter and she pulls from all her experiences to project the essence of what she’s painting.

When she lived in Italy, however, Le Kinff found a rare passion in painting on wood paneling, and it became one of her favorite media. Italy is the place where she truly found herself as a painter and her memories from that time are especially fond. 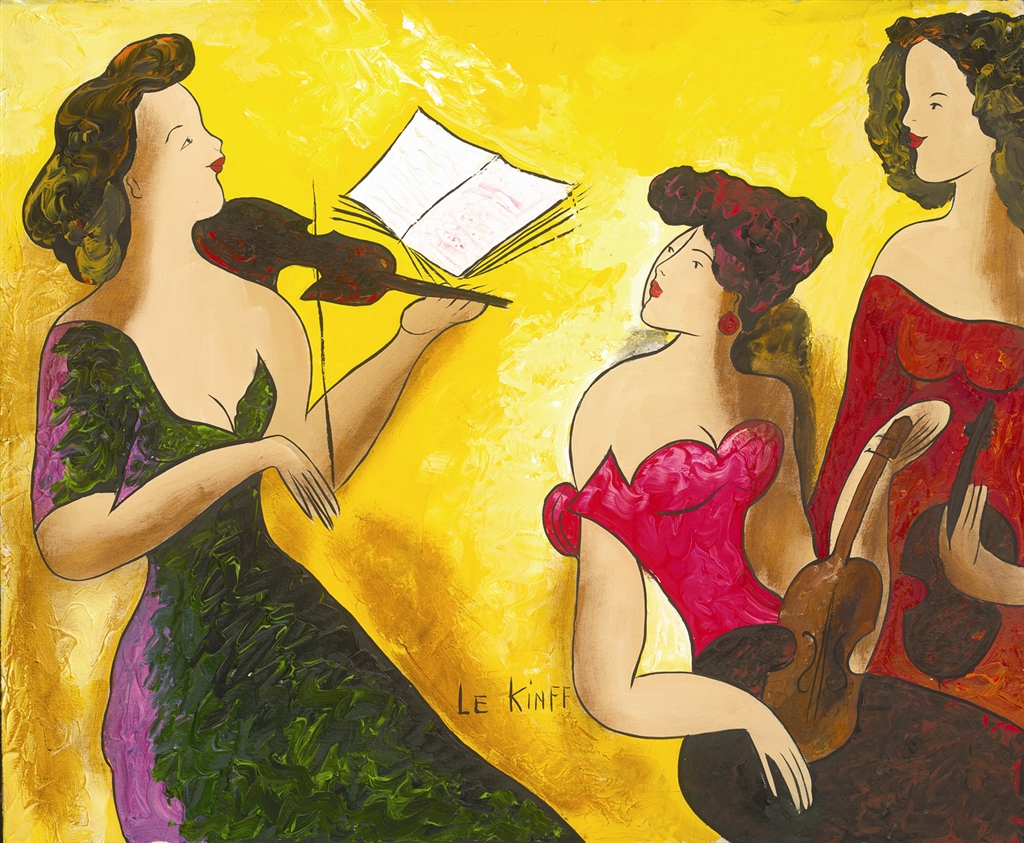 Le Kinff also expresses herself through watercolors or, more precisely, a mixing of greasy pastels, ink and watercolor. Recently, she began to use collage. She works without a model and her inspiration comes from travel, her dreams, reading, and her imagination.

More recently, her color palette has been inspired by Japan and the Scandinavian countries. Each place has its own unique set of colors and Linda tries to carry this throughout her work.

Her subjects are extremely diverse and include musical scenes, poetic interpretations of people caught in an intimate moment of their lives, and couples elegantly dressed, out for a night on the town. She has fallen deeply in love with attending the circus, especially Cirque du Soleil, inspired by the amazing flexibility and movement of the performers.

She also often includes an image of a black cat in her works, sitting near the edge of the composition. When asked, the artist expressed that the cat is there for graphic purposes, balancing the colors and composition of her work. It pulls together the black hair of the women in her paintings and provides a point of reference for the other shapes. 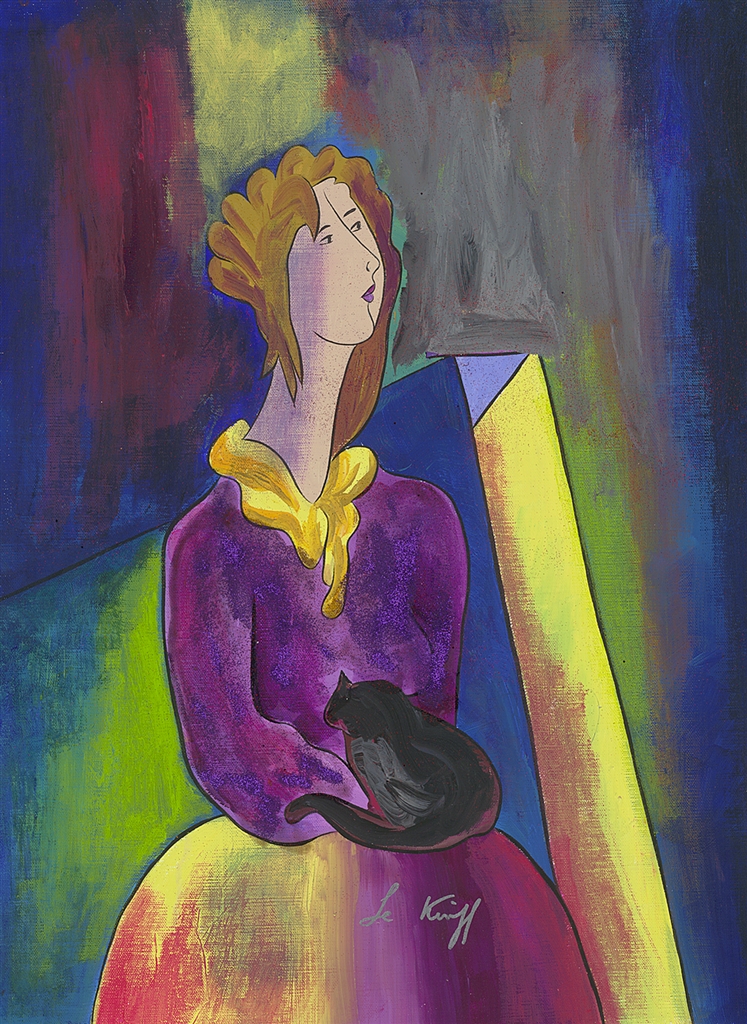 Le Kinff’s studio is her haven. With memories of places she’s traveled posted on the walls, she is able to focus and find her creativity. Rising early in the morning, Linda will work until 6 p.m. in solitude, enjoying her quiet moments to think.

Her influences include the hidden sensuality of Braque, the masterful drawing of Matisse, the elegance of Modigliani and the precocious maturity of Egon Schiele. 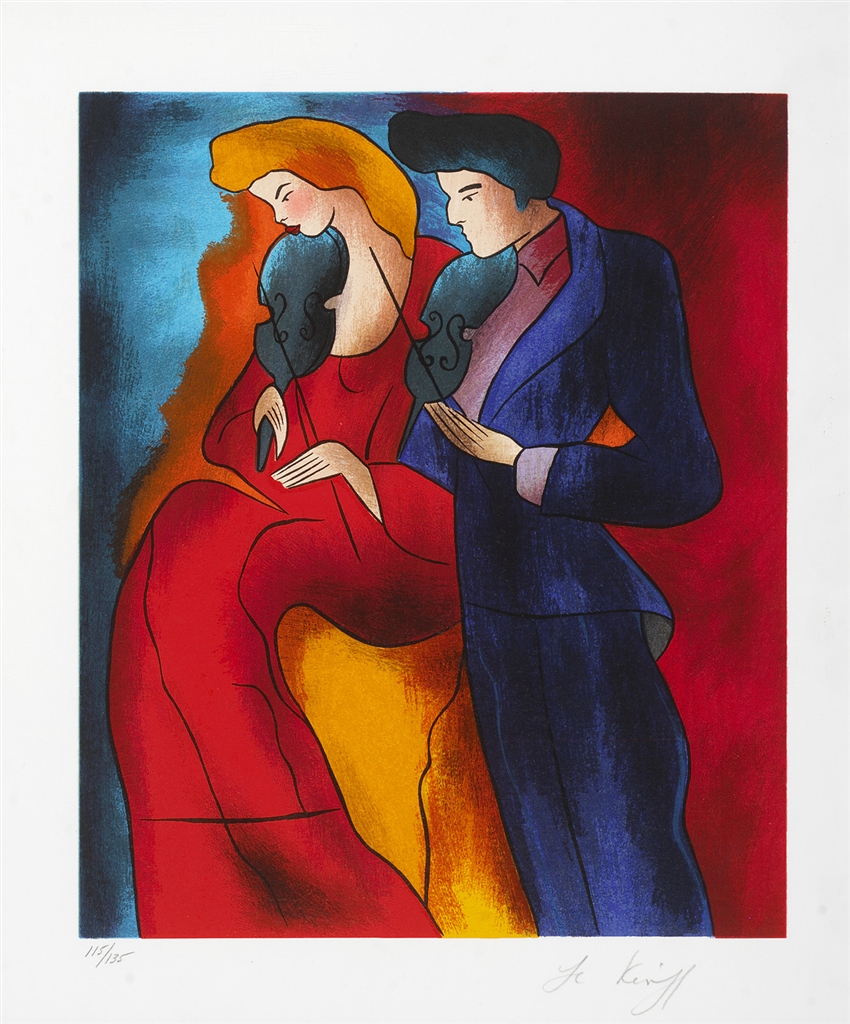 Linda Le Kinff: The Classical Training of a Contemporary Artist

Artist Linda Le Kinff has spent her life mastering artistic techniques from around the world. In this video, she takes us inside her creative process.